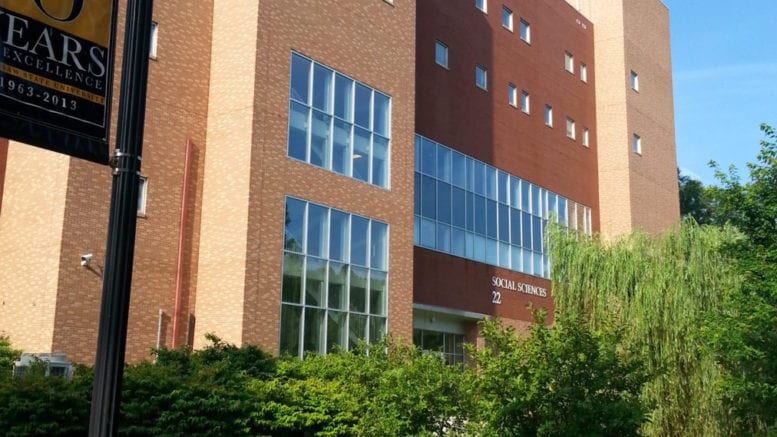 A building on the KSU campus -- photo by Larry Felton Johnson

As of the fall of 2016, Kennesaw State University had an enrollment of 32,166, making it the third largest university in Georgia.  Its programs include more than 150 degrees, from undergraduate to doctoral. KSU experienced rapid growth between 2002 when the university moved away from its status as an exclusively commuter college by opening its first residence halls, and January of 2015 when KSU merge with Southern Polytechnic State University.

KSU is an important educational institution in the state, with a number of acclaimed programs and a growing emphasis on research.  But how did it get its start?

It began its life as Kennesaw Junior College.  In the early 1960s, the oldest of the post-WWII baby boom generation were reaching college age.  Carl Sanders, who won the Georgia governorship in the 1962 election, had long been an advocate for the construction of community colleges throughout the state.  In 1961, when he was still a leader in the state Senate, the Atlanta Constitution reported that Sanders asked for a referendum on new taxes, in part to fund new community colleges because of “the great onrush at the college level.”  During his campaign for governor, he argued not only for the building of junior colleges but that ultimately those colleges should be tuition-free, like the public high schools.

Many counties in Georgia wanted the new junior colleges during those years.  In addition to Cobb County, Bartow County was also lobbying for a junior college to be located in Cartersville.  If the Bartow location were chosen, it was doubtful that a college would be built in Cobb County, because both locations were in the 7th Congressional District.  Sanders had extended a promise to Bartow County that they would be chosen as the site.  Cobb County sprung into action.  They chose a location for the college approximately midway between Marietta and Cartersville, in part so the new campus could be within commuting distance of Bartow County as well as Cobb. Importantly, both Marietta and Cobb County issued bonds to fund the college.  Residents of both Marietta and Cobb County voted overwhelmingly in support of the bonds.

Since Bartow County was slow to present a counter-proposal, the north Cobb location was chosen.  The proximity of the college to Bartow gave Sanders some political cover for reneging on his promise that the college would be in Cartersville.  The groundbreaking ceremony was held in November of 1964.  Soon thereafter, Horace W. Sturgis, who had been an associate registrar at Georgia Tech, became the first president of the school.

The opening of the college was delayed by a series of strikes and labor disputes, but that worked to the college’s advantage in an unusual way.  Since the strikes also delayed the payment schedule for the work, the bond money sat in the bank drawing interest before the college opened, leading to an unexpected amount of money for the fledgling college.

Kennesaw Junior College opened in the fall quarter of 1966. with 1,014 students registered.

Scott, Thomas. Cobb County, Georgia, and the Creation of the Suburban South.

For more information about the founding of Kennesaw Junior College, and Kennesaw State University, we recommend the following book:

Cobb school board candidate prepared to go to court over bullying