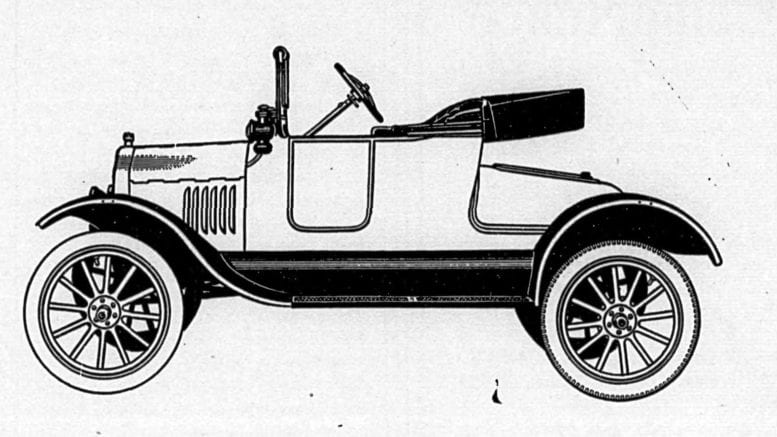 If the first owners of automobiles in Cobb County wanted to drive into neighboring counties, they were faced with a daunting patchwork of complicated and restrictive ordinances, most of them intended to prevent the new contraptions from startling horses.  The state had not yet passed uniform traffic ordinances, and each county enacted rules that seem bizarre by the standards of today’s auto-dominated roads.

Uniform traffic laws and vehicle registration were passed by the state in 1910 to remove the complexity in operating this increasingly popular mode of travel.

But then there were the roads. In the 19th century roadbuilding was a largely communal activity, and the clearing of stumps was not seen as a priority, nor was paving roads.  Horses were well suited to going around stumps and walking over dirt roads.

By the turn of the century, each purchase of an automobile in the county was newsworthy, and because of the treacherous road conditions auto excursions were reported in the press as if the trip were an exploration of the north pole.  The Atlanta Georgian, in June of 1911, reported on a trip from downtown Atlanta to the Sweetwater Park Hotel.  The route took the woman driving the car through south Cobb, and was tersely described by the paper as follows:

In modern terms the bulk of the route was along what is now Highway 78 (Donald Hollowell Parkway and Veterans Memorial Highway).

The road improvement movement gathered steam as automobiles became more common.  In 1915 there were few paved roads in Georgia and no paved highways.  In the late 19th century bicyclists had launched a “Good Roads Movement,” but the effort didn’t take off until 1908 when Ford’s mass-produced cars made automobiles accessible to a larger part of the population.

By 1915 the county had paved a section of road from Marietta to Fair Oaks,  but the serious push for paved roads through Cobb County began with the development of the Dixie Highway.  An entrepreneur named Carl Fisher had bought most of the property on an island near Miami, Florida, and planned to build a resort.  That island is now known as Miami Beach.  He began advocating that a north-to-south network of highways be built from Canada to Miami.

The Cobb County section of the Dixie Highway ran along what is now Highway 41 [Correction: Reader Skip Are pointed out that the route of Dixie Highway through Smyrna to the river actually followed modernday Atlanta Road, and that the section to Acworth followed Old Highway 41 and Kennesaw Avenue].  Even after the highway was designated it was an unpaved road, and according to Temple’s book, locals created a cottage industry of pulling the automobiles of northern tourists out of the mud.  As federal highway funds became available in the 1920s, sections of the highway were paved, starting with the section from Smyrna to the Chattahoochee River.  Then the section from Acworth to the previously paved portion was completed.  By 1929, the road was paved the entire length of Georgia.  In 1930 Bankhead Highway, now Highway 78/Veterans Memorial Highway, was paved, giving Cobb County two major paved routes.

For the rest of the 20th century, the automobile and other wheeled motorized vehicles were rapidly becoming dominant in the county, and our modern road and highway network began taking shape.