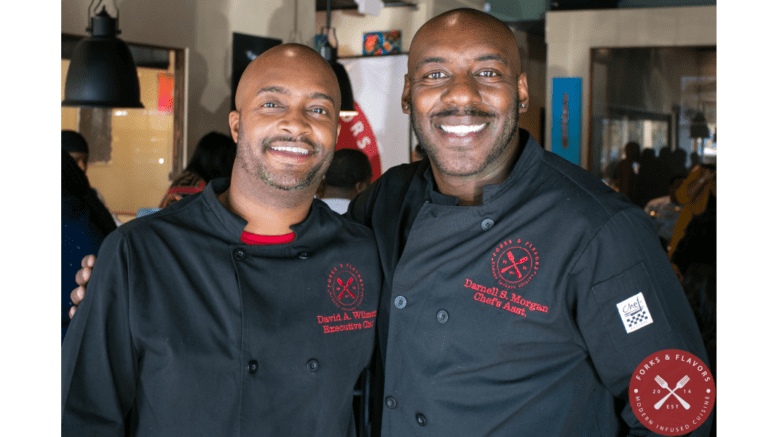 As outraged citizens banded together and took to the streets to protest after what appeared to be a rise in police killings of Black Americans in 2020, one particular Black couple found a more benign approach to form unity from their own love story; they opened a restaurant right in the heart of Kennesaw, Georgia. and tied the knot – for the second time.

Forks & Flavors owners David Wilmott and Darnell Morgan met on Twitter in 2010 and eventually married in 2015. As problems arose within the relationship, Morgan pushed for a divorce and the couple’s divorce was finalized in 2017. The two remained in touch, eventually reconciled, and remarried in Jan. 2020 right before launching their popular cuisine amidst the chaos surrounding police brutality.

“Inevitably, it was love that brought us back together,” Morgan said. “We’ve always been in love with one another. I think I hesitated and just might not have been ready at the time. I knew I had a lot of growing up to do before I could offer myself to him again, and I can honestly say I haven’t looked back since.”

Initially, Wilmott launched Forks & Flavors as a catering business back in 2014. However, during the pandemic, they realized that they could not handle the ample demands of orders and requests they were receiving, and so ensued the birth of their full-service restaurant. What started as a normal evening at the dinner table, eventually became the framework for the beloved local cuisine.

Wilmott describes the plan to launch their cuisine during the rise of the Black Lives Matter Movement as “intentional” and “purposeful.”

“The timing felt right with everything as far as having the proper funds to open a restaurant and having the time needed to do it,” said Morgan.

“Every time you come up in here, you’re going to have a good time,” said Michelle T, a frequent customer at Forks & Flavors. “You can tell the owners love their customers and their employees.”

While Forks & Flavors is no stranger to success, the restaurant witnessed a significant increase in customers after the video of George Floyd’s murder went viral. This forced a revealing spotlight on racial inequality in all its unjust forms — including business.

Racism provides no relief whether it be endured or merely talked about. A cavity at its core, this distinct form of discrimination unremorsefully burrows itself inside its victims and perpetrators, demanding to be felt.

Corporate America remained mostly silent during the 2014 protests following the death of 18-year-old Michael Brown, who was fatally shot by former Ferguson, Missouri policeman, Darren Wilson, and Eric Garner, who died after Daniel Pantaleo, a New York City Police Department officer, put Garner in a prohibited chokehold before arresting him while he repeatedly cried, “I can’t breathe.”

Were it not for the gnawing pang of familiarity resulting from Floyd’s murder, widespread demonstrations of protests and rallies would not have emerged as urgent as they did. Today marks a time when you can’t think of the word “conformity” without simultaneously thinking of “complicity”.

The national reckoning brought on by Floyd’s death irrevocably placed fresh attention on Black companies. The uncertainty and racial tension created by Covid-19’s disproportionate toll on people of color added immense pressure to corporate America. Popular brands like Nike, Fitbit, Amazon, and Facebook began attempting to atone for their involvement in the unfair treatment of people of color within the workplace.

While Morgan and Wilmott along with current Forks & Flavors employees and guests were in avid support of America’s prolonged fight to dismantle white supremacy, they had their doubts lingering at the back of their minds like a bitter aftertaste, and for good reason, remained skeptical. The unprecedented outpouring of support was met with blunt criticism from multiple angles.

As the mayhem surrounding the coronavirus news settled, the media noticeably decreased their coverage of reported police brutality against Black people. The BLM movement encouraged customers to invest in Black-owned businesses, however, owners of those businesses worried the support would not last. On the surface, it was a tempting sign of ally-ship, but was a real paradigm shift underway, or was this merely a performance stemming from fear of being labeled racist?

Despite its notable achievements, America remains a country where the intent behind Black and Brown dreams continue to be overshadowed by a wrongness so old and pervasive it might never truly leave.

“When all of this took place, it seemed like everyone was unambiguously aware of the problem and sort of pledged to implement ways to change the system,” said Maleekah Smith, who was at the restaurant with her girlfriend for brunch. “I just hate that Black people have to die for folks to really start caring, you know?”

“I feel the same,” added Shani Black, girlfriend of Smith. “Every once in a while, something like this happens. People will pretend to care while things are amped up. Now everyone has taken down their black squares on their Instagram feed, and BLM out of their bio, but [Black people] are still dying.”

The black square Smith referred to was a movement launched in June 2020 by music executives Brianna Agyemang and Jamila Thomas, Senior Director of Marketing at Atlantic Records, who noted that the current American music industry “has profited predominantly from Black art”.

On Tuesday, June 2, 2020, Over 28 million Instagram users including major celebrities, brands, and influencers posted a plain black square to their account, bearing the hashtag #blackouttuesday before pausing their usual social media feeds for the day. The move stood in solidarity with today’s music industry blackout supporting the Black Lives Matter movement. However, many Black people were quick to point out its largely performative nature, arguing that this did not represent true solidarity.

“The support is nice and all, but this has always been our fight. Things like BLM and Black History Month exist for them,” Morgan said.

When asked about how it feels to be credited as a successful Black-owned business in Kennesaw, Wilmott revealed that the pair never attributed much meaning to the title until recently.

“Knowing that we are recognized as Black-owned business really empowers us, as we are still in a society that doesn’t accept Black ownership and B

Further into the afternoon, an older White couple walked in but appeared immediately taken aback when met with the boisterous nature of the restaurant. The woman approached the bar, and asked the bartender to turn down the music to which the bartender politely smiled and responded, “we keep our music this loud.” The couple, shaking their heads, quickly returned back to their car in vague annoyance.

“That right there is what I’m talking about,” said Morgan in response to the couple’s behavior. “We get a lot of White people in here with the utmost audacity. If you don’t like the environment, take your [stuff] and go somewhere duller.”

If you haven’t caught on by now, Wilmott and Morgan are a married gay Black couple. The societal persecution of Black gay men is nothing new to the pair, and they continue to do everything they can to ensure it does not happen within their workplace. Forks & Flavors has a zero-tolerance policy for homophobia, especially from customers who might take issue with their union.

“Customers are more drawn to us because of the environment we encourage. We are loud and we like to have fun,” Wilmott said. “A lot of people love the dynamic of Forks & Flavors because there’s nothing fake about us. We are who we are, and we are not going to apologize to you to make you feel comfortable.”

“It’s my first time here, and I didn’t think it was possible to feel so welcomed at a restaurant. The food is great, the music is great, [and] the atmosphere is great. 10/10 would recommend for sure,” newcomer Yara Upton said.

According to the Kauffman Foundation’s annual study, the pandemic saw a significant boom in the rise of new Black-owned businesses-the largest surge in the last quarter-century. Black entrepreneurship was reported to rank higher than White-owned and Asian-owned companies in 2021.

Forks & Flavors continues to thrive thanks to the support of loyal customers and influx of new ones, however, it is important to clarify that the restaurant does not ascribe its success to the progressiveness of the current political climate.

“We are obviously so thankful for the advocacy, but we only want to receive it from the people that sincerely want to be here — not from those who see this as a means to appear non-racist,” said Morgan.

As for the future of their business, Morgan and Wilmott have hopes to open Forks & Flavors in every major city in America.

When alluding to what the restaurant might look like in the years to come, Morgan said, “we just want to continue owning the restaurant and run it as self-sufficient.”

Currently, the couple is actively building a Forks & Flavors in Houston, Texas, and have plans to open in Washington and Los Angeles later this year.

About the author, Abisola D. Dahunsi

I am a Nigerian-born (developing) journalist currently attending Kennesaw State University for my undergraduate degree in journalism. A storyteller at heart, I am constantly trying to toe that blurred and fickle line between being a sort of vessel for which marginalized communities can present their stories but never speaking over the voices that need to be heard as they are.