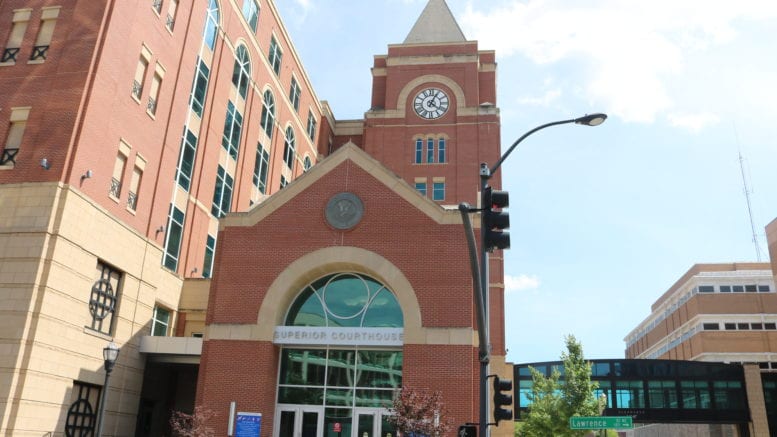 My name is Angelia Pressley, and I am the Managing Partner of AP Advertising & Public Relations Worldwide LLC, a boutique marketing agency located in Smyrna. The company handles sustainable communications, issues and crises management, research and data analysis and branding for environmental, medical, auto, governmental and educational fields. I am looking forward to bringing interesting and noteworthy articles to the Cobb County Courier through my column, “Oil in My Backyard.”   This first article gives insight into public safety and where the area is headed in this respect. I welcome your feedback, and hope you will take the short survey at the end of this article. I look forward to getting to know you better through your comments.

Raise your hand if you have not heard the common complaint in a business association meeting, among friends or in heavy crime communities, “we need more officers to keep our community safe.”

After all, everyone wants safety, but who counts the cost for it? As it stands, recruitment is low for police departments overall. According to an article in the January edition of the Economist, after the rebounding economy, the #2 reason why good officers are hard to find is civil unrest around the country about policing. Los Angeles had a deficit of 100 officers in December and Philadelphia had 350 vacancies (The Economist, 2017). By comparison, Cobb County was down by slightly over 100 as of last December (Heaton, 2016).

Several incidents in the past several years have highlighted that Cobb is not immune to these issues. The SCLC and NAACP demand for an investigation into the shooting death of Nicholas Thomas by a Smyrna police officer, the incident in which District 4 Commissioner Lisa Cupid was followed by a Cobb County officer, and the encounter a black male Atlanta teacher had with the same officer,  have underscored the need for proactive measures in the Cobb County Department of Public Safety. Though public safety also involves animal control, fire, 911, and other services, these incidents involving police have dominated the media.

They have also taken up much of the department’s time and attention as it sought to address pressure from community organizations, such as Citizens for Public Safety (CoPS) and the SCLC.

Fortunately, Cobb residents and officials have demonstrated a desire to have a positive engagement in developing solutions for problems in policing. The Cobb County Department of Public Safety (CCDPS), the Cobb County Board of Commissioners, CoPS, Austell Community Task Force, Mableton Improvement Coalition, SCLC, NAACP and everyday residents have rallied in community forums like Bridging the Gap, made recommendations on new policies to identify officers who violate the code of conduct, and lobbied for the newly released report by the International Association of Chiefs of Police, which was an in-depth study of the Cobb County Police Department (IACP, 2017). These conversations happened because all sides could agree on a common goal, and that is to keep their respective tribes alive.

The department has in its favor one of the best E-911 Communications Bureau in the country.  Also, the CCDPS was ranked in the top one percent by the Commission on Accreditation for Law Enforcement Agencies, the highest standard of national accreditation, for the fifth consecutive three-year accreditation period. The Cobb County Board of Commissioners approved a budget for body cameras–one of the key answers the public and police agree should be required for law enforcement (Morin, 2017). In addition, officers were recently approved for a sign-on bonus and take-home vehicles. Moreover, the director of CCDPS, Sam Heaton has been cooperative in listening to concerns and requests from various NGOs (CobbCounty.org, 2017).

The New Chief in Town

The search committee and Board of Commissioners agreed Chief Mike Register would fill the position, and many community members and staff have expressed satisfaction with the new hire. Register is the former chief of the Clayton County Police Department, and was responsible for a 500-member staff and a $40 million budget. He worked in the U.S. Army Special Forces for 22 years, with combat duties in Afghanistan, and worked on projects with the FBI and at the Pentagon. He also had a previous background with Cobb County. In his June 7 speech to the Fraternal Order of Police Register he used words and phrases like inclusion, reputation over filling quotas, promotion-based performance and other terms to suggest Cobb County is moving in an optimistic direction where all citizens are given equal consideration from law enforcement (Register, 2017).

Better to be Safe Than to be Sorry 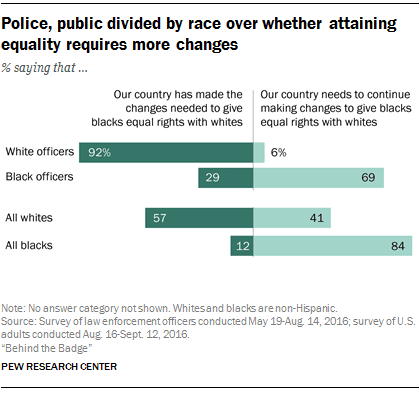 Chart from Pew Research — used as per Pew’s terms of us at http://www.pewresearch.org/about/use-policy/

Still, several facts remain about race and the progress Americans, in general, have made, and the current situation is an ongoing threat to life — unless neighbors work to resolve the racial barrier. This danger to loved ones has to be the motivating factor for change. A national Pew study reveals that Police and public are still divided by race over whether attaining equality requires more changes (Stepler, 2017). Many factors contribute to individual views and opinions, such as age, income, political socialization, past experience, and even current environment. The recently released IACP report emphasized Cobb County lacks this important data. Other findings of the report recommend increase in personnel, more community policing and a co-production model, where members of the community take an active role in helping to craft law enforcement policies.

To determine next steps to aid public safety and society in continued discussions and resolutions on positive race relations, and to gauge where the Cobb County stacks up against national public safety polls, AP Advertising & Public Relations is conducting an independent study to give all citizens an opportunity express themselves around policing or public safety in general.

Please take five minutes to complete a short anonymous survey, and provide your input for contributing to sustainable communities on public safety. Otherwise, there is a danger Cobb will fall into the crisis of police-community relations plaguing the national environment. The answers are confidential, and intended to be random to represent the total population and not simply a few. Continue to be a part of the process or join in now and encourage your neighbors to participate in the  Moving Forward in Cobb County Public Safety Survey by clicking on this link. (Cobb residents only please).