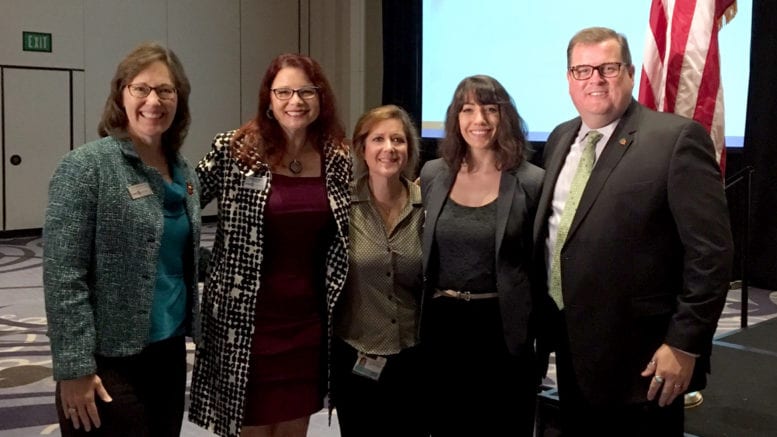 A local business has tallied five different awards for its work with several other Cobb-based organizations this year.

Located on the Marietta Square, 524 Creative is a marketing firm that helps local businesses grow their image and their exposure. April and Scott Wright are the co-founders and principals of the firm.

“It’s definitely a team effort between everyone involved,” Scott Wright said. “We like to share it with [the clients] because, again, we wouldn’t be getting the award if it wasn’t for the trust that they had in us to help them with what they were doing.”

Three of the five awards were earned for 524 Creative’s work with the Town Center Community Improvement District, the organization responsible for local projects like the Skip Spann Connector and the recently opened Aviation Park.

First, 524 Creative received a Silver W3 Award for its work on the Town Center CID’s website, designed and built from scratch. The firm also won two Silver Davey Awards for designing the CID’s logo and compiling its annual report.

A third Silver Davey Award recognized 524 Creative’s social media initiatives, particularly the firm’s work with Henry’s Louisiana Grill in Acworth. When the restaurant needed to bring people into the establishment for a filming segment, 524 Creative made a post on Facebook that reached more than 40,000 people and brought hundreds of patrons.

The last accolade was a Gold Davey Award, the competition’s highest honor, which acknowledged the redesign of the website for Blue Sky Exhibits. Also located on the Marietta Square, Blue Sky works with industry giants like Delta Airlines and L’Oreal to create visually striking trade show exhibits.

“People want to look at the work,” Scott Wright said. “When we were talking to them about revamping their website, we knew we had to do something that was really going to show off the work that they did, to really show off the exhibits.”

In all, 524 Creative took home four Davey Awards and one W3 award, and each competition has a different audience. With more than 5,000 entries, the W3 Awards focus on work created for the web. While the International Davey Awards are not limited to online content, this competition is specifically geared toward smaller firms and companies, with nearly 4,000 entries.

“We have won Davey Awards in the past, but we haven’t won this many at one time,” April Wright said. “I was really excited that we had won four of those.”

In addition to the firm’s work, April and Scott Wright also donate their time and design services to local nonprofits and do partial pro bono work to benefit community organizations. Whether it’s through their charity efforts or their work with their clients, both principals at the firm stress the importance of their relationship with the community.

“I’m most passionate about just helping organizations succeed, and really we wouldn’t be here without them and their support. We’re just one component,” April Wright said. “We wouldn’t be able to do it without our relationship with [the clients].”

Though 524 Creative began in Florida in 2005, April and Scott Wright moved to Cobb County in 2008 and have worked with companies and organizations in Marietta, Kennesaw, Acworth and surrounding cities for nine years.

“We love the school system, we love the area, we love the four seasons,” April Wright said. “It’s just become home for us since then, and I think it was the best decision we’ve ever made.”

From Colombia, to Florida to Marietta: country singer-songwriter Lala Nicole