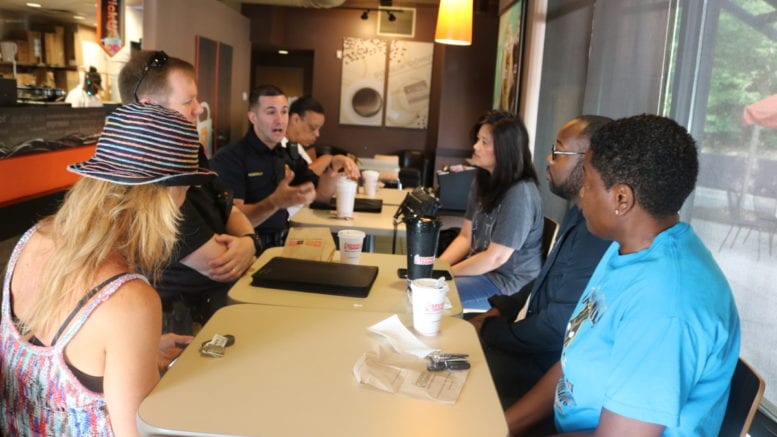 There was a good turnout for the Precinct 2 Coffee with a Cop, as Officers Penirelli and Conwell of the Cobb County Police Department‘s Community Affairs Unit answered questions and listened to the concerns of residents. Among the topics were speeding, neighborhood parking, and code enforcement. The gathering was at the Dunkin Donuts on Veterans Memorial Highway, across from the intersection with Buckner Road.

Penirelli said that prior to becoming part of the Community Affairs Unit, he was assigned to working with code enforcement in situations where police involvement was required. He had also been the Field Training Officer for Conwell when Conwell was first hired. At one point  Penirelli said that everything Conwell does right he had taught him.  A neighbor quipped, “And everything he does wrong was because he didn’t listen.”

One neighbor asked the officers to tell their weirdest experience as an officer.  Officer Conwell told a story about difficulty officers had in subduing a panicked man who was naked and under the influence of hallucinogenic mushrooms.

As the conversation continued other residents and officers arrived, including Sgt. Tatroe, who is in charge of the Community Affairs Unit across all five precincts.  When a resident asked what recourse is available when a next-door neighbor has a dead tree in their yard, Sgt. Tatroe made a call to get an answer to the question.  There evidently isn’t much recourse because of recent changes in policy, but the officers advised registering a written complaint to the neighbor anyhow, to document the problem.

Future Coffee with a Cop events

Coffee with a Cop is held periodically in all precincts. They provide Cobb County residents the opportunity to interact with police officers in an informal setting. The next one scheduled is in Precinct 3, on June 25 at 6 p.m., at the Chick-fil-A at 2485 Cumberland Parkway, at the intersection with Paces Ferry Road, near the Publix and Home Depot.

See more photos of the event in the slideshow below: 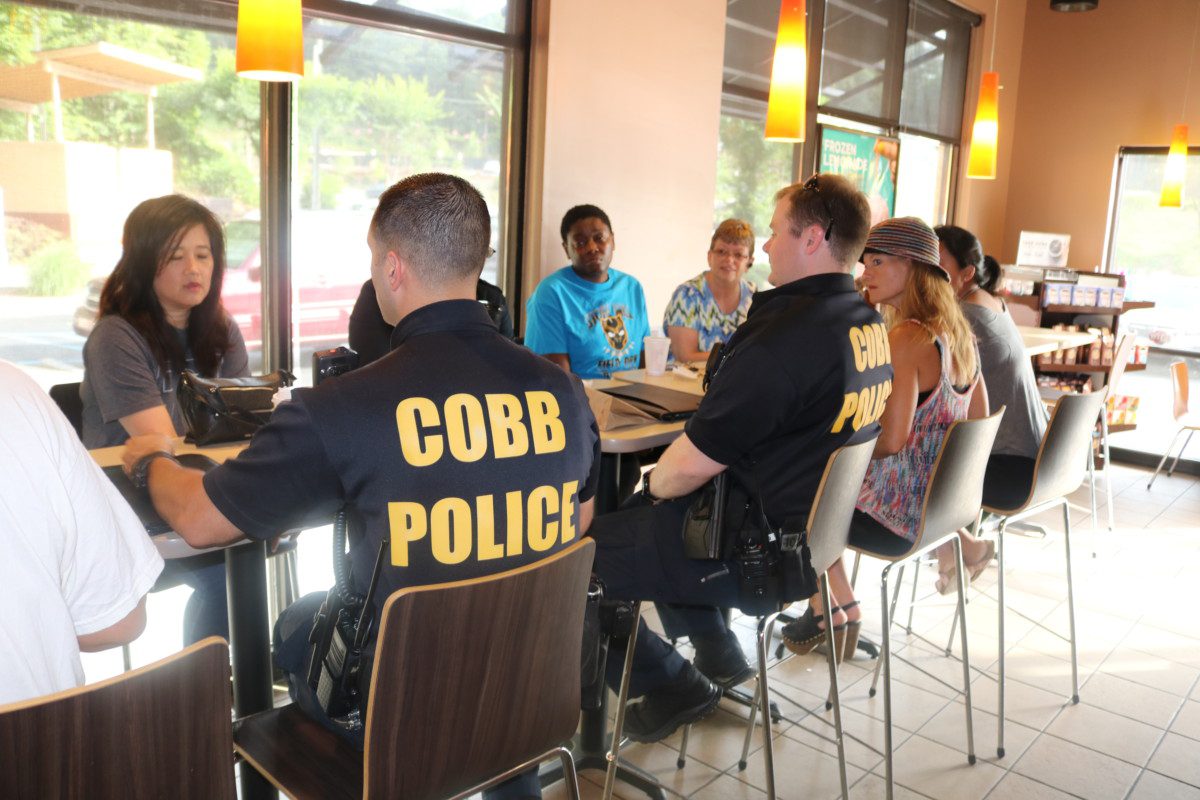 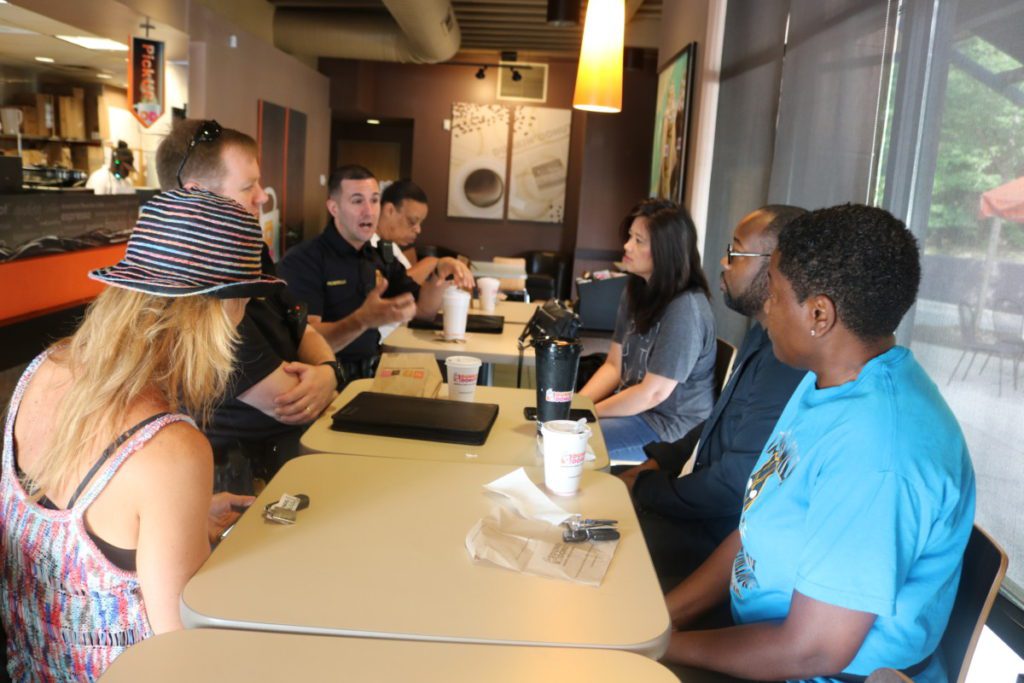 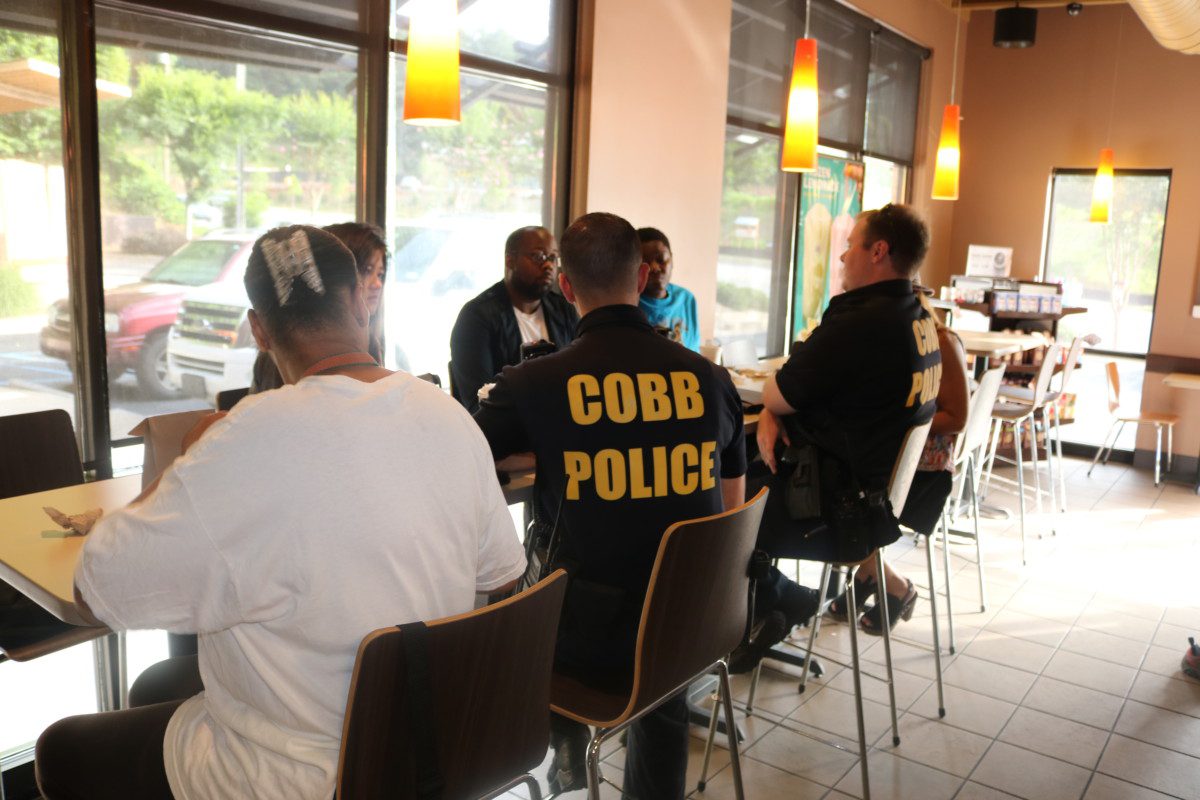 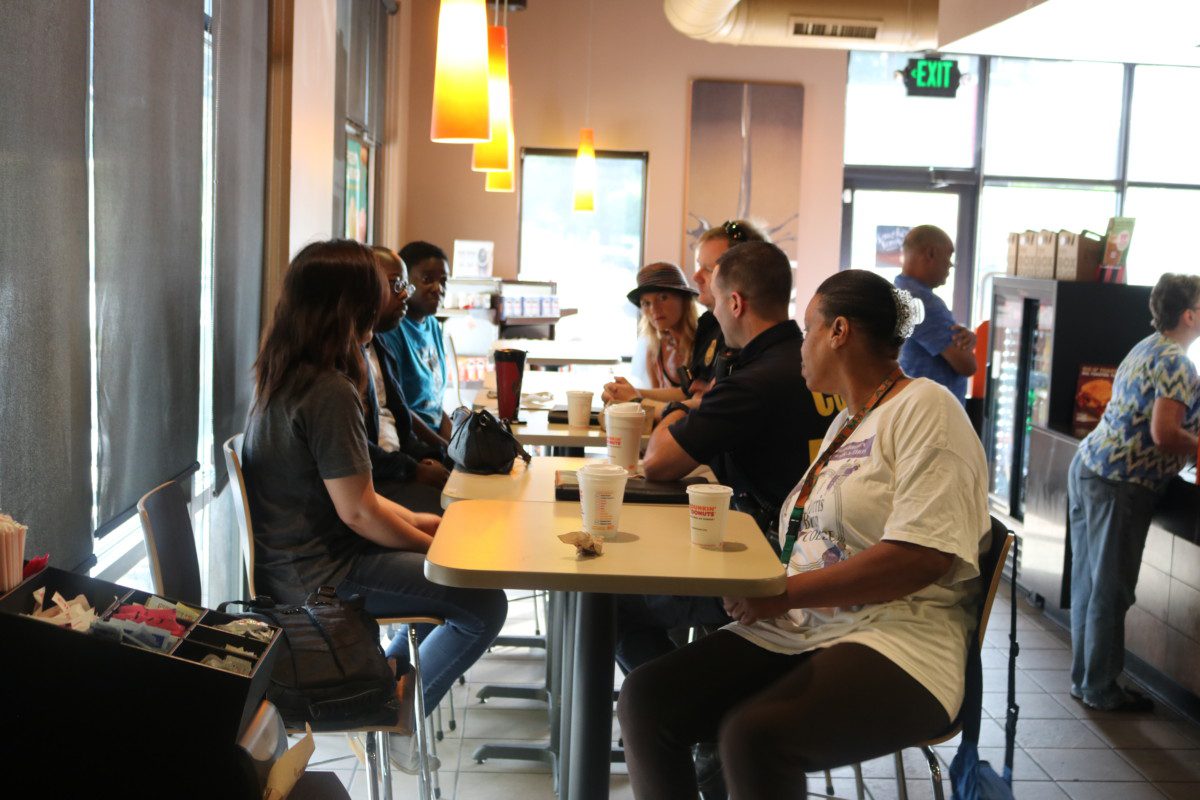 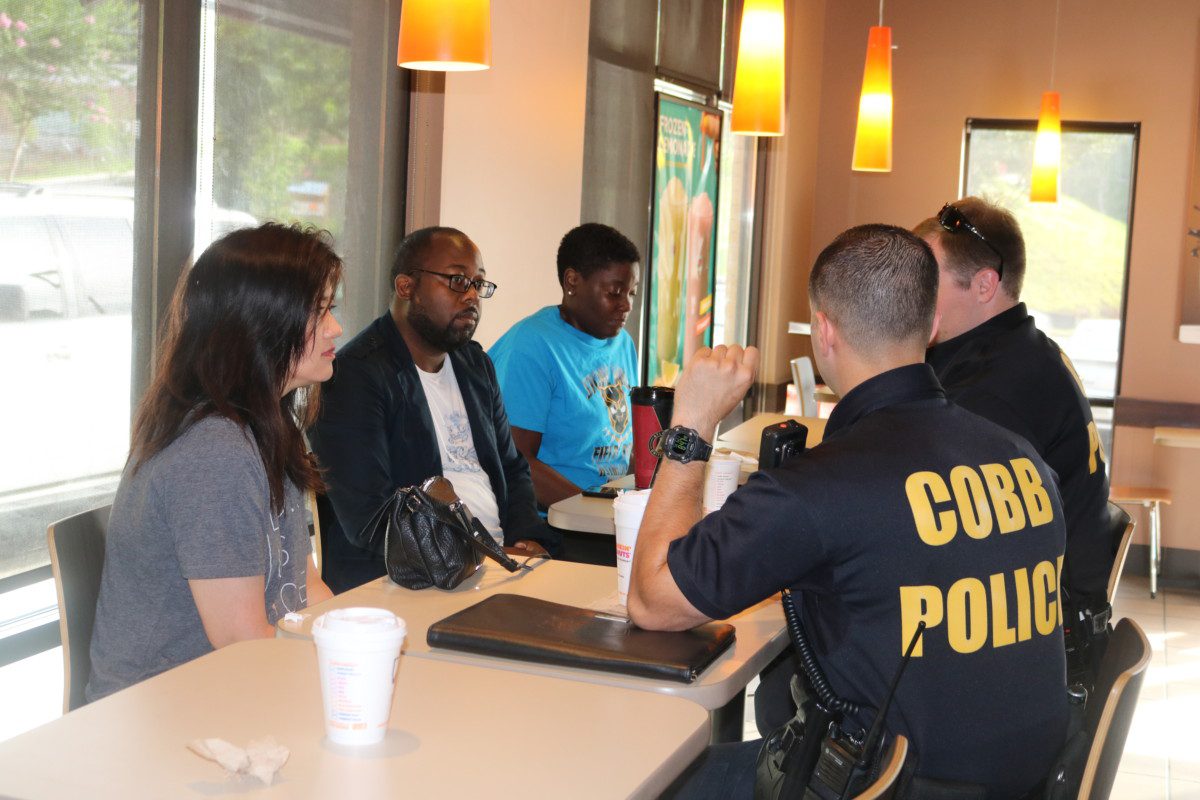 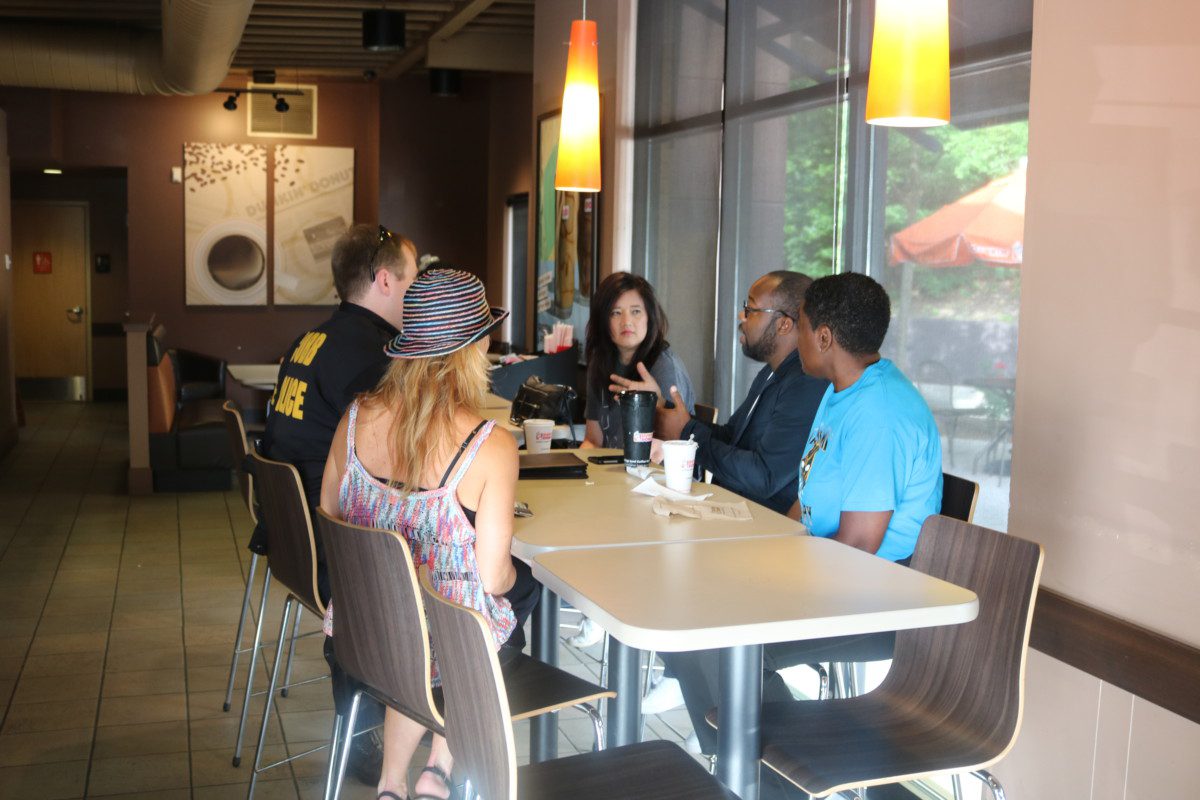 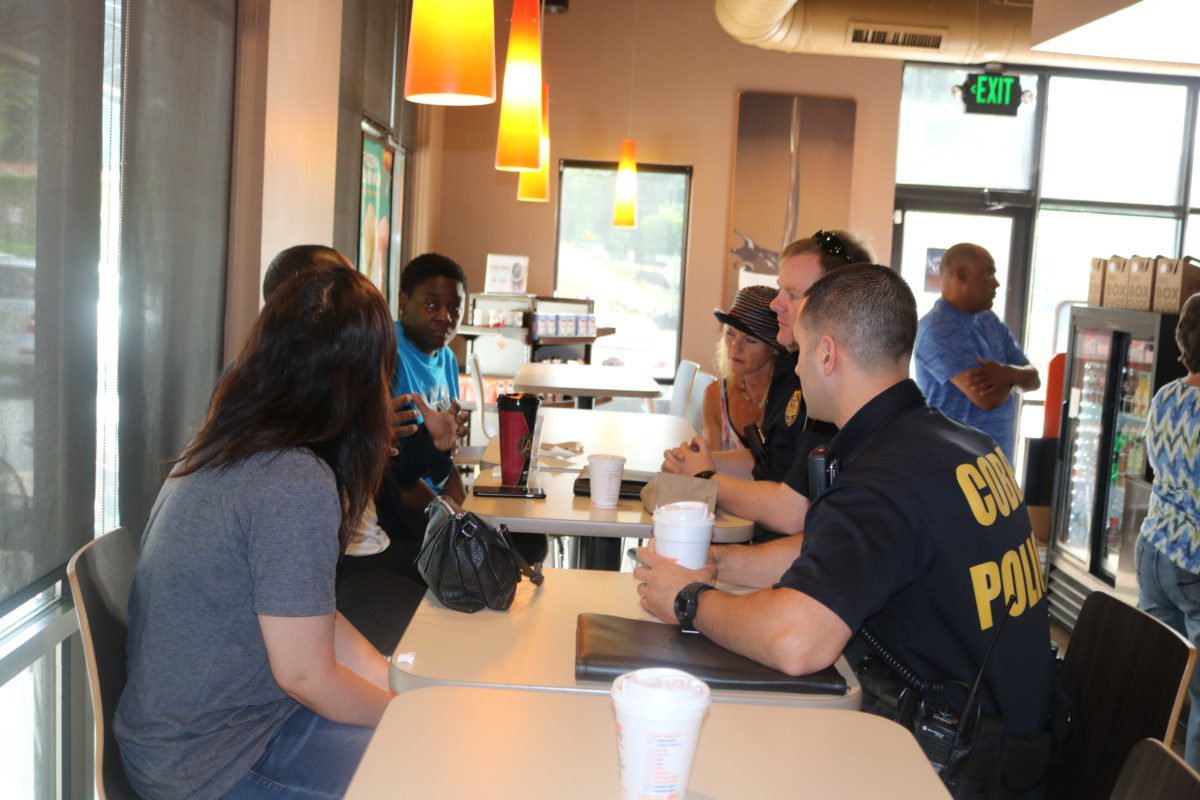 Coffee with a Cop on Veterans Memorial June 21

Marietta Coffee with a Cop at Cool Beans

Coffee With a Cop Schedule