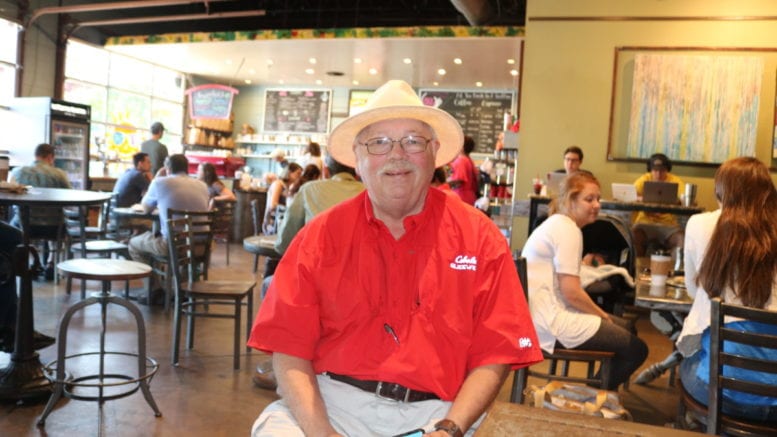 Jim Williams lives in Smyrna and is a volunteer legislative ambassador for the Georgia Alzheimer‘s Association for U.S. Congressional District 13. We met in the popular Smyrna coffee shop Rev Coffee Roasters last Friday morning and he gave an account of what his organization is doing to improve the lives of people with Alzheimer’s disease, and their families.

He said, “There are 14 Congressional districts in Georgia.  Each Congressional district has its own ambassador.  And as we interface with that U.S. Congressman, and his staff on a regular basis … we develop action teams that help us.  And the action teams are small number of individuals, maybe three or four people that assist me in efforts such as writing letters to the editors, using social media to get out the message of Alzheimer’s and what we’re doing to try to improve the living conditions and lives of people with Alzheimer’s and their families.”

He outlined both the direct services the Alzheimer’s Association provides and its legislative priorities.

“The association offers services, referral services, support group services, a helpline that reaches out nationally to any families or anyone that has questions about the disease.  And they operate the helpline 24/7, which is a great service to the community. Everything the association does for the general public is free of charge,” he said.

He said, “My involvement is more on the legislative end. I’m a legislative ambassador for the Alzheimer’s Association, and I have been since 2009.  In that role I worked with our U.S. Congressmen, to promote bills, and get bills passed through Congress that help Alzheimer’s patients and their families.”

The current legislation the Georgia Alzheimer’s Association is supporting is House Bill 4256, known as the Bold Infrastructure for Alzheimer’s Act.

Williams said, “What it does is set up an infrastructure, educational and medical infrastructure around the country and the goal is the earlier the diagnosis, the better care planning can be done, and we can limit the hospital visits we have today by Alzheimer’s patients, just by a better care plan, and having them involved in their own care plan while they still have the cognitive ability to participate in their own future.”

Williams said that the congressman representing his district, David Scott of District 13, had signed onto the bill as a cosponsor and that the Alzheimer’s Association is working on getting Georgia’s two senators, Isakson and Perdue, on board with the Senate version of the bill.  So far 50 U.S. Senators have signed onto the bill.

“We’re also working on a $425 million research request through Congress,” Williams said.  “Two weeks ago the Senate passed it.  So it is back to the House.  The House has to reconcile two sets of numbers.  The House Appropriations Committee had approved $401 million, and the Senate approved $425 million, so they’ll have to meet, and hopefully, by the end of the year, that’ll be the fiscal year 2019 budget … we’re hoping they will come out with the $425 million ask.  That research money goes to the National Institutes of Health (NIH).”

Williams gave some statistics on the impact of Alzheimer’s disease, nationally and in Georgia.

“Many times the families are the primary caregivers for Alzheimer’s.  This year alone, our society total, which includes Medicare and Medicaid, will spend $277 billion to take care of Alzheimer’s patients nationally. Here in Georgia, we have approximately 186,000 Alzheimer’s patients that have been diagnosed. How many others out there that have yet to be diagnosed is a hard number to get to,” he said. “One in three seniors, it is estimated, will pass away with Alzheimer’s.  As our population grows older and older, aging is one of the highest risk factors for the disease, but it is not the cause of the disease.”

I’ve seen snow this year, but not in Cobb County

Be the first to comment on "Jim Williams: Alzheimer’s Association legislative ambassador"