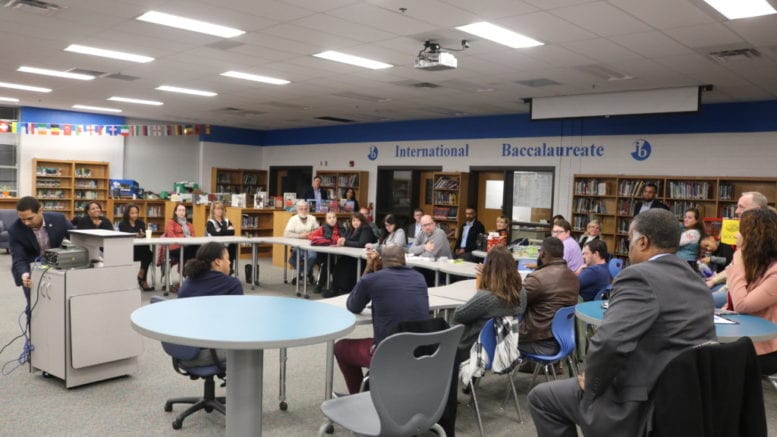 Overcrowded schools, Cobb County’s senior tax exemption, and equity between schools in different parts of the county were among the issues discussed in an education roundtable discussion at Campbell Middle School hosted last Thursday evening by incoming Board of Education members Jaha Howard and Charisse Davis. 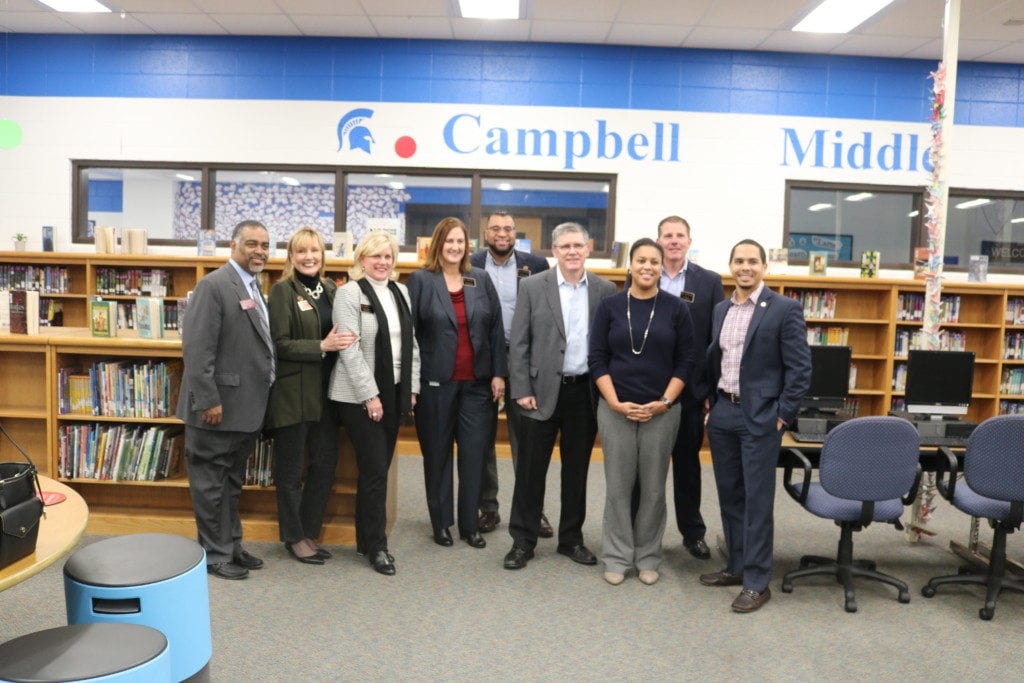 The purpose of the education roundtable

He said, “We’re two incoming school board members.  We’re happy to represent a lot of this area, in Smyrna,  Vinings, up into East Cobb.  We want to try to open lines of communication a little bit more and just kind of hear one another … That’s what this is about.  It’s a  round-table discussion where we can just talk.  There really is no star of the show, it’s really a community thing, and we’re excited we have a lot of folks who play a lot of different roles in the community, and we want to hear from one another.”

“The goal of this … it’s not a complaint session, it’s not a cheer-leading session, but it is something to say ‘Hey, this is on our minds, and maybe we can talk about some solutions.’ I have a personal philosophy that I don’t want to bring any problems up if I’m not a part of the solution. Otherwise it’s just complaining, so let’s not do any of that,” he said. 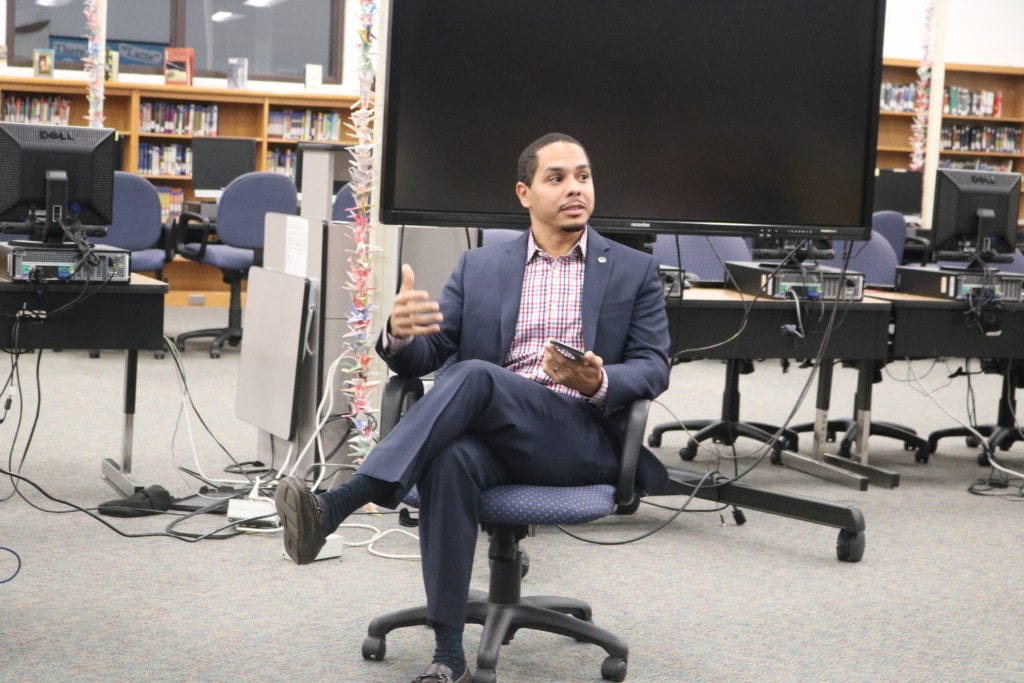 Howard asked for a discussion of the brick-and-mortar projects funded by the education Special Purpose Local Option Sales Tax (SPLOST).

He said,  “Our area is experiencing exponential growth … surpassing projections, and those of us that live in this area, we kind of feel it. Nickajack (Elementary) is growing so much that we have lots of extra outdoor class facilities. We have a lot of growth. And it’s because people want to be here now. It used to be people were moving out of here as quickly as possible. Now people are staying and moving in. So we have this kind of double-whammy happening. Which is a good thing, but now how do we handle this growth?”

“There are some things that are not specific school issues. Some are district issues, some are state issues. At the end of the day we’d all like to throw money at a problem, but that can’t be everything,” Howard said.

Howard said that money to the schools come from county taxes, the state, and SPLOST, and that SPLOST is intended for the more brick-and-mortar projects.

Cleo Anderson, a parent with children at King Springs Elementary School and Griffin Middle School, said, “Anyone can see what’s on the (SPLOST) list, and what’s on the previous list. But then you get into the transparency, the details … I think that’s where it gets difficult. There’s this list, and you know this thing is out there, and there’s all this money, but then again, as the stakeholders, it then seems to get harder for us to have a voice there, because it’s really already decided.”

Howard said SPLOST has a notebook, and the school district is on the fifth SPLOST starting January 1.

Tre’Hutchins said he is on the Facilities and Technology Committee, for Post 3 SPLOST projects. He said the committee looks at the projects that are going to be presented to the school board, and makes sure the money is spent according to how it was budgeted.

“With that being said, some of the concerns that I have noticed (are) how projects are determined, and who gets priority. Who get first build, second build, third build and things of that nature.

He said there is no formal policy on that.

“And that’s one of the items that is of concern,” he said.

He said that many schools on the southside had large mobile classroom facilities. Although his area is excited about the upcoming construction of Harmony-Leland Elementary School, the area is bursting at the seams, he said.

“Those are some concerns about meeting the capital needs of all of our schools, not just a few,” he said.

Howard said there is a citizen’s group that helps to serve as a body for transparency on school projects. Each school board member has two appointees, and the committee meets quarterly.

He said that although SPLOST projects are already determined on the lists for each SPLOST, there is some money allocated for classroom space for urgent need.

Howard said, “There’s been a sentiment, in just talking to thousands of people over time, that South Cobb or Smyrna, we tend to get projects on the back end of a SPLOST project.”

Tre’Hutchins said, “And there’s no funding at that point.”

Howard said, “Right. So, from what I understand the district is very well aware of the urgency as far as space in this area, and I would be surprised if projects in our end were pushed to the back, because we have an architect already hired, especially for Campbell High School.”

He said the ball was rolling, and there are a lot of reasons to be excited, but the community needs to keep an eye on the projects.

The state and education

Newly elected District 40 State Representative Erick Allen was asked what Cobb residents should be aware of at the state level regarding education.

He said, “The biggest unkept secret is that we have a new governor. We’ve heard some guidance of where his mind is. I know in the last couple of years there’s been a lot of talk about rewriting QBE and moving forward. I think that conversation will always happen. I’m not sure it’s actually going to be addressed this year, but there have been commitments from governor-elect Kemp that he’s committed to still funding the QBE at 100 percent, which I think is going to be a reasonable expectation.”

“So, once again, until we really hear from the governor about what his true direction, his guidance is … the budget is released the fifth day of the session, I believe … once we get that, I think it will be an easier time to look through and see what the priorities really are,” he said.

“Unfortunately we’re in a situations where it’s political suicide to bring up senior exemptions among a lot of elected officials.”

“And I’m not afraid to say, ‘Hey, we should at least talk about it, and find out is this the best way, is there a better way?'”

I think it’s just wise to always have that mindset is there a better way.

Charisse Davis said, “The Cobb (state legislative) delegation is having those discussions. It is not under our purview, it is theirs. But when we put that number out there, it makes everybody perk up.”

Tony Waybright said, “When we have new developments being built specifically for seniors, and the average home value is starting at $400,000 and $500,000, those aren’t necessarily the grandpas and the grannys we’re trying to make sure we don’t tax out of their homes. And I think there’s a lot of sentiment that there are ways to do this, there are ways to tier the tax in so that people would have to live here for some period, the concept of paying some in before you get a freebie. So there are lots of different things we can do but we can’t ignore what we’re missing out on.”

“From a state level, I get it. When other counties look at us, and look at what we have as riches, and just say ‘How do you ask for more money from the state, when you’ve got it sitting in your own county?’ Waybright said.

Howard said, “We’re not going to figure everything out here, because we still have county commissioners, we have other governing bodies that have to kind of speak to one another and work together. On every single issue if we can collaborate more, listen more, I think we can kind of go in with good faith that we are coming into this because we truly want the best for our kids.” 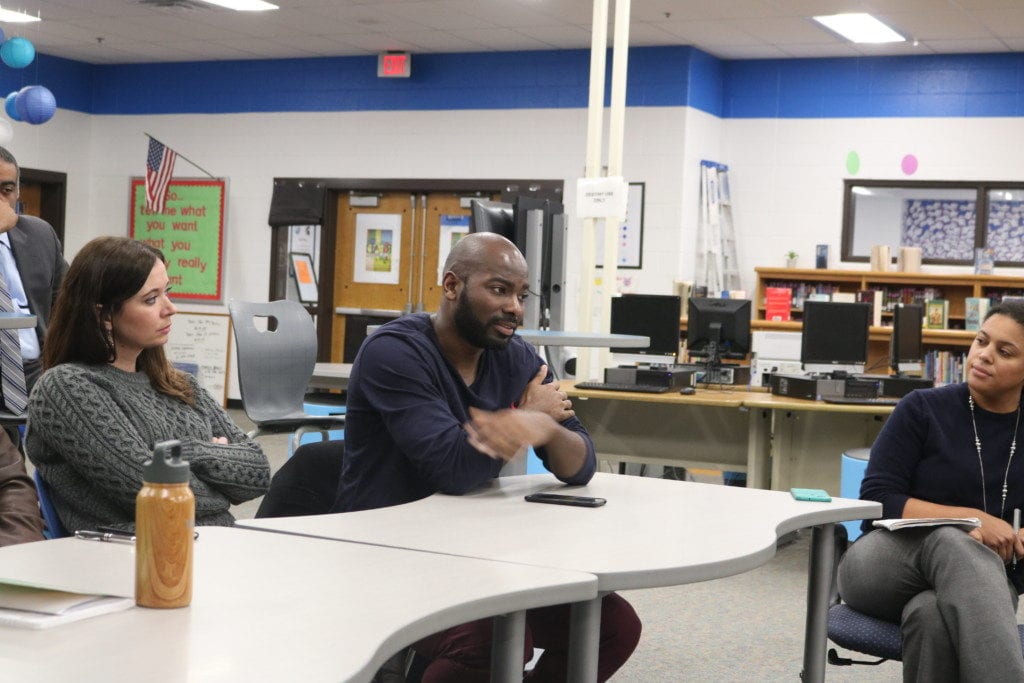 In her self-introduction at the beginning of the discussion, Jennifer Susko, a counselor at Mableton Elementary School, said, “I’m also glad that (State Representative Erick) Allen is here because I wanted to talk about the school counselor-to-student ratio, which is in Georgia about 500 to 1. I wanted to advocate for more of us if possible, because reaching 500 kids just by myself is difficult.”

Cindy Gerhardt, a past president of the Florida PTA, now living in Georgia and still active in the national PTA,  directed a question to Susko and John Nwosu, a counselor at Garrett Middle School.

Gerhardt said, “One of the first things you said when you were introducing yourself is about the lack of counselors, or that we have few. I mentioned about school safety, and and serving on the national school safety task force, and what has come to light is that there are many things that actually compound themselves and work together to cause a climate where a situation or a tragedy could happen. And one of those (that) was paramount is the mental health of our students. We were working with transient housing … students who are coming from unstable housing. As … counselors, do you have multiple roles, other than just counseling, such as test administration?”

Susko said, “The national recommendation is that we’re 80 percent direct services with students, and I’m so close to that. I’m in classrooms, I’m doing individual sessions, and I’m doing small groups. Every now and then I have to help out, as everybody does, in their jobs that are non-counseling duties. But it’s the best place that I’ve ever been in terms of how much I’m with my kids. That is not the case for every counselor. I know counselors who don’t go into classrooms at all, because they don’t have time to do it. They don’t have individual sessions often because their time is pulled for secretarial administrative duties that there’s not really a set person to do.

Gerhardt asked “So who identifies those at-risk students?”

Nwosu said “What ultimately happens I think a lot of time is it falls on administration, and it’s in a reactive capacity. ‘So now I know you’re at risk because I have to suspend you’.” And in my experience as well, my principal is super-supportive of our counseling program. This is my second year at the school, and she wants us to hit that 80/20 split. And I think the more we spend time together and the more we kind of work together, she gets a better understanding of exactly what it takes to get there. And that’s something we want countywide.”

“Just yesterday I had a student who posted on social media that they were thinking about completing suicide. And so the only reason I found that out was because I was visible in the hallways. I walked into a classroom and started having conversations with the students. One of them was looking sad. They didn’t want to tell me at first, but one of the other students who I had a relationship with told them it’s okay. We had a conversation, we did an investigation, the student is ok. He has a safety plan now, and he has support that otherwise (he wouldn’t have had), because this kid is super-quiet, the flies under the radar, slips under cracks. He does pretty okay in his classes, but in a crowd his voice will not be heard,” he said.

He said, “And so had I been pulled away to do something that was non-counseling related, and also had I not had the freedom to do my job in the way that works best for me, and works best for the culture of our school, then that wouldn’t have been possible.”