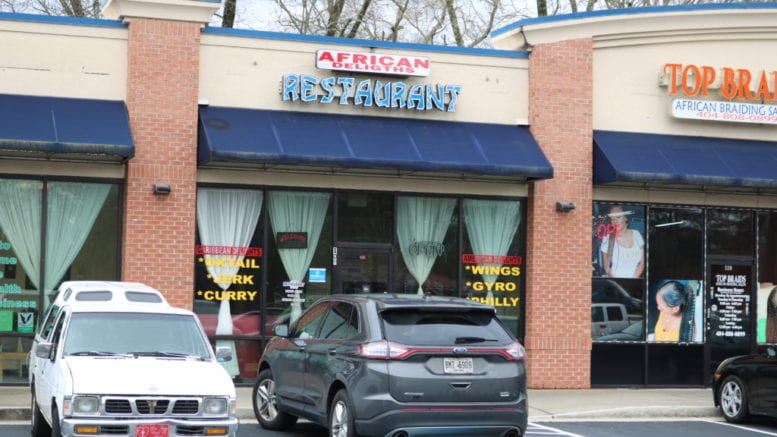 African Delights restaurant on Veterans Memorial Highway in Mableton, serves both African and Caribbean food.  The African dishes are from Senegal on Africa’s west coast.

The owner and chef at African Delights is Fatoumata Niang.

Niang’s husband, Metzo Niang, spoke with the Courier at the restaurant on Friday afternoon, described their menu, and talked about Senegalese food.

Niang said, “We try to blend authentic Senegalese menu and a little bit of Caribbean style because when we originally opened we had a lot of folks from the Caribbean.” He said the Caribbean customers requested jerk chicken, so they added the Caribbean choices.

The Senegalese diet consists mostly of carbohydrate and protein, he said. Traditional Senegalese diet includes a lot of vegetables, he said, but the diet has become more westernized recently.  Senegalese food is mostly rice and fish-based, he said.

There are cous cous dishes on the menu too, but the cous cous the restaurant serves is Moroccan-style wheat-based cous cous, he said.  In Senegal the form of cous cous eaten is called “chieree,” and is made by breaking up a form of millet.

“Basically the process is really long and drawn-out,” he said.  Occasionally the restaurant prepares chieree for Senegalese customers, he said, but it is very expensive to import, so the cous cous on the menu is Moroccan. “If you ever see (chieree), know that it only comes from one place, which is Senegal.”

Asked what he would suggest for restaurant patrons who had not yet tasted Senegalese food, he said, “I would tell them to try Dibi, if they are meat-eaters, because I’ve found that our food, for people who are not used to trying different food, can be a little heavy for them … and a lot of spice. So I would suggest that somebody who likes to eat meat … to get Dibi. And the reason is that the animal that you got it from is a very young animal, less than a year old, the meat is very tender and then you just grill it in some onion that anybody, pretty much most people on Earth can relate to.”

Dibi is described on the menu as “Grilled marinated lamb with sliced onion and mustard served with a choice of one side order.”

He said the process of cooking Jollof rice takes almost three hours, and that it uses a vegetable and fish broth.

Niang said that all the food is made to order.  “That’s why some people kind of complain that it takes a little longer. (We) say, ‘Well, this is not a fast food’.”

Asked about the cabbage served with the Caribbean choices on the menu, he said, “We eat a lot of cabbage, and in Senegal we call it choupame.”  He said the name is a Senegalized form of the French word for cabbage.

Other dishes he suggested that patrons try include the Cornish hen, the attieke, and suppa kandja.

He said the Cornish hen is free-range, and doesn’t have as much meat, but has a lot of flavor. “We tend to have a lot of repeat buyers that have that dish and always come back for that.”

“Now attieke did not come originally from Senegal. It’s from a plant called manioc, and originally came from the Ivory Coast, (prepared) with some tilapia, and a little bit of onion. Because in Senegal we started having a lot of immigrants from the Ivory Coast, we incorporated it into our culture of cooking food. It did not come from Senegal, but we almost now own it,” he said.

Describing the suppa kandja, he said, “It’s an original Senegalese dish, that people call fufu. In Senegal we call it suppa kandja. Because it’s okra based, but most people when they eat it they say ‘well, it’s just like a fufu’, but the consistency is a little different because we use okra, we use a cassava leaf, and there is no oil except palm oil.”

The menu describes suppa kandja as “Okra sauce with lamb, cow feet, and smoked fish in a palm oil with chopped okra, served over a white rice or $2 for fufu.”

[Correction: The original version of this article misidentified the owner of the restaurant.  We regret the error]