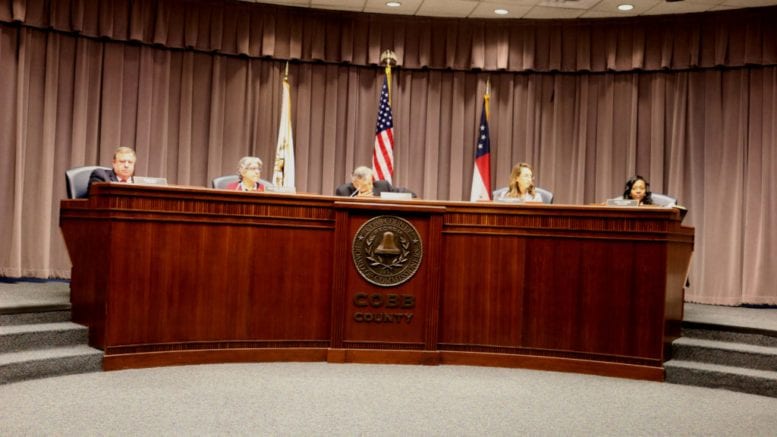 Concerns over the effects of a proposed driveway off Frey Lake Road caused the Cobb County Board of Commissioners to delay the decision on the request for a special land use permit (SLUP-13 2018) for a Kennesaw Jewish Center at KSU. The property is currently zoned R-20 (single-family residential). The BOC zoning hearing was held last Tuesday.

Moore displayed a map that showed that KSU owned the property adjacent to the center along Campus Loop Road, and that the preferred entrance would cut across a small parcel of KSU property in order to connect with the road, which is a private road also owned by KSU.

“However,” he said, “the day before your December Board of Commissioners meeting we received a letter from KSU. We had submitted and met with them about allowing this access at this location (Campus Loop Road) and immediately before your December meeting we received notification from KSU that they were not going to agree to that. They did not give us a good explanation at the time, but simply said they were not going to agree, which was why it was held (by the BOC) at that point in time and has been held again in February.”

He said, “We have not been able to reach that sit-down with them. If we could just sit down with them their objections could be easily addressed and satisfied, keeping in mind that only KSU can allow that access. It’s a public institution, a public entity, it’s not an access that the county can condemn even in this situation.”

Two officers from the Pinetree Civic Association, representing neighbors adjacent to the proposed center, were supportive of the project provided the entrance could be built on Campus Loop Road rather than Frey Lake Road.

Mike Lavender, the organization’s president, said, “We felt that it would be a great project considering the fact that they would be accessing the property from Campus Loop Road. Moving the access to Frey Lake Road we feel would create an additional safety hazard.”

“We had a traffic study done. There’s somewhere between five and six thousand cars go through that section every week, and we just feel that it would not be safe,” he said.

BOC chairman Mike Boyce said his understanding is that the civic association supports the project, except for the plan that places the driveway on Frey Lake Road.

Lavender said, “Yeah. If it’s on Campus Loop Road we didn’t have any issues with the project at all.”

Phil Anzalone, the vice president of the civic association said, “Pinetree Civic represents about 600 homes in the Pinetree Country Club/Wetherbyrne Woods area. It’s directly west of KSU. As Mike has said, we are fully supportive of this facility. By moving the driveway onto Frey Lake Road (we’d be) creating a major, dangerous intersection. To give you an idea of what the main problem here is, Campus Loop Road has an excessive amount of traffic. It was originally a Cobb County road, it’s two-lane. KSU over the years has basically built facilities along the road.”

He showed a slide with a map of a multilevel parking deck and a pair of surface parking lots. He said the majority of the traffic headed to that location from the northwest comes down Frey Lake Road.

“So we have a residential road that supports traffic way beyond its original designation,” he said.

He showed the original site plan, which he said shielded the surrounding residential neighborhood. Then he showed a photo of a hill looking onto the property from Frey Lake Road

“As you can see, there’s a significant height of topography there, that blocks the view,” he said,

Commissioner JoAnn Birrell, who represents the district where the property is located, said she had received an email from the VP of External Affairs at KSU, and later spoke with him about possible revisions to the plans.  She said Moore, representing the applicant, had agreed to submit revised drawings.

“Without KSU granting us an easement for this property we may have to access on Frey Lake, but for safety reasons, and congestion and traffic and impact on Pinetree and Wetherbyrne Woods, and other neighbors, we all prefer Campus Loop. So we’re dependent on KSU giving us an easement,” she said.

Birrell called Ashley White, an engineer from the Cobb County DOT to the podium to talk about the traffic and safety implications of the site plans.

White said, “Our preference would also be for the entrance to be on Campus Loop … The issue with the entrance on Frey Lake is sight distance, as you guys saw from the pictures.”

Birrell said her understanding is that KSU’s objection is that they have future plans for the property.  She said her preference is that the driveway be at the remnant property on the very corner of Frey Lake and Campus Loop, which would create less impact on KSU property.

Birrell made a motion to hold the decision until the next BOC zoning hearing with the intention of meeting with KSU to obtain an easement.  The motion passed 5-0.

Kennesaw State University did not respond to requests for comment as of the deadline for this article.

KSU and eight other COVID-19 test sites shut down