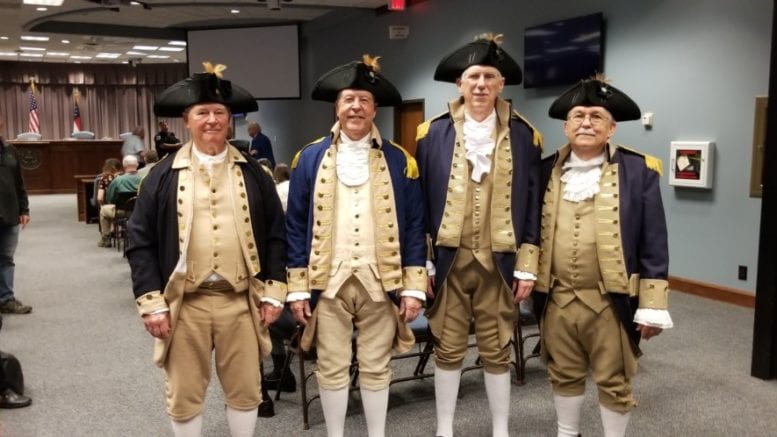 Stallings Howell, Bill Floyd, Wayne Brown and Shep Hammack from the Sons of the American Revolution at the Cobb Board of Commissioners meeting to receive a proclamation for Patriots Day (photo by Larry Felton Johnson)

Cobb Commissioner JoAnn Birrell presented a proclamation to members of the Sons of the American Revolution declaring April 19, 2019, as Patriots Day. 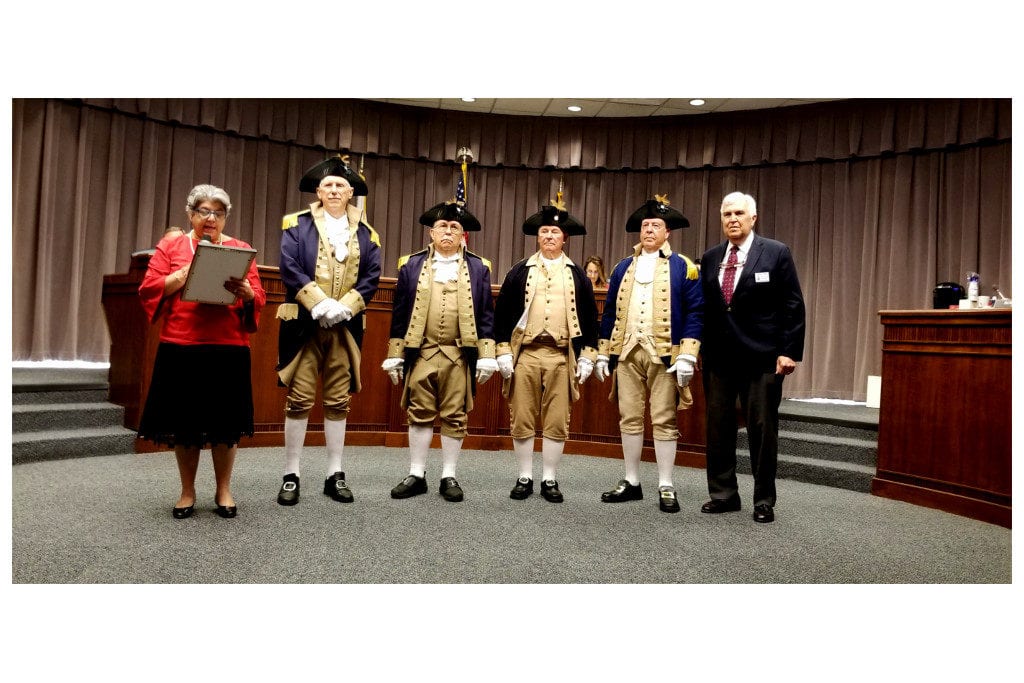 WHEREAS:
April 19th marks the date in 1775 when the towns of Lexingtonvand Concord, Massachusetts were marched upon by the British regulars in an effort to confiscate munitions of the local militia; and
WHEREAS:
The resulting “shot heard round the world” and the rout of the
Redcoats are now celebrated as Patriots Day; and
WHEREAS:
On April 19, 1778, Colonel Samuel Elbert, commanding three Georgia Navy galleys, Lee, Washington and Bulloch, encountered three British ships in the Frederica River near St. Simons Island; and
WHEREAS:
After five hours of naval action, the British ships were captured by Colonel Elbert and the Georgia Navy, a victory which boosted the morale of all Georgia patriots and caused the British to delay their invasion of Georgia by more than eight months; and
WHEREAS:
Patriots Day serves to remind citizens of our Revolution and the sacrifices endured during the years of struggle by patriots such as Captain John Collins for American independence; and
WHEREAS:
The descendants of the soldiers who fought in the American Revolution encourage the community to proclaim April 19th of each year a Patriots Day in commemoration of the American Revolution and the struggle for independence; now
THEREFORE:
We the Cobb County Board of Commissioners do hereby proclaim April 19, 2019 as PATRIOTS DAY and urge all Cobb County residents to become more knowledgeable of the
role which the Revolutionary War played in the history of our County and our Country.
This, the 9th day of April, 2019.
Advertisement
Advertisement
SHARE
TWEET
PIN
SHARE

Cobb commissioners reach consensus on how to procede on park bonds