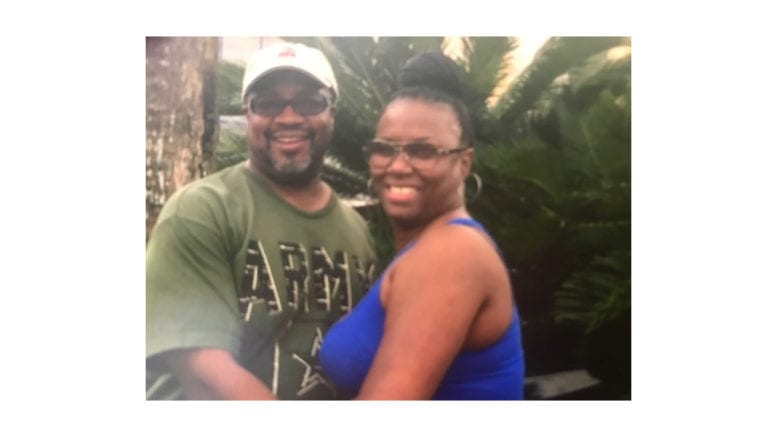 Anthony and Cynthia Welch, the victims of the robbery and murder at Pappadeaux. (photo courtesy of the Cobb DA's office)

Two Florida men were convicted in the armed robbery of a couple that resulted in the murder of the husband and the shooting of the wife.

According to a press release from the office of Cobb Acting District Attorney John Melvin, Demarious Kevauh Greene, now 23, and Dylan Marquis Ledbetter, now 25, both of Broward County Florida, were convicted of murder and other charges related to the attack on Anthony and Cynthia Welch.

The incident occurred on October 7, 2016, after the victims, a Kennesaw couple,had been celebrating Cynthia Welch’s birthday at Pappadeaux restaurant.

The press release describes the details of the crime as follows:

As they were returning to their vehicle, they were accosted by Greene and Ledbetter. Anthony, 48, stepped in front of his wife to protect her and was shot in the heart with a bullet from a .380 caliber handgun. He died a short time later. Cynthia was also shot once with the same gun, with a bullet entering through her arm and stopping on the side of her chest. As Cynthia lay on the ground, one assailant pulled a necklace from her neck before the attackers fled in a vehicle. Fortunately, she survived. Cobb Police reviewed security video from the restaurant and began trying to identify the getaway vehicle by its taillights.

Police investigators notice similarities between the robbery and murder at Pappadeaux and a similar parking lot robbery four days later at the Outlet Shoppes at Atlanta, in Woodstock.

Cobb and Woodstock police believed the incidents could be related, and the video images of the Woodstock robbery were captured in daytime, with clearer images of the attackers and their vehicle.

The vehicle had Florida tags, and the police issued a BOLO. The vehicle was spotted on October 15 at a Red Roof Inn in Marietta, about a half mile from Pappadeaux.

When the vehicle left the motel, Cobb police initiated a traffic stop. Ledbetter, the driver, pulled over as if to stop in a Shell gas station, but attempted to flee, hitting a Cobb police officer, striking another vehicle, and jumping a curb, which caused the airbag to deploy.

Greene ran to a nearby motel, while Ledbetter ran toward a plainclothes officer who then shot Ledbetter three times.

A third man remained in the car with his hands raised.

Police found a chain belonging to the Woodstock robbery victim, and a .380 Kel-Tec pistol that had been reported stolen in Broward County Florida.

GBI ballistics experts matched the gun with bullets taken from the victims of the Pappadeaux shootings.

“This murder was cold-blooded. Senseless. It didn’t have to happen,” Chief Assistant District Attorney Jesse Evans said in his closing arguments to the jurors. “Cynthia and Anthony Welch did not deserve this.”

This morning the jurors delivered a guilty verdict for both defendants for malice murder, felony murder, aggravated assault, armed robbery, and firearms charges. Ledbetter was also convicted of aggravated assault for striking the police officer with the vehicle while trying to flee.

Cobb Superior Court Judge Ann Harris will hand down the sentence at 2:30 p.m. on May 30. The two men face the possibility of life without parole,

Both men have already been convicted in the Woodstock robbery and were sentenced to life in prison.

Convicted Marietta meth trafficker will get at least 25 years

Arrest made in homicide on Cobb Parkway