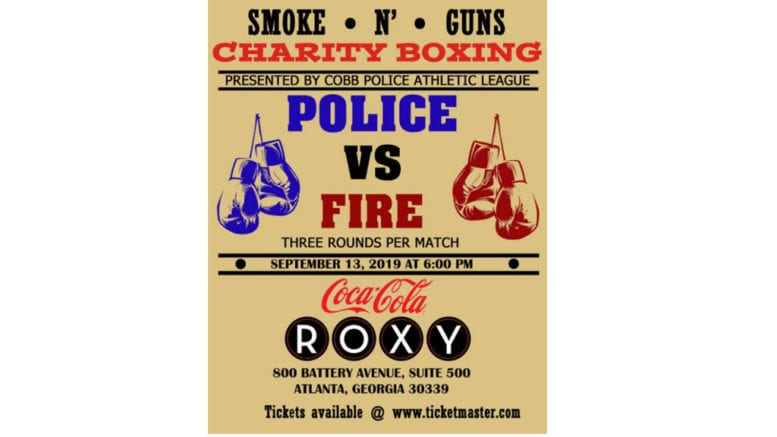 Cobb Public Safety Director Mike Register and GBI chief Vic Reynolds are going to square off in an exhibition boxing match as part of a charity boxing event to benefit the Cobb Police Athletic League (PAL).

The event, called “Smoke N Guns” because of the matches between the Cobb police and fire departments will be held at the Coca-Cola Roxy at The Battery (near SunTrust Park) on September 13, 2019 at 6 p.m.

According to the press release from Sgt Wayne Delk of the Cobb County Police Department, “This entertaining, action-packed evening will feature Cobb County Police Officers and Firefighters as well as law enforcement officers and other first responders from surrounding areas. There are nearly 20 bouts planned and the event will be sanctioned by the USA Boxing Association.”

The Police Athletic League is a youth service organization known for its boxing program and other athletic activities for young people.

Cobb PAL “annually serves over 500 youth in communities throughout Cobb County in programs ranging from track and field to martial arts to mentoring and all manner of athletics in between. Cobb PAL’s mission is to make a positive difference in the lives of young people through recreation, mentoring, and athletics,” according to the Cobb County Police Department.

Doors for “Smoke N Guns” open at 6 p.m. and the bouts are scheduled to start at 7. Tickets are $23 each. 100% of the profits from this event will go to support the youth who participate in the amazing programs of Cobb PAL.