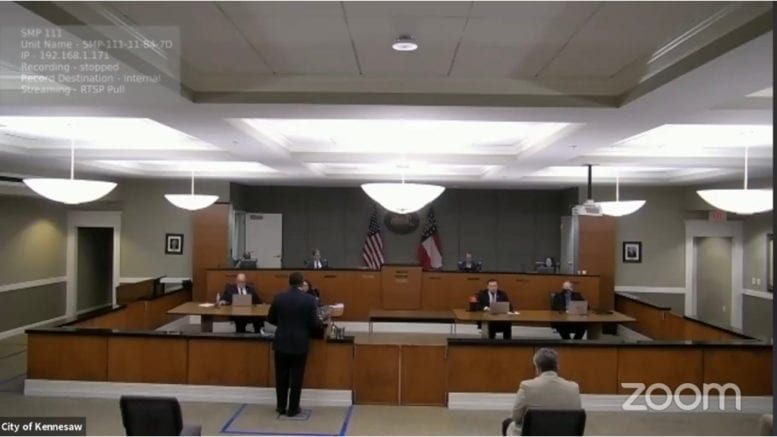 Developers for two Kennesaw properties, both which have generated concerns from the public, have been granted hearing postponements until December.

The first is the 3.35-acre property at 1520 Old Highway 41, which was rezoned from commercial to multi-family residential senior living in 2015. Developer Walton Communities has now requested amendments to three variances that were also approved in 2015 as compromises between the council and the developer. Walton Communities requested the ability to build up to four stories with a density increase up to 93 units, and council agreed to an increase from two stories to a maximum of three stories and 75 units. The new application again requests four stories and an increase to 82 units. Additionally, they are requesting a change from one parking tree island every six parking spaces to one every 15 spaces.

“The applicant recognizes that the city did receive some opposition and concern from the neighbors, and they want to take additional time to prepare their case and to meet and get more information from the surrounding neighbors so they can be more prepared to present both the rezoning and the variance applications in December,” said Zoning Administrator Darryl Simmons.

Also postponed is the application to rezone seven acres at 1320 Lockhart Dr. from office and light industrial to purpose built student housing, a new designation that was just added to the housing code earlier this year. Developer York Acquisitions is also requesting variances to increase density from 352 beds to 424, and a waiver of the requirement to access the property from a major collector or arterial street.

According to Simmons, residents raised traffic questions at a community meeting and developers need time to review a revised traffic study. During the Nov. 4 planning commission meeting, Chairman Doug Rhodes and member Don Bergwall expressed concerns about granting the variance requests on the heels of the research that went into creating the new student housing ordinance.

Both matters will return to the planning commission Dec. 2 and the Kennesaw City Council Dec. 21. Council meetings are held at 2529 J.O. Stephenson Ave. at the City Hall in Council Chambers on Mondays at 6:30 p.m.

The meetings are also available to be viewed on the City of Kennesaw Government Facebook page.