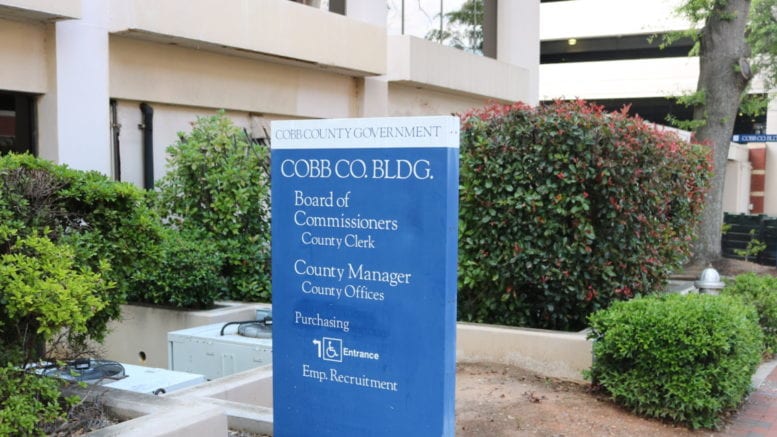 The Cobb County Planning Commission recommended that the Cobb County Board of Commissioners approve a rezoning request that would allow St. Benedict’s Episcopal School to build classrooms for fifth to eighth-graders on a 4.2-acre lot near the existing campus.

The current zoning is a mix of R-20 (single-family residential) and OI (office and institutional). The applicant requested that the property be rezoned OI.

The property is located on the east and north side of Daniel Street, on the west side of Cooper Lake Road. Both those are near Atlanta Road.

The applicant was represented at the hearing by attorney Kevin Moore.

Moore said that there are already 180 fifth to eighth-grade students at the existing 7-acre location on Cooper Lake Road.

He said the newest revised site plan reduces the proposal from several buildings to a single building and reduces the maximum number of students from 350 to 240 in an effort to mitigate traffic during the drop-off and pick-up hours for students.

After presenting, Moore yielded his remaining time to Cody Owenby of A&R Engineering, who had conducted a traffic study that was presented to the Planning Commission and Cobb DOT just before the meeting.

He apologized for getting the traffic study to the Cobb DOT so close to the meeting.

“So we know they have not had a chance to complete their review of it,” Owenby said. “So as a result, I’m going to kind of walk through kind of what some of the final summaries are that we analyzed in the study.”

“We did study the surrounding networks including Atlanta road at Daniel St., Cooper Lake Road at Daniel Street, as well and a couple of other intersections,” he said. “Subject to some improvements, they will not be substantially impacted and the school can work at this location.”

“Specifically our recommendation is to make the north driveway entrance-only and then the south driveway will be an exit-only driveway with provisions for emergency vehicle access,” Owenby said.

A major point of contention between St. Benedict’s and the neighbors in the adjacent Kensington Green subdivision was traffic flow during peak hours.

Attorney Brian Daughdrill of Giacoma, Daughdrill & Roberts represented the Kensington Green Homeowners Association, who were opposed to the rezoning.

“Even if they restrict the school to 250 students, even if they’re moving (the entrance) up the road from where it is right now they’re talking about an increase of at least 70 students,” he said. “And the most conservative information from the ITE trip generation manual is that at middle school, each one of those students triggers one vehicle trip in the morning and out one vehicle trip in and out in the afternoon.”

“The intersection that they’re talking about on Atlanta Road already has a failing rating at afternoon peak hour,” he said.

“Another issue that we have with this project is that as it’s presently designed, it’s mostly pervious surface (and) drains toward Kensington Green,” he said. “And there’s already been comments by staff about the fact that stormwater runoff could be an issue.”

District 2 Planning Commissioner David Anderson, who is the commissioner representing the area of the property, questioned the applicant and the staff about traffic, noise mitigation, and stormwater management.

He asked Amy Diaz, a Cobb DOT senior traffic engineer whether at a traffic light at Cooper Lake Road and Daniel Drive was feasible.

She said the issue with that is the driveway is very close to the intersection, and without reworking the intersection into another geometric shape it would not be feasible, and doing that would be outside the scope of the request.

Anderson called Carl Carver from Stormwater Management to the podium and questioned him about what changes would need to be made to manage runoff.

Carver said that storm drains would need to be installed and that would require coordination between Stormwater Management and Cobb DOT during site plan review.

Anderson then made motions recommending approval of Z-78 and SLUP-11, the two requests related to the project, subject to his list of stipulations, many of them related to traffic management during peak hours.