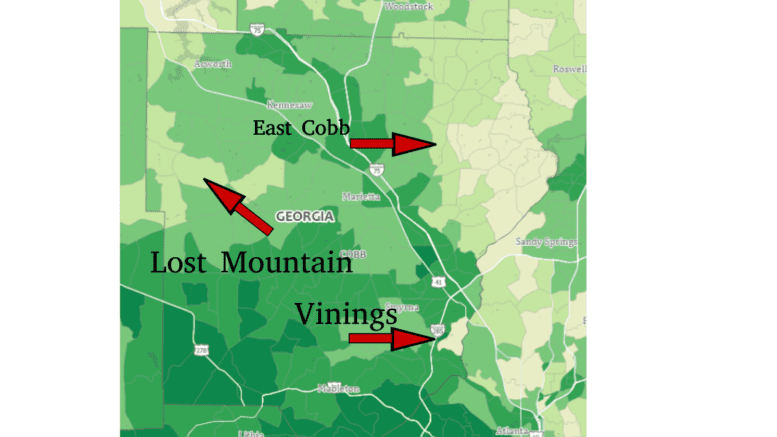 It is about race. Specifically, the proposed cities of East Cobb and Vinings have carved out the census tracts with the lowest Black population in the county when drawing their boundaries.

The only census tract with a Black population of lower than 5 percent Black that East Cobb or Vinings did not divvy up was tract 303.43, just north of Shallowford Road bordering Fulton County.

For comparison, the percentage of Cobb’s population identifying as “Black alone” in the latest census is 28.8 percent.

To demonstrate the point, here’s a screenshot from the 2020 Census Demographic Data Map Viewer with the Black or African American tab selected. Arrows were added to label the locations of the proposed cities of East Cobb, Lost Mountain and Vinings.

To put this in the starkest relief, look at this detail from 2020 Census Demographic Data Map Viewer of the boundary on the western edge of the proposed City of East Cobb, along Old Canton and Murdock Roads.

The aspiring city also picked up a section on the very northernmost tip of their map, below where Davis Road and Shallowford Road intersect, a portion of census tract 303.27, with a seven percent Black population.

Vinings is easier to visualize. They kept the city limits relatively small, dominated by census tract 312.12 with a Black population of 2.7 percent, and expanded just enough to take in adjacent commercial and industrial areas.

The proposed City of Mableton has the highest percentage of census tracts with a significant percentage of Black residents, with the tracts along I-20 all higher than 75 percent of the population identifying as “Black or African American alone.”

Lost Mountain has census tracts that are more comparable to countywide averages but the census tracts forming the core of the proposed city have a less than 10 percent Black population.