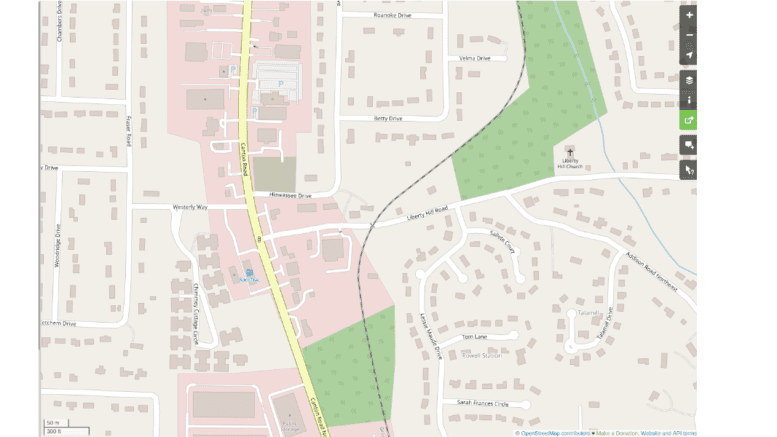 At the meeting of the Cobb County Planning Commission, the commission recommended that the Cobb County Board of Commissioners approve a request for rezoning that will allow a retail specialty contractor to operate on a property on Liberty Hill Road until the company’s lease expires at the end of January, 2023.

The applicant is PropCo Liberty, LLC, and the request was to rezone from GC (general commercial) to NRC (Neighborhood Retail Center). The property is located on the south side of Liberty Hill Road east of Canton Road.

“This property, as you can see, is being proposed for rezoning from this existing general commercial or GC category to NRC,” he said. “The property finds itself in one of those situations that you see, some others may not be as familiar with, because it gets kind of inside baseball type of talk for zoning, in that it is zoned general commercial, the property that was in a Neighborhood Activity Center on the future land use plan.”

“So this property was built according to the GC standards at the time in the early 70s,” Moore said.

He said there are two buildings on the site, a large one and a small one. The landscaping contractor is in the smaller building, and a furniture store will be occupying the larger, showroom-style building.

He said the applicant had agreed to a number of improvements stipulated by the neighborhood residents.

“I want to take the opportunity to thank Mr. Moore and his client for working with us, and his stipulation letter very closely mirrors that of our own,” she said.

“We would respectfully ask that you recommend approval of this,” Brown said. “There are some minor things that could probably be cleared up.”

“But there’s one major thing,” she said. “And this is more in the nature of a clerk’s note.”

She showed a photograph of the road.

“Staff notes that there are about 1700 vehicle trips daily on this narrow 25 mile per hour road, which once you cross the tracks, it’s residential in nature entirely,” she said. “There’s a small community near it, and there are people who actually walk up to Canton Road and cross the street to go to the new Racetrac for coffee and whatnot. And not very many people observe the 25 mile per hour speed limit.”

She requested that sidewalks be installed along the roadway to ensure safety.

“We don’t really care who pays to build the sidewalks, and would ask that maybe if within a year or so there aren’t already any provisions to trigger the applicants constructing sidewalks, we would really like for this to be put on the SPLOST list,” she said.

“You simply can’t walk safely in this area,” Brown said.

Deborah Dance, who represents District 3, where the property is located, made a motion to recommend approval, and it passed 5-0.

About the Planning Commission

The Planning Commission hearings and recommendations have some of the highest impacts on quality of life in the county of any public body.

Their job is to make recommendations on rezoning requests, special land use request, and other business, and to send those recommendations to the Cobb County Board of Commissioners, who make the final decision.

The Planning Commission is described on the Cobb County website as follows:

Established as an advisory Commission to assist the governing authority (BOC) in the administration and enforcement of the Zoning and Planning Act and to prescribe the duties and functions of such commission.

The full duties and functions of this Commission are contained in the Cobb County Zoning Ordinance, Section 3-28-9 134-61.