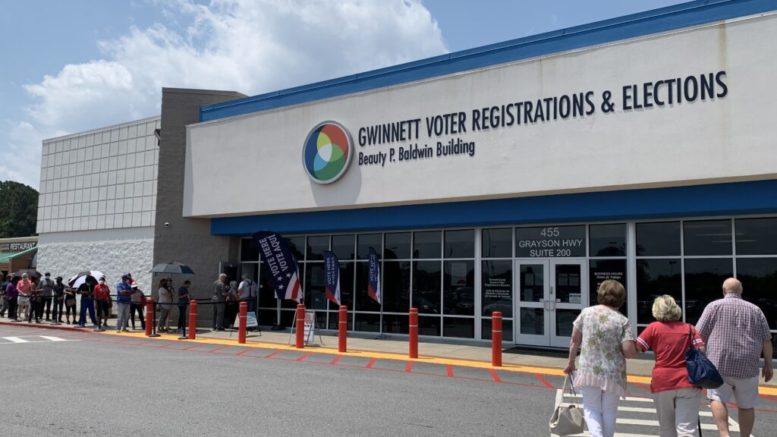 According to the 2020 U.S. Census, Georgia’s Latino population surpassed 1 million, with close to 190,000 Hispanic residents living in Gwinnett County. The growing voting bloc gives greater influence on the outcome of elections like the Nov. 8 midterms. Jill Nolin/Georgia Recorder

When Raysa Aragon immigrated to the United States at the age of 38, living under the tyrannical regime of Cuban dictator Fidel Castro was more than enough to deter her from blindly joining a political party.

For the next several decades, the 66-year-old retired interpreter and Clayton County resident voted for the candidates she thought were most suitable for office, but she was more ideologically aligned with ideals of independence and smaller government typically associated with Republicans.

This week, when Aragon voted in the midterm elections, her bitter dissatisfaction with former Republican President Donald Trump prompted her to vote for a Democratic candidate for governor, U.S. Senate, secretary of state, lieutenant governor and attorney general.

During Trump’s term in office, Aragon was turned off by his actions and subsequent false claims of a stolen 2020 presidential election. This week, she voted for candidates in Georgia who promise to promote better medical care, education, and abortion rights.

“America is in a civil war with our civil rights being crushed,” Aragon said. “Our individual rights are taken away. This is a war and you have to vote for a party who’s against that.”

Aragon is one of 309 self-identified Hispanic and Latino likely voters who expressed their preferences on candidates and issues. Georgia’s Hispanic population is the fastest growing demographic and now accounts for a little less than 5% of registered voters.

The text-to-web survey was conducted in English by the University of Georgia’s School of Public and International Affairs Survey Research Center and commissioned by several newsrooms as part of the Georgia News Collaborative.

The survey results reveal that the races for U.S. Senate, governor, secretary of state and attorney general are too close to call right now among Hispanic voters. It differs in some significant ways with the coalition’s poll of a larger pool of likely Georgia voters conducted in late September and early October that sampled the overall population.

Hispanic voters are more likely to crossover than other demographics. It is more likely that women will vote for Democratic candidates and that their vote will be swayed by abortion rights issues than Hispanic men.

The poll surveyed contains a margin of error of 5.6 points.

The respondents slightly favored the Republican candidates for secretary of state and attorney general while in the race for lieutenant governor, Republican Sen. Burt Jones holds an 11% advantage among Hispanic voters over Democratic challenger and former prosecutor Charlie Bailey.

Additionally, the poll revealed that Republican candidates like Kemp and Raffensperger have more support from likely Hispanic voters who are Democrats.

The survey also covered the reaction to the Supreme Court overturning Roe v. Wade and the 2019 law passed by Georgia Republican legislators that would ban most abortions after fetal cardiac activity is detected, potentially as early as six weeks into pregnancy and before many women know they are pregnant.

Women, at 65 percent, said they wanted to elect candidates who pledged to protect abortion compared to 38 percent of Hispanic men.

The rising prices for gas and food were having a significant impact on 63% of respondents, but only 18% of liberal respondents said it reached that level of pain and 59% said it was noticeable.

Gilda Pedraza, executive director of Latino Community Fund, said getting more poll results about Hispanic and Latino voters is positive. Overall, the results demonstrate that no political party should take Hispanic voters for granted and should be willing to engage in what they desire, Pedraza said.

“I think they are very smart and they vote for whatever platform or candidate that speaks to their needs with the hope that change will elevate their daily lives,” Pedraza said.

Since the poll is only for likely voters, it doesn’t represent a large segment of the Hispanic community that is undocumented or the voter rolls used from two years ago don’t reflect the population growth like the Puerto Rican evacuees after Hurricane Maria.

Also, more voters might have responded if the poll was also available in Spanish and not only through text to web.

Bookman: How much is too much for Herschel Walker’s ‘family-values’ voters?

Voting rights advocates, Democrats urge voters to cast a ballot early and avoid mailing it in