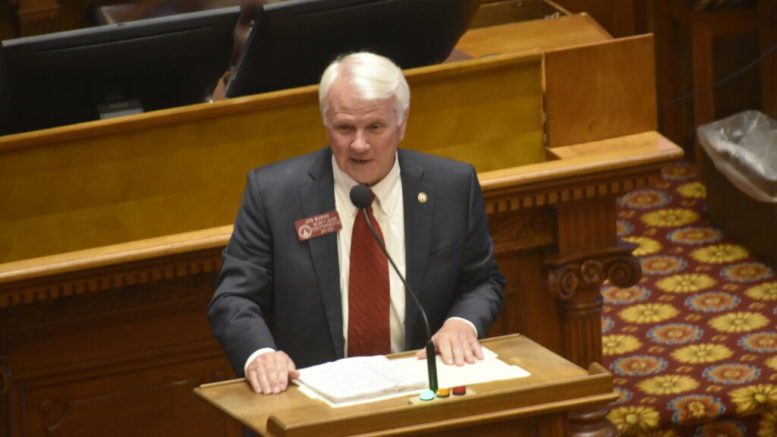 The House GOP caucus nominated Jon Burns as the next speaker, teeing him up for an official vote by the full chamber in January. Ross Williams/Georgia Recorder

House Republicans tapped majority leader Jon Burns to lead the chamber Monday, elevating Burns to one of the most powerful roles in state government.

Burns beat out a more polarizing candidate, state Rep. Barry Fleming, who is best known as the author of last year’s controversial election overhaul. The full chamber is set to vote on Burns’ nomination on the first day of the legislative session in January.

The Newington Republican, who is an attorney and farmer in Effingham County, ascends to the top of the chamber after current House Speaker David Ralston announced just days before the midterm election that he would not run again for speaker because of a “health challenge.” Ralston was not present Monday.

Burns, who has been majority leader since 2015, pitched his speakership as a way to stay the course on the heels of a midterm election that left Republicans in control of every aspect of state government. He was elected by secret ballot Monday.

“While the circumstances may not be of our choosing, we now have to chart a way to keep Georgia moving forward together,” Burns said to his colleagues. “If I am nominated as your speaker, it will be because you trust me to keep building off of our success, keep our caucus united and keep our state moving forward.”

Fleming, who has long been seen as a rival to Ralston, offered himself as a leader who would pursue more aggressive initiatives to address crime and a “renewed focus” on failing K-12 schools. But the Harlem Republican also said he wanted more caucus input in setting the House GOP agenda.

Ralston, a Blue Ridge Republican who has been speaker since 2010, was often thought of as the steady hand in state government who was largely respected on both sides of the aisle.

His departure from the speaker’s rostrum means there will be new leadership at the top of both legislative chambers when lawmakers return next year. State Sen. Burt Jones was elected lieutenant governor last week.

Burns’ tenure as speaker will begin as Republican lawmakers in the House watch their majority continue to slowly shrink. After last Tuesday’s election, the partisan split in the chamber is 101-79 after House Democrats netted two seats in the wake of redistricting. A bill needs 91 votes to clear the House, which has 180 members.

That dwindling majority was on the mind of GOP lawmakers as they deliberated on who could best keep the House in Republican hands into the future. State lawmakers will be back on the ballot in 2024, nearly two decades after Democrats lost the House.

“We have to start immediately ensuring that we raise the funds, recruit the candidates and do what’s necessary to be competitive in two years,” said state Rep. Chuck Efstration, a Dacula Republican who was just elected the new House majority leader.

Efstration, who is an attorney and who chairs the judiciary committee, called for maintaining “respectful decorum within this chamber.” Notably, Efstration co-sponsored a bipartisan hate crimes law in 2020. He beat out three other candidates for the role.

“In modern politics, the divisive nature of our times often has little to do with the debate, but folks are trying to interfere with the process. That’s unacceptable,” he said.

Speaker Pro-Tempore Jan Jones, who stepped out of the way to clear the path for Burns to become speaker, ran unopposed for another term as the second in command of the chamber.

House Democrats will meet next week to elect their leadership.

In a midterm that was gentler on national Democrats than forecasted, Georgia Democrats came up short in wresting control of state government away from Republicans. But House Democrats did pick up three seats while losing one held by Roswell Democrat Rep. Mary Robichaux.

“Going into January, Georgia House Democrats are in a stronger position than ever to fight on behalf of all Georgians under the Gold Dome,” House Minority Leader James Beverly, a Macon Democrat, said in a statement.