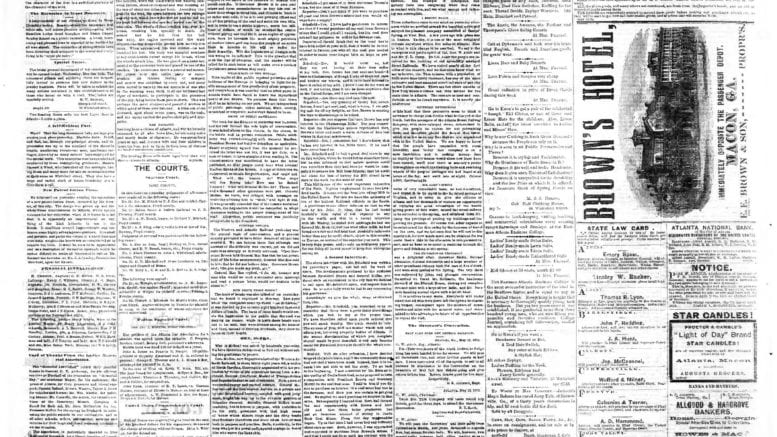 There is a guideline in journalism: “Don’t bury the lede.”  A lede, sometimes spelled “lead”,  is the opening of a news story.  It’s the part that gets you interested in reading further.  Burying the lede is opening with details that don’t grab your interest, and leaving the real point of the story for later.  I found a good example of burying the lede in a set of companion articles in an old Atlanta newspaper.

I’ve been researching a 19th Century Atlanta community called Iceville, located on the Chattahoochee River where the neighborhood of Bolton is located now.  Iceville was named for the Atlanta Ice Company, which made ice from Chattahoochee water.  The grounds of the company was a major picnic destination in the 1870s.  It was within walking distance of the passenger rail terminal, and featured dancing, fishing, and tours of the ice company.

“Picnic of the Hibernian Society At Iceville

At half past eight o’clock yesterday morning, the Irish element of Atlanta’s population with many others got aboard the train and “Ho! for Iceville!” was the watchword. It was a beautiful morning — the girls looked charming as they always do — the young men had on clean shirts and were newly shaved, and the old ones were not much behind in the matter of dress …”

The story goes on to describe the efficiency of the organizers, some of the prominent attendees, and continues,

“Meantime, those who did not dance sought suitable trysting places, and doubtless the ‘old, old, story’ was told many times during the day.  The beautiful Chattahoochee, rolling in full view, attracted much of the attention of lovers of nature,  while the curious took occasion to inspect the ice works.”

The next paragraphs went on to describe the dancing, a fistfight, and regrets over the absence of two prominent members of the Hibernian Society.

The story closed with:

“Just after six o’clock the whistle blew, and the party, sated with rural pleasures, started for Atlanta in high spirits, but the gaiety was unfortunately all forgotten when the sad accident described in another column occurred. Otherwise the whole was such a scene as only the jolly, fun-loving Irish could set up.”

The “sad accident” was recounted under the next headline: “One of the Party Run Over and Killed by the Train.”

To be fair to the Atlanta Daily Herald, newspapers had different standards in the 19th Century.  But even then, making the transition between the two stories must have been jarring for readers.

You can read both stories, including the tragic event that any modern newspaper would have pushed to the forefront, here.