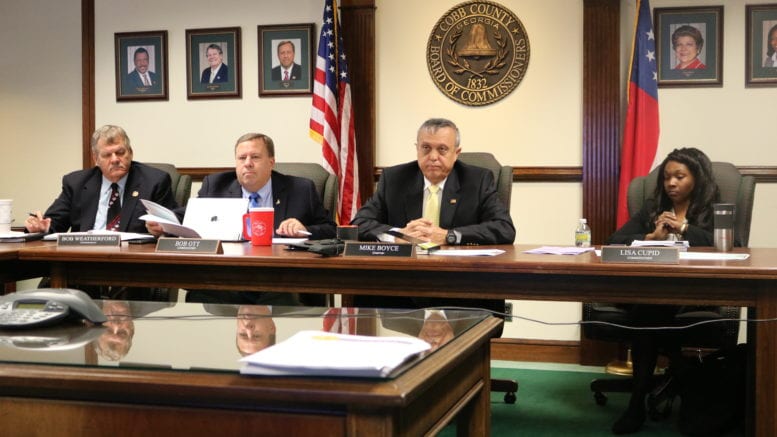 In a special work session Wednesday the Cobb County Board of Commissioners reached a general consensus on how to proceed with bonds for the acquisition of land by the county for public parks.  The consensus was that the county will move forward by issuing bonds up to a total of $24,700,000, which is the maximum possible under the remaining schedule of the existing bond resolution.  The decision will be discussed and voted on at next week’s board of commissioner’s meeting.

The estimate is that this plan will add 0.13 mills to the annual millage rate, to service the debt.  The possibility was left open for a future bond resolution to restore the available funds to the original $40 million approved by the commissioners and by public referendum in 2008.

Commissioner Bob Ott raised a concern that the process not be rushed, and Commissioner Lisa Cupid said she was still evaluating land in her district.  Using the remainder of the existing schedule, rather than starting over with a new resolution and referendum, will ensure that when negotiation for land starts, the county will have the money available when agreements are reached with landowners.

$40 million in bonds had been approved by the board of commissioners, and by the public in a 2008 referendum.  The Board of Commissioners had decided not to proceed on the original schedule due to the recession and the drop in property values between 2009 and 2010.  Because the bond resolution created a schedule for how much could be issued per year, the amount of available money has dropped between 2009 and the present.

He said the conversation has to be driven by what the county can legally do based on the terms of the 2008 bond referendum.

Roberta Cook, the Executive Director of the River Line Historic Area, is a long-time advocate for implementing the plan for creation of parks laid out by the original bond referendum.  She was present at the work session, and had this to say after the meeting.

I like that they’re moving forward with the funding, and that certainly is reassuring that things are going to be happening.  And I think they’ve got a genuine interest in getting us up to the the $40 million somehow. But it sounds like it’s still not definite how we’re going to get the remaining funds. But at least they’re moving forward, and that’s to their credit, so I’m liking that.  And I like the attitude.