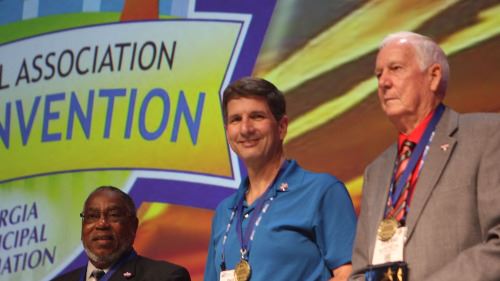 The training institute is a joint project of the GMA and the University of Georgia’s Carl Vinson Institute of Government. It provides education for city officials in a number of areas, including open records requirements and laws pertaining to municipalities.

Goldstein was first elected to the city council in 1980 when he was 21 and is the longest-serving current council member.  He is a businessman, practicing attorney, and a former prosecutor.

Asked about the purpose of the training, Goldstein told the Cobb County Courier, “The training is one way to learn new things and to expand ones knowledge.  No matter how long you may have been in government, or whether you’re new to government, there’s always something new to learn.” He said he has taken more than 330 hours of courses over a 37 year period.

[CORRECTION: An earlier version of this article stated that Goldstein was elected at 25 years of age, and had taken courses over a 25 year period. Thanks to council member Goldstein for pointing out the error.]

According to the press release from the GMA,

The Certificate of Dedication requires 276 hours of training, including at least 108 hours from a required list of classes, 18 hours of which must be from a new Advanced Leadership track, and the Robert E. Knox, Jr. Municipal Leadership Institute. After obtaining the Certificate of Dedication, officials must complete nine hours of continuing education each year to maintain the certificate. The training program consists of a series of more than 60 courses.

Ten city officials received the Certificate of Dedication at this year’s GMA convention.

“This is outstanding achievement truly speaks to the dedication shown by these recipients,” said GMA Executive Director Lamar Norton. “As one of the inaugural recipients of the Certificate of Dedication, we commend Councilmember Goldstein for this accomplishment and for the commitment he’s shown in using this valuable resource to become a more effective city official. Councilmember Goldstein serves as an example to other city officials across the state.”

Stacy Jones, interim director of the UGA’s Carl Vinson Institute of Government said, “The dedication shown by these ten public servants from across the state to enhance their skills and knowledge of municipal governance is remarkable. Their commitment to education means they are bringing back tools, insights, knowledge, resources, and networks to strengthen their cities. The Institute of Government is proud to partner with GMA to make this expanded training opportunity available to Georgia’s city leaders.”

The GMA is an organization of Georgia’s municipal governments.  It was founded in 1933 and has 521 member cities.  Those cities account for over 99 percent of the state’s municipal population.

According to Kelli Bennett, the GMA’s communications and marketing associate, the organization’s core mission is advocacy for Georgia’s cities during the legislative process, but it also includes services such as an insurance program, purchasing and finance programs, and the training done in conjunction with the Carl Vinson Institute.

An evening of Romantic Valentine’s jazz with GSO Jazz!