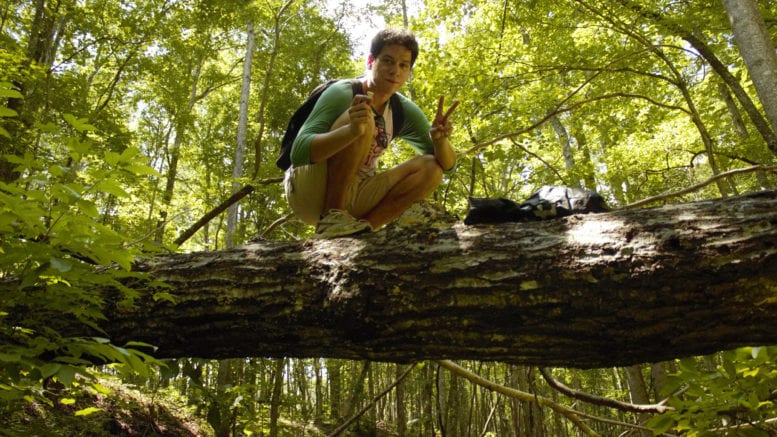 FungiFlora is an enthusiast community of mushroom foragers in Georgia which brings its members together
through their shared love for mycology, the scientific study of fungi and mushrooms.
Unlike most organisms on Earth, the majority of fungi species are difficult to cultivate or
grow in a controlled setting, which makes them not only fascinating but sometimes very
profitable to those that are in the know. John Forsyth and Hyacinthe de la Sinthomee
founded FungiFlora to support the growing community of mycology enthusiasts and to
help educate new explorers of the study about smart and safe ways to identify and forage
mushrooms.

Kennesaw, Ga.– A vast network of organisms connects almost all life in nature, growing inconspicuously underground and on the surface in all shapes, sizes and colors. They adapt to almost any environment, with the power to help or harm their surroundings as a force of pure survival instinct. Millions of species classified as fungi exist in nature, each with unique characteristics and abilities which have come to fascinate a growing community of online and local enthusiast groups, like Georgia’s FungiFlora.

Kennesaw residents John Forsyth and Hyacinthe de la Sinthomee developed a scientific fascination with the global kingdom of fungi after studying various species growing in the backyard of their apartment. The knowledge they discovered from their practice collecting, classifying and even ingesting the edible mushrooms inspired them to create FungiFlora , an online community dedicated to the study and discussion of the organisms.

“I’ve been into mushrooms for a while, but I feel that there is a high barrier to entry when it comes to learning about mushrooms and identification,” Forsyth says. “I thought that I could fill that space and be that entry point for new people.”

Forsyth and de la Sinthomee say that one of the main reasons they want to educate people about fungi is to fight the negative stigma toward mycology, the scientific study of mushrooms.

“I think really it has a lot to do with the idea in modern culture that our only food comes from the grocery store,” says de la Sinthomee. “It’s like, ‘food comes from the grocery store, so if it’s growing outside it must be part of the wild, and therefore harmful.’ But a lot of the mushrooms that people go out to find really can’t be grown commercially. They need a special relationship with nature to grow.” 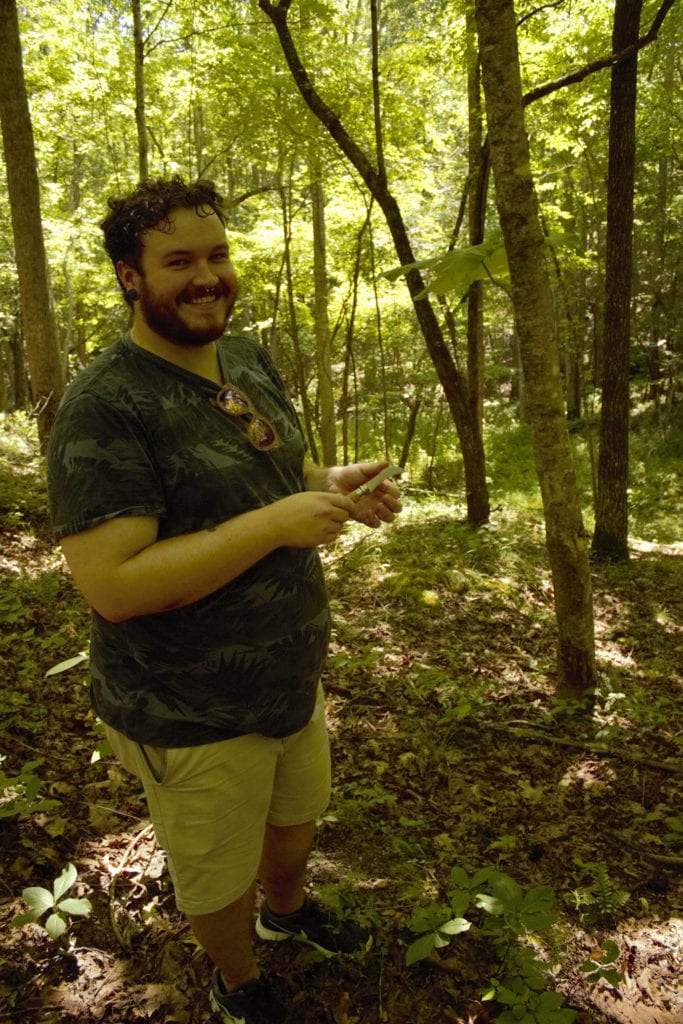 Forsyth and de la Sinthomee operate FungiFlora’s blog, where they write instructional guides and prosaic think pieces on the subject of mushrooms. Their main project, a comprehensive mycology guide called “5 Ways to Start Learning and Hunting Wild Fungi,” is offered to community members as a free download from FungiFlora’s website.

Forsyth and de la Sinthomee are in the process of creating a video course, which they hope will help FungiFlora evolve into a profitable a business, selling their guides and other products online.

Growth of the Community

FungiFlora’s growing online community has connected over 4,000 mushroom enthusiasts all over the world on its facebook page, which is used as an open forum for the members to post pictures and discuss mycology.

Member Claudia Littrell says that growing up in Germany, she always had an interest in fungi, but was too afraid to hunt mushrooms alone in the United States until she became involved with mycology groups. She often forages with Forsyth and de la Sinthomee’s FungiFlora group and even started her own group called the Cave Spring Mushroom Club.

“People like us are starting to do things to educate each other and ourselves,” Littrell says. “People think that if you start a mushroom club, you must know everything about mushrooms. But we are all here to teach each other.”

Mona Folds and her son Daniel Folds have enjoyed mycology and wild foraging together since Mona was raising Daniel in rural Alabama. Mona makes medicinal tinctures by dissolving beneficial fungi in alcohol.

“I got into mushrooms in 2014, when I found my first morels [Morchella esculenta],” Mona says. “Every mushroom I find, I take pictures and post them online.” 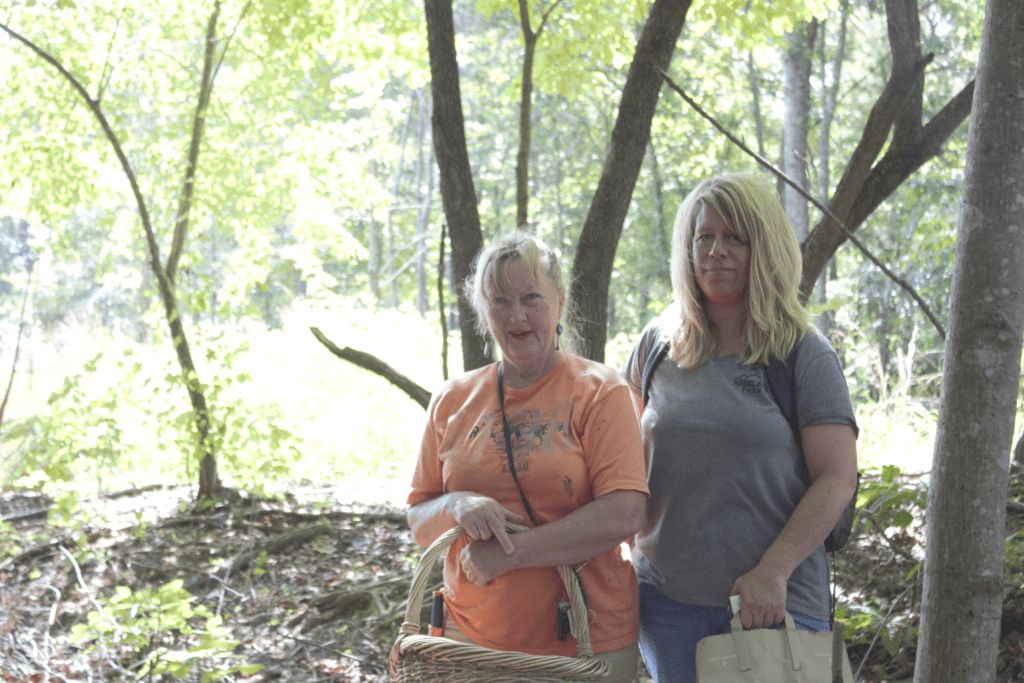 FungiFlora hopes to educate amateur mushroom hunters so that they feel not only safe but excited to study wild fungi. Forsyth and de la Sinthomee feel that a lot of people are too afraid to study mushrooms because of the negative reputation given to them by popular media and folklore.

“Mycophobia, or the fear of mushrooms, comes from ignorance of the entire organism,” Forsyth says. “There’s a lot of folklore and stigma about mushrooms being poisonous. Like a toadstool is really just a mushroom with a negative connotation attached to it. Just the fear in general has to do with the image of ‘the witch’ brewing poisons and potions.” 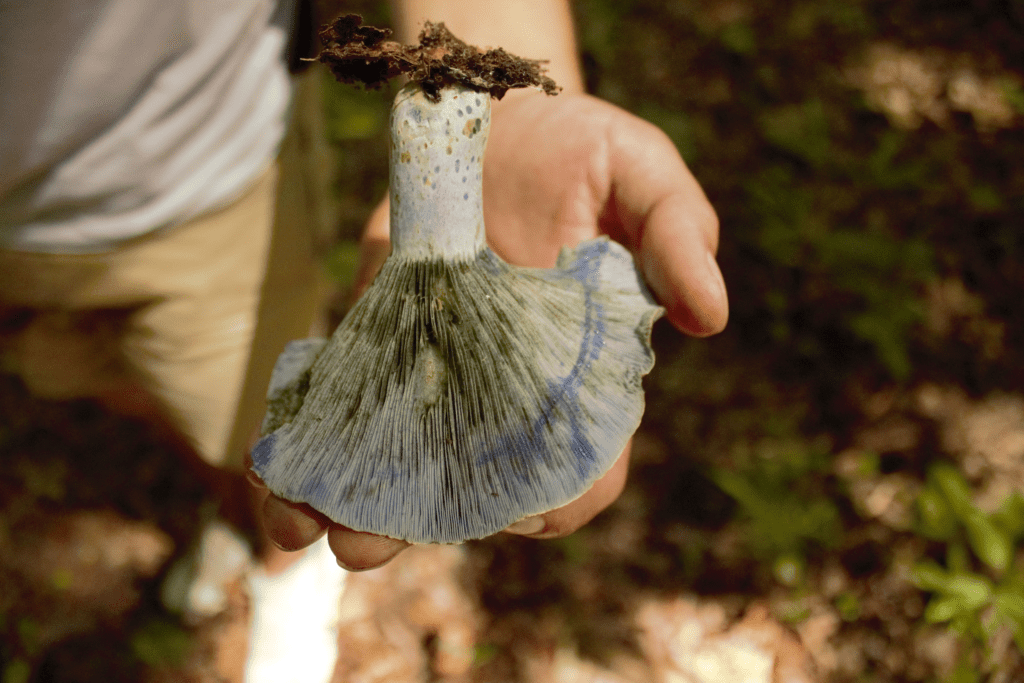 The idea that wild mushrooms cause psychedelic inebriation comes from exaggerated depiction of a small percentage of mushrooms which contain psilocybin, a natural psychoactive compound. Psilocybin is sometimes used for shamanic rituals in tribal cultures, but it is now a controlled substance in the United States.

“One of the most popular depictions of psychoactive mushrooms in the media is Amanita muscaria, a red cap with white speckles,” Forsyth says. “It’s sometimes called the ‘Mario Mushroom’ because it can make you feel funny, like your body is either really big or really small. It’s also probably the inspiration for ‘Alice in Wonderland.’”

Forsyth says that most mushrooms are actually edible. Some have negative effects and might cause illness, but only about one percent of mushrooms will actually kill you. That being said, harvesting unknown fungi can still be very dangerous. The motto in Mycology when dealing with an unknown fungus is “when in doubt, throw it out.”

“There is a white mushroom in China that is very commonly eaten from the wild,” de la Sinthomee says. “A lot of Asian immigrants get poisoned looking for it in America because we have one here that looks just like it called Amanita phalloides, or the ‘Death Cap’, which is one the deadliest mushrooms out there.” 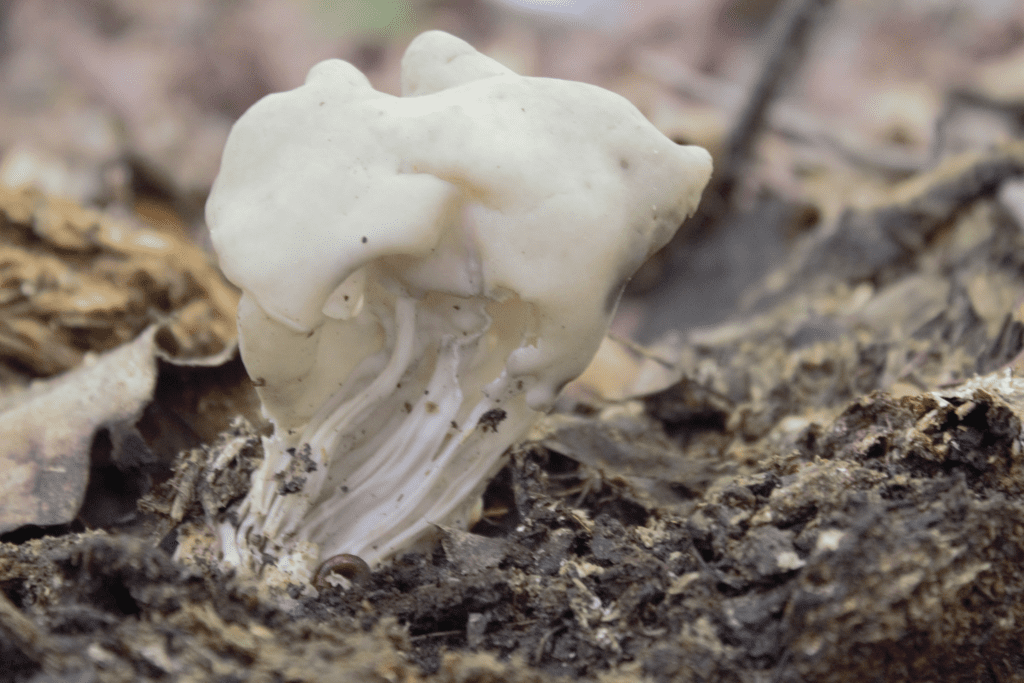 The real danger of wild Death Caps is their resemblance to other edible mushrooms such as Volvariella volvacea, the “straw mushroom,” and Amanita caesarea, “Caesar’s Mushroom.” De la Sinthomee says that Death Caps are the most common cause of mushroom poisoning, and most victims say that they are delicious.

“The way it works is pretty messed up,” Forsyth says. “You feel some liver interruption maybe a day or two after eating it but then it will go away. You feel good for a week, like nothing is wrong, and then your liver just breaks down and you die.”

Forsyth says that even with the most dangerous mushrooms, you can usually do a taste-test to determine if a wild fungus is safe.

“If it’s a little spicy or bitter it’s probably inedible, but if it’s sweet you can probably eat it,” Forsyth says. “As long as it doesn’t hit your liver, you’ll be ok.”

Mycologists and mushroom enthusiasts like John Forsyth, Hyacinthe de la Sinthomee, Claudia Littrell and Mona Folds come together from different perspectives of interest. Some foragers are interested in aesthetic mushroom photography, while others are looking for culinary, medicinal or even recreational usage.

Because many species of edible mushrooms cannot be commercially grown, some foragers can make thousands of dollars profit from even just one day’s worth of foraging. De la Sinthomee says he heard of a forager who recently picked more than $30,000 worth of Morels out of a forest in Georgia. VICE made a short documentary about Ian Purkayastha, a culinary mushroom supplier in New York whose small operation makes $3-$5 million dollars per year, mainly from the sale of foraged truffles.

The different interests and characteristics of mushroom foragers make them as unique as any species of mushroom, yet they are all connected by their mutual respect for fungi.

Foragers typically carry wicker baskets or mesh bags with small holes in them when collecting mushrooms. This is because mushrooms are constantly secreting microscopic spores, which can potentially sprout into more fungi if allowed to spread onto the ground. 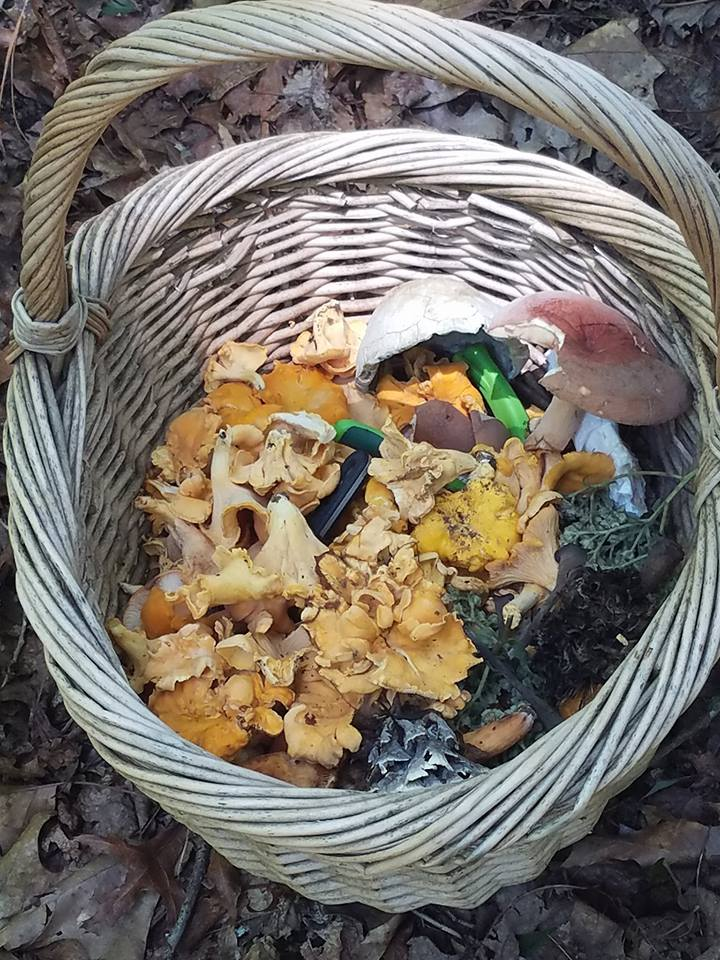 Mushroom enthusiasts often describe their connection with fungi as a spiritual one, especially after ingesting them. Members of FungiFLora say that their passion for fungi makes them feel more connected with nature. 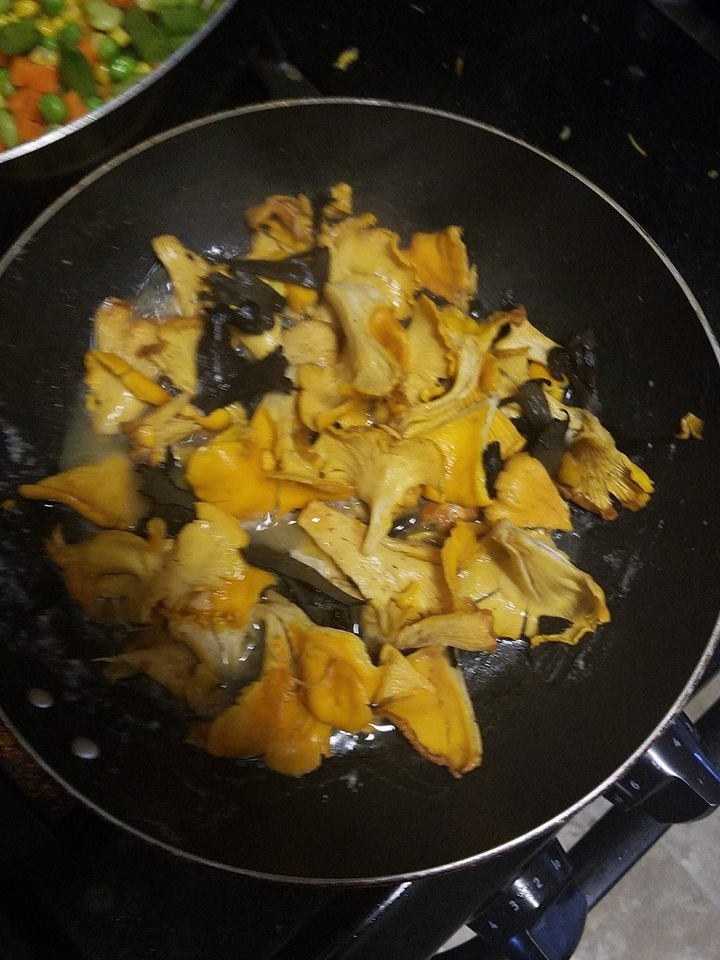 “Humans share about 70 percent of our DNA with fungi,” de la Sinthomee says. “We are actually closer related to them than we are to plants. Mushrooms that form symbiotic relationships with trees actually breathe out carbon dioxide for them, just like we do.”

Forsyth says that the part of fungus which can be observed above ground, which we call the “mushroom,” only makes up about 10 percent of the organism. Beneath the mushroom is a wide network of mycelium, similar to the roots of a plant, which connects the local fungi network. Through the mycelium, the fungi share nutrients with each other and work together to survive in the environment.

“I feel a spiritual connection with nature when I walk through the forest, looking for mushrooms,” Forsyth says. “There’s just something special about it.”