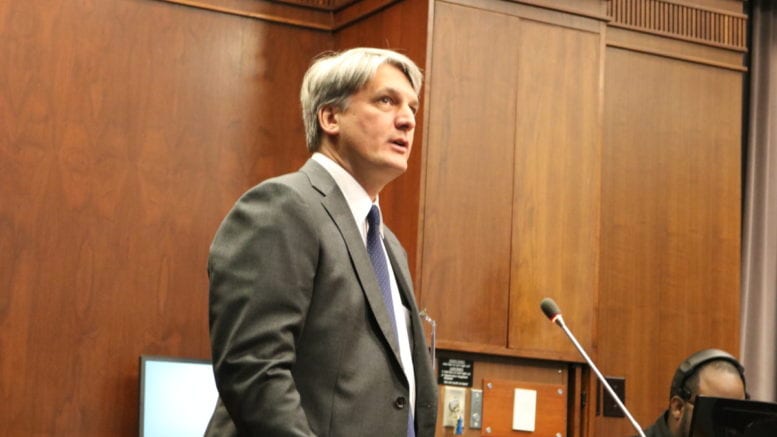 Sharon Mason, the president and CEO of the Cobb County Chamber of Commerce said, in a special work session held by the Board of Commissioners Monday, said that among business leaders the Chamber had talked to on a listening tour, the main complaint about the county, both from those companies that move here, and those that reject the county, has been traffic congestion and the lack of public transit.

“Of the ones that do take us off the list, and let us know why, 45 percent of them have said it’s due to lack of transit connectivity,” Mason said. The BOC held the work session to discuss the county’s response to public transit legislation working its way through the Georgia legislature.  The legislation would restructure the state’s approach to public transit administration and funding.  Among other things, versions of the bills in the House and Senate would rename the Georgia Regional Transportation Authority (GRTA) to Atlanta-region Transit Link (ATL), provide a framework for special districts that could span county lines, provide for the imposition of transit-specific local option sales taxes, and change the referendum requirements for fixed guideway transit.

The meeting featured speakers from government bodies, community improvement districts, and included public comments at the end of the meeting.

Among most active advocates for the improvement of public transit in the county were the community improvement districts, areas where local businesses voluntarily tax themselves for infrastructure improvements. Representatives from the Town Center CID and the Cumberland CID spoke.

Tracy Rathbone, executive director of the Town Center Community Improvement District said, “One of the roles of CIDs is to educate and advocate for what we believe are the best mobility solutions, not just for one’s district, but for the entire county and the entire metro Atlanta region.  Our regional transit system, we believe, is a win for Cobb County.  We believe that transit is a priority for Cobb County, and a key priority for the Town Center Community Improvement District.  We have more than 100,000 employees that come to the district on a daily basis, we have 36,000 students at Kennesaw State University, we have two of the CobbLinc systems, routes 40 and 45, that bring 1,000 riders on a daily basis to our district.”

During the public comment section, several residents raised concerns that the new legislation would result in a lack of local control over projects. Ron Sifen, a past president of the Cobb County Civic Coalition, said that the approach to transit was often economic development at the expense of mobility, and said that Bus Rapid Transit and Arterial Rapid Transit could benefit a larger number of riders than rail projects.

Linda Bell, of Mableton, a member of Transit4Cobb and the Sierra Club, said that the environmental benefits of public transit are often overlooked, and that the Sierra Club has been working on transit issues for over 10 years.

Be the first to comment on "Chamber CEO: 45 percent of businesses rejecting move to Cobb do so because of lack of public transit"