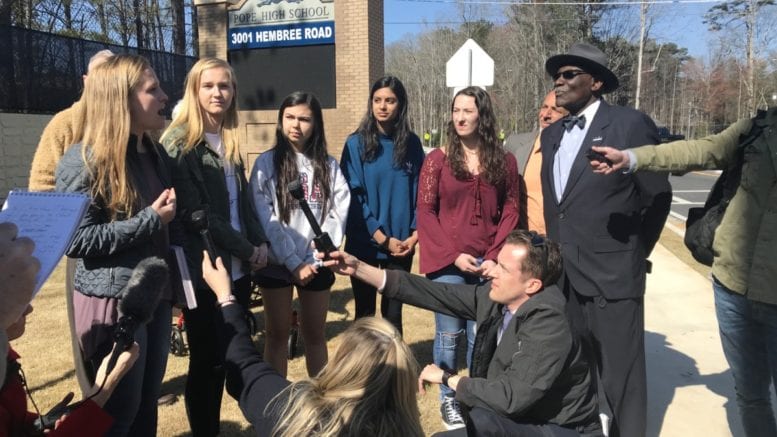 The Cobb County chapter of the Southern Christian Leadership Conference is backing Cobb students who participate in tomorrow’s national walkout at 10 a.m. Dr. Ben Williams, president of the Cobb chapter, stood with five student organizers from Pope High School as they held a press conference in front of the school this afternoon.

“They are part of a national movement of young people compelled by their conscience,” Williams said.

Cobb County released a statement two weeks ago saying it would not support the walkout and that students who choose to participate may face disciplinary action. This is in contrast to other local districts, including Marietta City Schools, which have stated participating students will not be punished.

Senior Kara Litwin said Pope leaders met with Principal Tom Flugum for the first time as soon as they returned from the February break, but communication has been unclear since Cobb released its statement. They have heard that all Pope participants will face three days of in-school suspension, but have also been told it will depend on a student’s previous disciplinary record.

“We live in a school district where they taught us to stand up for our rights, and now they are saying ‘we didn’t mean it,’” Litwin said.

Field Director Rich Pellegrino wants Cobb students to know that the SCLC will support any students in the county who are punished in excess of normal consequences and that “no legitimate university will hold this against you.” Cobb SCLC Attorney Gary Pelphrey also offered support to students should punishments be excessive or if they encounter issues with college applications.

The March 14 date was selected to commemorate the one-month anniversary of the shooting at Marjory Stoneman Douglas High School in Parkland, Fl. It will take place at 10 a.m. across all time zones and last for 17 minutes, one minute for each victim. Students will pass out voter registration forms, read the names of each victim, and there will be a student speaker.

The school is providing two police officers and a third will attend at the invitation of the organizers. Administrators will also oversee the activities for safety reasons, but according to the students, teachers are not allowed to attend or discuss the event.

Whereas Walton High School had 2,300 students out of 2,700 signed up to participate a week ago, Pope has about 300 out of 1,700. Organizers think the lower number is because students are unsure about the severity of possible punishments.

Regardless of consequences, these students are determined to make the walkout a success. “No child should have to go to school and think about their safety,” said student Jena Paramesh.

“I’m a little ashamed it took me this long to do something,” said student Lauren Bengston. “But we’re doing it now.”

Lian Kleinman has friends that attend Marjory Stoneman Douglas, and Sarah Clement once attended a school about a mile from MSD, so they said they feel a personal connection and motivation to participate tomorrow.

Additionally, students stated that there have been no safety drills or lockdowns to prepare for a school shooter since the Parkland event. The school did conduct a routine fire drill, but some students panicked and others refused to leave the school building.

The organizers plan to start a school club that will focus on current events and issues so that students can stay informed and involved in the future.

2018 elections, Cobb County board of commissioners