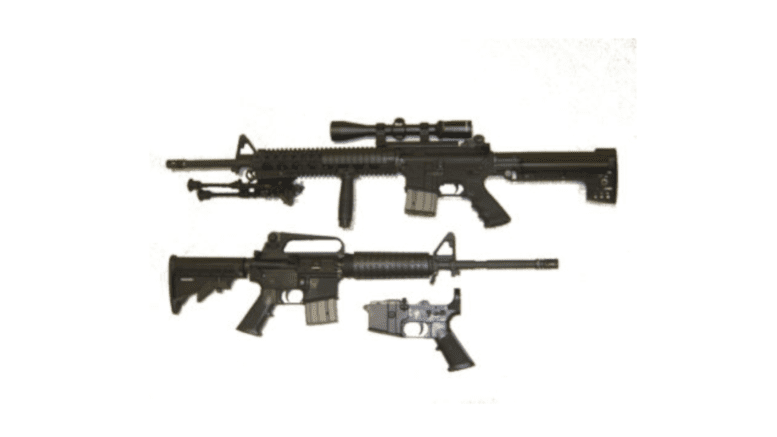 WASHINGTON — The CEOs of major gun manufacturing companies told a U.S. House panel on Wednesday that their production of AR-15-style guns did not contribute to recent mass shootings that left 29 people dead, and that the killings were due to the actions of individual shooters.

Ahead of the hearing, the House Oversight & Reform Committee released a report showing that five major gun manufacturers made $1 billion in sales from semiautomatic weapon sales over the last decade and sales “skyrocketed” in 2021. A Georgia company, Daniel Defense, saw its revenue from AR-15-style rifles triple from $40 million in 2019 to $120 million in 2021, the report found.

This is like blaming manufacturers of forks and spoons for obesity.

AR-15-style weapons were used in mass shootings earlier this year in Uvalde, Texas, where 19 children and two teachers were killed, and in Buffalo, New York, where a white supremacist targeted a grocery store in a predominantly Black neighborhood and killed 10 Black people.

“In short, the gun industry is profiting off the blood of innocent Americans,” the chair of the committee, Rep. Carolyn B. Maloney, a New York Democrat, said in a statement ahead of the hearing, which was held to investigate the manufacturers’ role in gun violence.

Following the July 4 mass shooting in Highland Park, Illinois, that left seven dead, Maloney said the committee is also examining how these companies market AR-15-style weapons to civilians. So far, there have been 371 mass shootings this year, according to the Gun Violence Archive.

The committee report found that those companies used “disturbing sales tactics — including marketing deadly weapons as a way for young men to prove their manliness and selling guns to mass shooters on credit — while failing to take even basic steps to monitor the violence and destruction their products have unleashed.”

“I believe that these murders are local problems that have to be solved locally,” Daniel said.

The weapon used in the Uvalde school shooting and a Las Vegas shooting that left 60 dead was from Daniel Defense, which made $528 million from 2012 to 2021 from AR-15-style rifle sales, according to the committee’s report.

Maloney said that because gun manufacturers are not going to stop selling assault weapons, Congress will need to take action.

“You market weapons of war,” she said to the gun manufacturers. “When someone pulls the trigger, you refuse to accept responsibility.”

House Democrats are moving to pass a ban on the assault rifles. The House Judiciary Committee passed the bill out of its committee last week on a party-line vote, but a floor vote likely won’t occur until lawmakers return from their August recess, and could be close.

This is one of several hearings the committee has held on gun violence in America.

Nearly all the leaders of the gun manufacturers that the committee requested to testify before them agreed. The only one who did not appear before the committee was Mark P. Smith, the president and CEO of Smith & Wesson Brands, Inc.

Republicans on the committee pushed back against Democrats and argued that the Second Amendment allowed for Americans to have these firearms and that gun manufacturers are not to blame for gun violence.

Rep. Byron Donalds, a Florida Republican, said that Congress should not quickly pass laws based on tragedies.

“In my view, we do not have the ability to just simply pass laws because of tragedy or because of heartache,” he said. “Those tragedies do not change the Second Amendment to the United States.”

Rep. Jody Hice, a Greensboro, Georgia Republican, said that he was disturbed that Democrats were going after private companies and slammed the hearing, saying it was for “political purposes.”

“This is like blaming manufacturers of forks and spoons for obesity,” he said. “The American people have the right to own guns.”

Democrats raised concerns about how gun manufacturers advertise their AR-15s, particularly advertisements that target young men, drawing parallels between owning an AR-15 and being a solider.

Rep. Gerald Connolly, a Virginia Democrat, pulled up an advertisement from Daniel Defense that showed a soldier with an AR-15 and the slogan “Use what they use.”

“It would seem to imply that you are encouraging people to purchase military weapons and ‘Use what they use,’” he said to Daniel. “Is that your intent?”

Daniel said that the company sells products to the military “and we market products to civilians based off of our military heritage that we provide the best products that can be bought.”

One of the witnesses, Ryan Busse, a senior adviser at the Giffords Law Center, a gun control advocacy and research center, said that marketing to young men has been a tactic the gun industry has implemented in the last decade.

The Giffords Law Center is a gun violence prevention organization founded by former U.S. Rep. Gabby Giffords after the Arizona Democrat was shot and survived an assassination attempt.

Busse said he used to work in the gun industry as an executive, but was pushed out because “there is no place in the industry for anyone who believes in moderation or responsible regulation.”

“By 2007, change was happening as most companies began combining guns with the political fear and conspiracy machine of the NRA,” he said in his statement. “It worked very well because the same things that drove NRA radicalization, also drove gun sales.”

Busse said that the advertisements that gun manufacturers run are irresponsible and warned lawmakers “that there is much more of this on the way.”

Another witness, Kelly Sampson, senior counsel and director of racial justice at Brady: United Against Gun Violence, a gun conrol group, said that manufacturers rely on militaristic tropes to market firearms to young men, particularly “those who would oppose the government.”

She added that these marketing tactics, also put vulnerable communities at risk, and “such marketing rests on a foundation of longstanding biases (about) Black and Brown people.”

“These dangerous ads must stop,” Rep. Rashida Tlaib, a Michigan Democrat, said to the gun CEOs. “They’re breeding domestic extremists and putting communities of color, communities that are incredibly vulnerable – especially like children in our schools and minority groups … at risk.”

The report from the committee also found that the firearm industry has been marketing indirectly and directly to white supremacist groups, “playing on fears of government repression against gun owners and fomenting racial tensions.”

“The increase in racially motivated violence has also led to rising rates of gun ownership among Black Americans, allowing the industry to profit from both white supremacists and their targets,” according to the report.

The report also detailed an ad from a 2017 Daniel Defense inventory catalog that shows an image of a shooter with a tattoo of a Norse symbol known as the Valknot. This symbol is associated with transnational white supremacist groups and is deemed a hate symbol by the Anti-Defamation League, which is an international Jewish non-governmental organization that specializes in civil rights law.

Busse said that when he was in the industry, he felt that many gun manufacturers “turned a blind eye” to marketing that attracted white supremacists.

“There is an aura and approach in the industry where any single gun customer is good, no matter how detestable their views or their actions may be, and I saw dozens of examples through my career of the acceptance of or looking away from racist things,” he said.