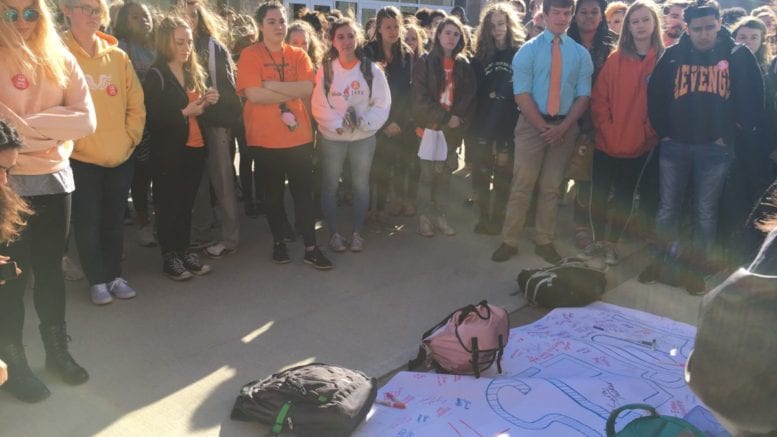 The grounds of Sprayberry High School were quiet this morning while the National School Walkout was taking place. Three police cars were visible, one in the front and two blocking the entrances to the parking lot. Staff members with walkie-talkies were stationed outside entrances and at the corner of Sandy Plains and Piedmont Rd. An employee stated that staff members were also posted inside at every door so that students would be discouraged from leaving the building. Based on Instagram posts, students appear to have gathered in the cafeteria.

Students at Campbell High School gathered in a parking lot with a sign that said, “NRA You have blood on your hands.”

At Walton High School, only some students were visible as they gathered on campus, mostly out of sight from the street, but a group of parents gathered in support on the sidewalk. Instagram posts show students in the stadium. Student Anisa Handa estimated that 260 students took part. 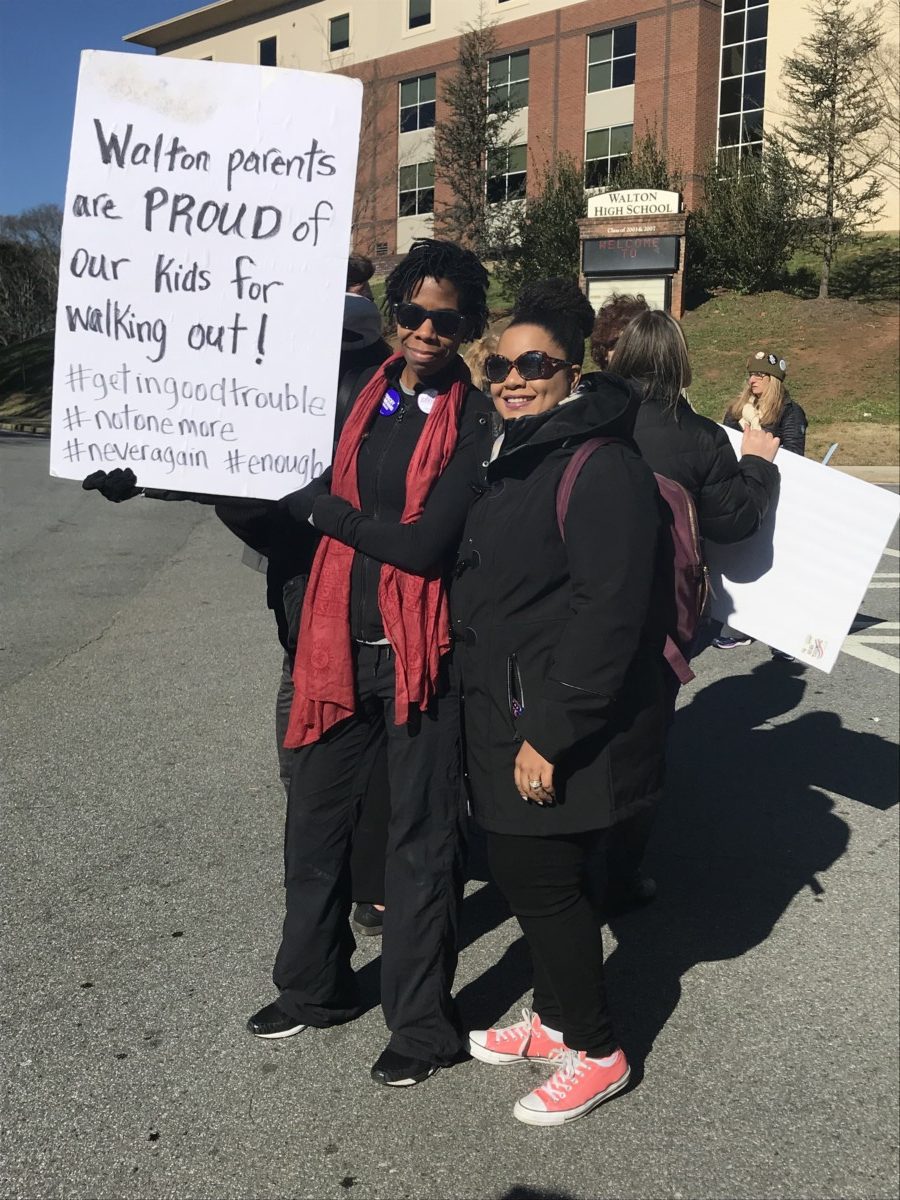 Beth Freeman, a member of Moms Demand Action, has a son at Dodgen Middle School and joined the parents gathered outside Walton.

“It’s our job to vote for people that are going to keep these kids safe,” Freeman said. “That’s why I’m here to show my support for these kids too, because I think it’s worth in-school suspension.”

Tina Strawn also joined the parent group outside the school, holding a sign that said “Walton parents are proud of our kids for walking out!” Her son is a student and she was unsure whether he had opted to participate. Strawn said he was initially enthusiastic about the walkout, but rumors of possible shooters made him nervous.

“I think a lot of things are circulating to scare the kids, and so he was hesitant. This morning he wasn’t sure what he was going to do. I think he was leaning toward not walking out,” Strawn said. “So I was telling him that I heard recently that they investigated and they are ensuring all the students’ safety, especially on a day like today, with heightened security. So it’s just a matter of I wanted him to have all the information so he could make to a decision he wouldn’t regret, so I’m looking forward to him texting me and letting me know what he did. I told him I will be proud of you and support you either way.” 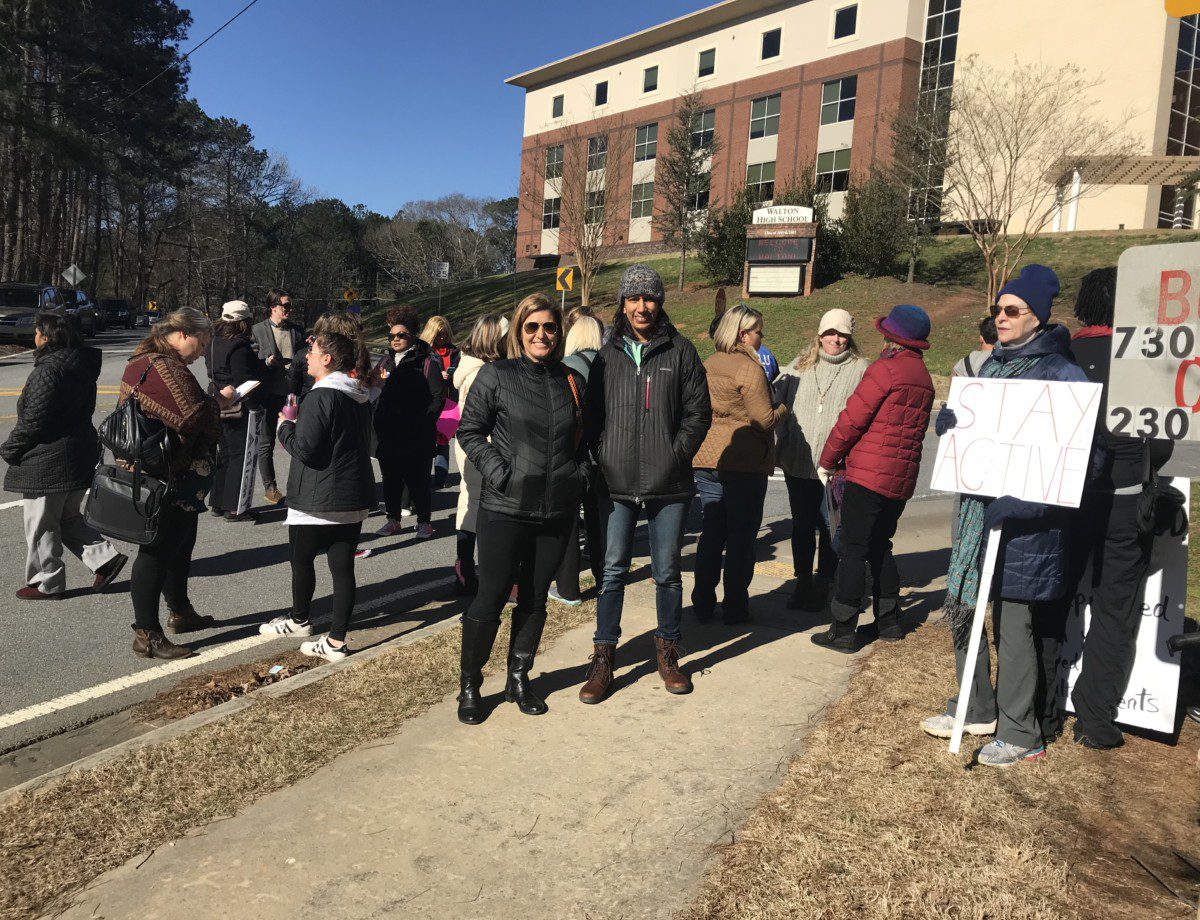 Hannah Andress, one of the organizers at Lassiter High school, said, “A lot of kids didn’t show up. I would say it was only 30. I’m rather disappointed with our student body because we had 300 signups. But it only takes one voice to make change and now we have 30.”

None of the students contacted reported any specific punishments being handed down today, but it was an early release day and they were dismissed at 11:30.

Richard Pellegrino of the Cobb SCLC said in a Facebook post that their attorneys will get involved if any of the conflicting reports of students being physically blocked or locked in at any school are true.

“Please allow me to provide you with a factual update regarding the reality of events in CCSD today. In short, only a small fraction of our students engaged in protests, mainly at a relatively small number of schools. Over 99% of the students in CCSD behaved appropriately and did not violate school rules in any way. Over 90% of our schools did not experience any significant disruption. Less than 1% of our students engaged in some sort of protest.

In total, less than 1,000 students engaged in a brief protest out of approximately 112,000. Walton, for example, only had about 250 students walk out, which was far less than the 2,300 number that had been recently forecast for that location.

In general, nearly all of our students complied with the school rules and worked successfully with our principals to find non-disruptive ways to express any concerns. Congratulations to both our local school administrators and to our students for handling this situation so well.” 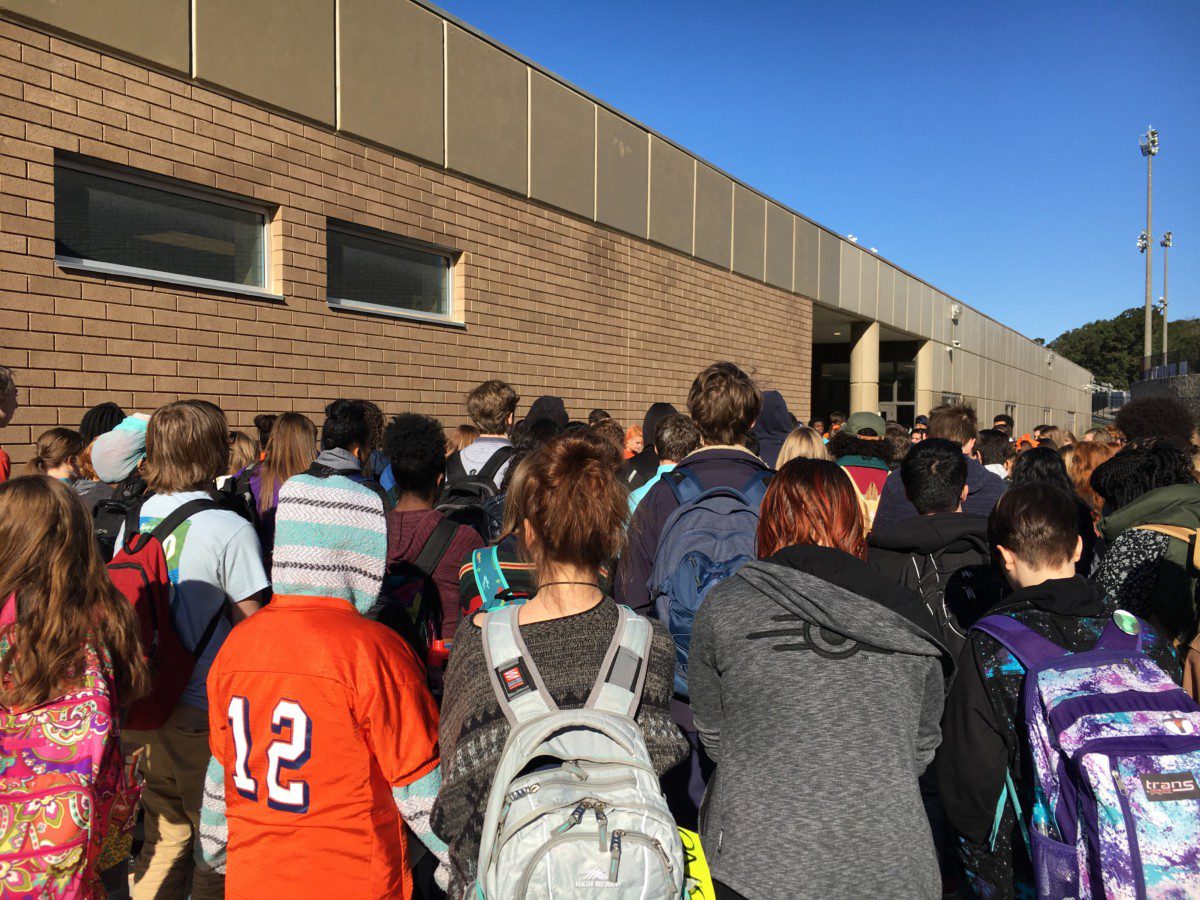 Bookman: Sometimes, it’s not about the money. Take Music Midtown, for instance.