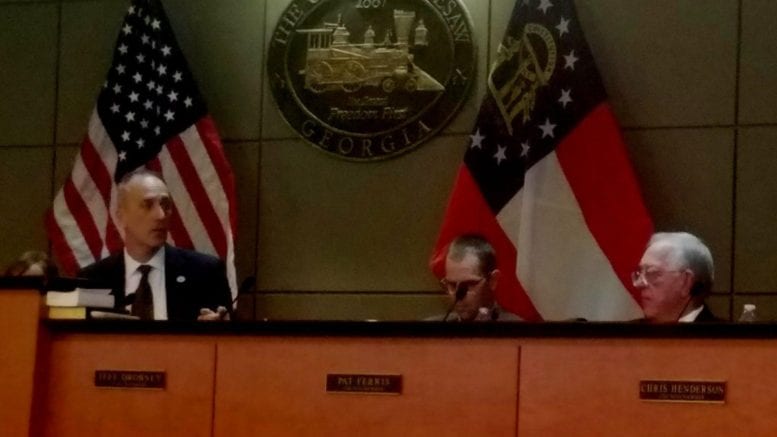 Mayor Derek Easterling addressed the proposal by Croy Engineering, LLC to approve funding of $27,850 for construction of road signs on Cherokee Street, Jiles Road and Old 41 Highway. Councilman Pat Ferris expressed concern that the work might need to be redone in the future but approved the motion following comments from Project Engineer Zach Buffington.

The project was originally proposed as a resolution to traffic congestion and safety concerns due to large trucks stopped in the middle of intersections. The City initiated a contract with Croy Engineering to construct the reroute signs in October 2013, but the project was stalled by a Department of Transportation road-widening project.

“I’ve got a real concern that at some point we’ll put these signs up and then we’re going to be pulling them down, re-engineering and then putting them back up again,” Ferris said. “We shouldn’t pay for it twice.”

Ferris expressed concerns that the project may conflict with plans for a road construction project to improve the safety and traffic flow from Cherokee Street to McCollum Parkway. The 2013 plan originally proposed signs at four locations but the number was lowered to three due to conflict with other construction plans by the Cobb Department of Transportation.

Buffington assured the Council that Croy Engineering is coordinating with the DOT and Atlanta Regional Commission for efficient placement of the signs.

“They’ve had a lot of different requirements that we’ve had to meet,” Buffington said. “Initially, the project was two signs at each phase. They wanted to change that so the first phase is now three signs, the second phase is just one sign on Cherokee Street, near the interstate, and part of the cost of the project is to design and finalize construction of the third phase.”

Buffington reiterated the safety concerns of large trucks stopped in the middle of intersections. Particularly during rush hour in Downtown Kennesaw, traffic is often stalled by truck drivers who are unfamiliar with the area.

“There’s a real problem with large trucks and tractor trailers going over the railroad tracks and getting stuck,” Buffington said. “There are already small signs at the intersections but we need larger ones to get those drivers’ attention.”

Following Buffington’s comments, the council unanimously approved funding for all three sign locations. After the meeting, Ferris maintained his concerns for the efficiency of the project but said that he agrees with the importance of it.

“Those signs are definitely needed,” Ferris said. “I just want to make sure that we only do it one time and that we do it right, as a coordinated effort. It can be wasteful if we aren’t looking to the future.”

The Council, including the mayor, assured Buffington throughout the discussion that drivers’ safety is their top priority when making these decisions but that efficient use of taxpayers’ dollars must also be a concern.