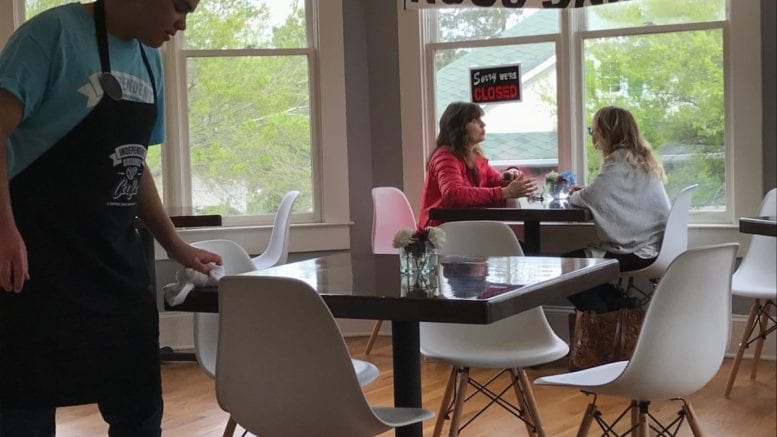 Kennesaw has a new coffee shop called Independent Grounds Cafe. The idea came to Lorna Heid last fall, inspired by her daughter Emma who is a sophomore and works in the coffee shop at Kennesaw Mountain High School. Emma experienced a traumatic brain injury at birth due to meningitis. Heid was talking to another special needs mom who was looking into a Jimmy John’s franchise so her child would always have a place to work. The idea intrigued Heid who began to look into various franchises, but found it too expensive and difficult. 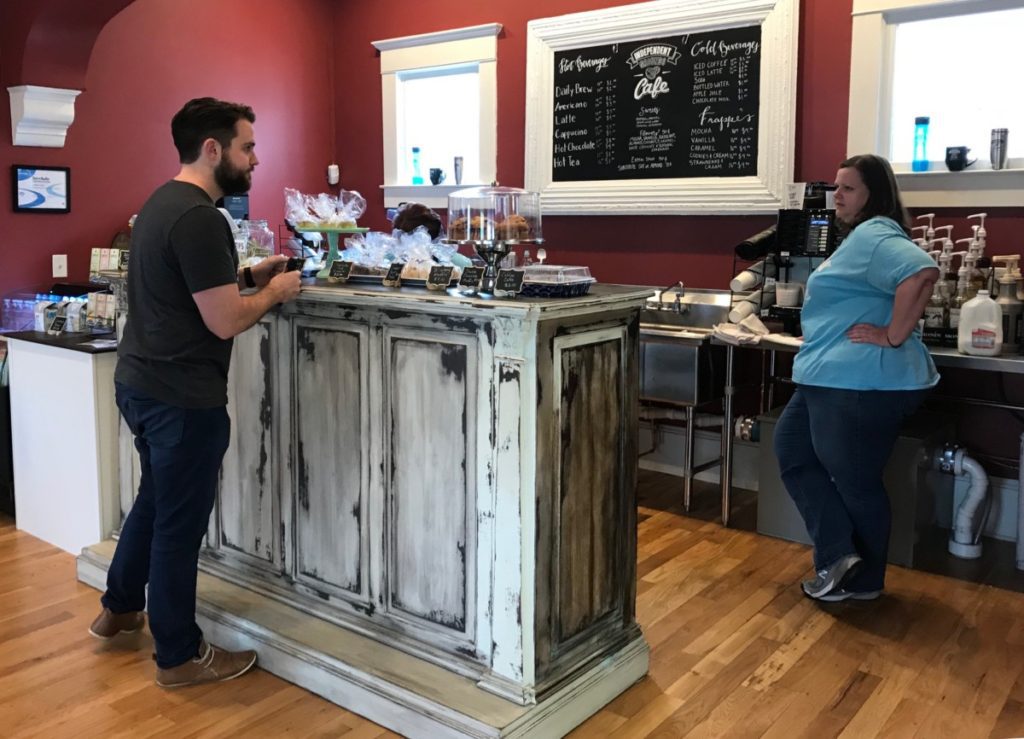 Lorna Heid talking to a customer (photo by Rebecca Gaunt)

She wrote a business plan and the spot where her daughter had her second birthday party, formerly a Jake’s Ice Cream, immediately came to mind. “I have always loved this spot and knew that it could be something special,” Heid said.

Heid was a paralegal for 17 years. Now she spends six days a week at her own coffee shop, where she employees ten young adults with intellectual and developmental disabilities.

“I wanted it to be really good coffee because I wanted to keep the neighborhood people coming, and not just coming for the novelty, but coming for the great cup of coffee,” Heid said. “And I wanted my employees to really be able to shine, show off their personalities, and be able to learn tangible skills that they could take to any other job.”

She said she hopes her shop will inspire other employers to think outside the box when hiring employees.

“I think a lot of people think, well, that will slow things down. And that’s not necessarily true,” Heid said. “But I think once they see it in action, it’s a better example to them than just saying you should hire…”

When she started the hiring process, she put the word out at her daughter’s gymnastics program and reached out to the transition academies for the area’s high schools. All staff members complete an application and learn the interview process.

Anita Acree and her son Drew also work at the shop. He loves being a cashier so Heid said it was a great fit. On this day, Acree and Ty Greene were working with Heid. A group from one of the transition academies was present and included two more employees, Alexis and Andre. Andre was all smiles and Alexis was eagerly anticipating her next shift on Saturday. After they left, Greene was able to take a break and talk about his favorite drink, the frappe.

Heid also has two college students working there who have a background working with people with special needs.

Rev Coffee Roasters in Smyrna supplies the beans Heid uses to make the coffee and she gets the baked goods from a place in Kennesaw.

“The neighborhood needed an independent coffee place, and I think myself and the employees, we needed it. It’s gonna be a good mix,” Heid said. “And I know in summer, when we put tables outside and people can just hang out, it’s gonna be even busier.”

Independent Grounds Cafe is located at 3900 Legacy Park Blvd. Suite A100 in Kennesaw.

Helping those with intellectual/developmental disabilities during COVID-19

The Book House in Mableton