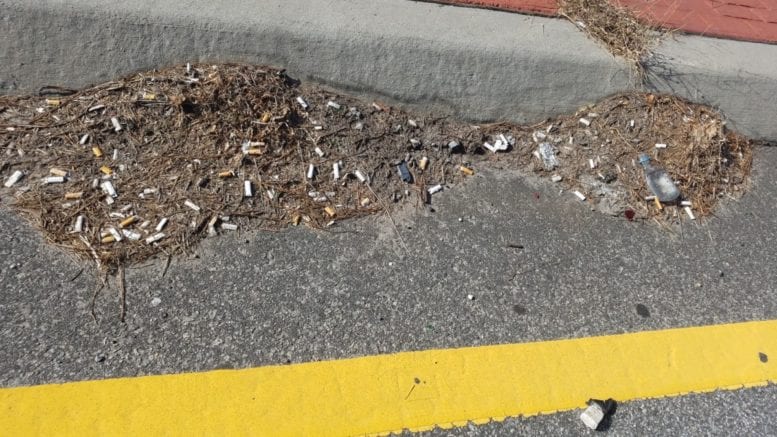 MARIETTA, Ga. — Litter. It’s alongside the streets you walk, the highways you drive and even in the water supply: an illegal action — but a common one that’s hard to combat.

Law enforcement does the best they can to contest littering, but those littering must be caught in the act by an official in order to receive a ticket, or reported by a citizen and found guilty. In response to the abundance of litter, volunteers have come together in communities throughout Georgia to offset it through both cleanup and education.

According to Georgia Department of Community Affairs, anyone caught littering in Georgia can be charged with a misdemeanor and be punished by a fine between $100-$1,000. The law also allows the court to make the violator clean up the littered area and to publish their name in the newspaper.

Deputy Brantley Worley of the Pickens County Sheriff’s office said it’s not very often that people are caught in the act of littering — maybe once or twice a week.

“People are going take things and throw it out the window and will assume someone else will pick it up,” Worley said. “I had to stop a guy for littering the other night and that’s what he told me. We either give them a ticket or we give them a warning.”

Some of the most common types of litter include fast food waste, paper and aluminum products according to a 2016 article on statisticbrain.com. The article also states that 75 percent of people admit to littering within the last five years and that 50 percent of littered items are cigarette butts.

Whitehead said that a common problem is that a lot of people don’t see cigarette butts as litter.

“Number one is habit,” Whitehead said. “Number two is often-times people don’t really know what is litter and what is not. You can say ‘don’t litter,’ but if there aren’t trash receptacles or recycling bins in big pedestrian traffic areas, then you’re kind of asking for trouble.”

Litter negatively impacts the environment according to an article on Sciencing.com by creating harmful toxins and pollutants.

“Long term, it would have major damage to marine life,” Seelarbokus said. “If you think of litter going to landfill, it never biodegrades, so it stays there a long time.”

Seelarbokus said that when litter from a landfill is carried down to the water system, it gets in through the aquifers and can contaminate the water.

According to the Clean Water Campaign, trash and litter that passes through a storm drain or travels down a drainage ditch washes directly into nearby rivers and streams, harming drinking water supplies and wildlife.

Clean water has become an important part of the clean-up movements in Georgia, including Sweetwater Brewing Company’s annual “Save the Hooch” campaign, where money is raised annually to help clean the Chattahoochee River.

Georgia, like most states, hosts a multitude of organizations that band people together to clean up the community. Keep Georgia Beautiful is the biggest organization in Georgia when it comes, specifically, to litter clean up.

Whitehead said Keep American Beautiful started as a PSA organization to help spread the word about not littering. Keep Macon Beautiful became their first affiliate and Keep Georgia Beautiful, the first state affiliate. Georgia has 76 affiliates within the state — the largest amount in the nation.

White also said that general litter cleanups, with a huge role played by Keep Georgia Beautiful, have reduced the amount of litter in Georgia by 75 percent over the last decade.

Keep Cobb Beautiful is one of the 76 affiliates of Keep Georgia Beautiful. Cobb County resident Barry Krebs is the head of Cobb County’s Adopt-a-Mile Program and member of Lion’s Club, a service club organization, which works in conjunction with Keep Cobb Beautiful to clean up the litter around South Cobb.

According to keepcobbbeauitful.org, in order to begin the process of adopting a mile, a coordinator at least 21 years of age must be selected and a mile long stretch of road must be identified for “adoption” before filling out a form to apply. After going through training and a team has done their first cleaning, a road sign is put up marking their achievements.

“We’ve gotten 33 miles adopted in the last year and half, and churches have really stepped up to help out,” Krebs said. “I’m a really big fan of Adopt-A-Mile. When you have a sign with your name on it, it’s embarrassing if you let it get littered.”

Krebs said he got involved in litter cleanup in 2014 and was surprised at how much he enjoyed it.

“Our litter index is in half from what it was a couple years ago and it’s made our environment a better place to live — cleaner,” Krebs said. “We have become a tighter community because of this.”

Attitude toward littering is the source of the problem

Despite the fact that Georgia has come far in litter clean up in the last decade, it doesn’t get to the source of the problem — the act of littering itself.

According to the Athens-Clarke County website, the main reason people litter is because of their attitude  —  how they feel in certain places  —  the most common of which include places that are cleaned periodically, places where they feel no sense of ownership and in places where there is already an accumulation of litter.

Krebs said that fast food places and convenience stores are where most litter comes from.

“I got Keep Georgia Beautiful to attend this year’s Georgia Association of Convenience Stores show,” Krebs said. “I want them to promote recycling and litter production. I’m not a fan of force, but I am a fan of positive encouragement, and I hope Keep Georgia Beautiful will positively encourage other convenience stores to promote positive change.”

Keep Georgia Beautiful, along with the help of other organizations, has done a huge part in helping law enforcement combat the problem by cleaning the litter throughout Georgia, but education through awareness will help to stop the problem at its source.

“The biggest thing is to help enact behavior change,” Whitehead said. “You can have cleanups all day long, you can leave signs posted, but until people change their habits, we want to push toward behavior change, changing their habits and making better choices.”

Two events in the Riverside community this Saturday