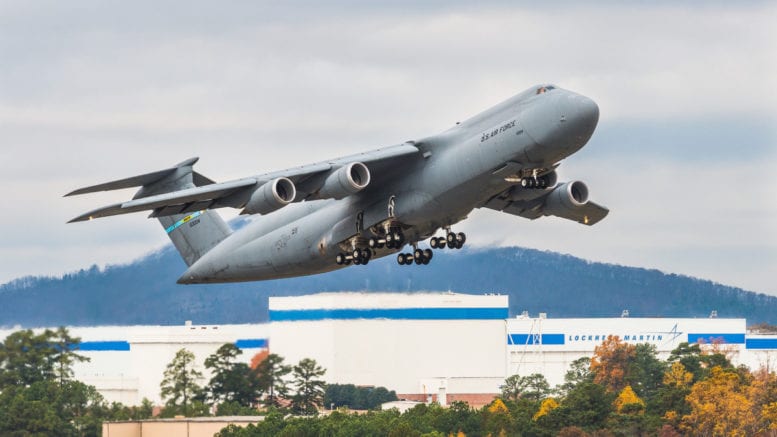 The 13th C-5M Super Galaxy takes off for delivery from Marietta, Ga. to Dover Air Force Base on Nov. 21, 2013 (photo courtesy of Lockheed Martin)

According to a press release about the celebration, the C-5 Galaxy strategic transport has been operated solely by the U.S. Air Force since 1970. All production C-5s were built in Marietta. The first C-5A left the Marietta facility on March 2, 1968, with U.S. President Lyndon Johnson in attendance. The first flight of a C-5A was on June 30, 1968.

The press release states, “The C-5 is the largest aircraft in the U.S. Air Force inventory and is capable of carrying two 78-ton M1A1 main battle tanks or helicopters and other large equipment intercontinental distances. Fully loaded, a C-5 has a gross weight of more than 800,000 pounds.”

Lockheed Martin received an Air Force contract to modernize 52 C-5 Galaxy.  It was part of the U.S. Air Force’s Reliability Enhancement and Re-engining Program (RERP).  RERP, announced in 2015, involves an extensive rebuilding and modernization of the craft, including engine replacement.

According to the press release for the anniversary celebration, “The C-5 RERP incorporates 70+ improvements and extends the aircraft’s service life to at least 2045. C‑5M modernization provides greatly improved reliability, efficiency, maintainability and availability while ensuring this critical national strategic airlift resource continues serving the warfighter well into the 21st century.”

The final RERP C-5 was on display at the ceremony and will be delivered to the 439th Airlift Wing, the Air Force Reserve Command unit at Westover Air Reserve Base, Massachusetts. There are also C-5Ms at Dover Air Force Base, Travis Air Force Base and Joint Base San Antonio-Lackland.

Lockheed Martin is one of the largest employers in Cobb County.

>> For more of our coverage on the company, follow this link.

Resurfacing starts on Polk Street and Kennesaw Ave in Marietta

An evening of Romantic Valentine’s jazz with GSO Jazz!