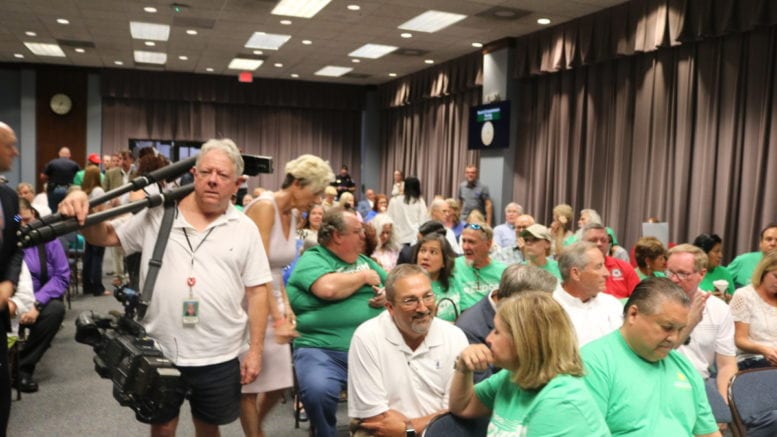 This is an editorial statement rather than news, so make of it what you will.

Supporters of the increase were obviously well organized and included police representatives, library and parks advocates, and supporters of the county extension service and animal services.  The opponents included Americans for Prosperity, and possibly the Cobb Republican Party (although the resolution from the Cobb GOP was ambiguous and made no direct request to the board about the millage rate).

I initially came up with 27 yes, 14 no, and five question marks, and wrote, “Speakers in favor of the millage rate increase outnumbered opponents by nearly two to one.”

A local anti-increase activist, basing his argument on a TV news report that called the crowd evenly balanced, said that the difference was 2 speakers +/- in either direction.  Neither the TV news crew nor the activist provided an actual count. Since the video is online, I rewatched and recounted, taking down the timestamps, the name of the speaker as best I could spell it from their self-introduction, and whether they stated a “yes” or “no” preference.

Here’s what I posted on a local Facebook group in response to the anti-tax activist:

If I make the assumption that anyone expressing discomfort, or asking for a forensic audit is in the no column, and anyone asking that services not be cut is in the yes column

One comment was a clear question voicing no opinion.

So if I go by what I think people might have meant, instead of what they said, the numbers could look like this:

I generally prefer to go by what someone states they want to happen.

This isn’t a sufficient shift for me to retract.”

While it isn’t a reason for a retraction, it is sufficient cause for clarification, so I’m changing the line to “Supporters of the increase significantly outnumbered opponents.” and inserting a link to this op-ed.

Now in the grand scheme of things the breakdown of 46 people testifying at a hearing isn’t reflective of whether residents of Cobb overall want a tax increase (conduct a poll anywhere that asks “Do you want to be charged more money” about anything, and you’re likely to get a negative vote).  And it also isn’t reflective of the need (or lack of need) for the increase.

But the breakdown for and against was pretty easy to count, although a little tedious, and since it’s on video, claiming that the balance was even is a bit silly.

If you want to check my count for yourself, the video of the hearing is embedded below:

Adoption of Cobb budget and millage rate on Tuesday