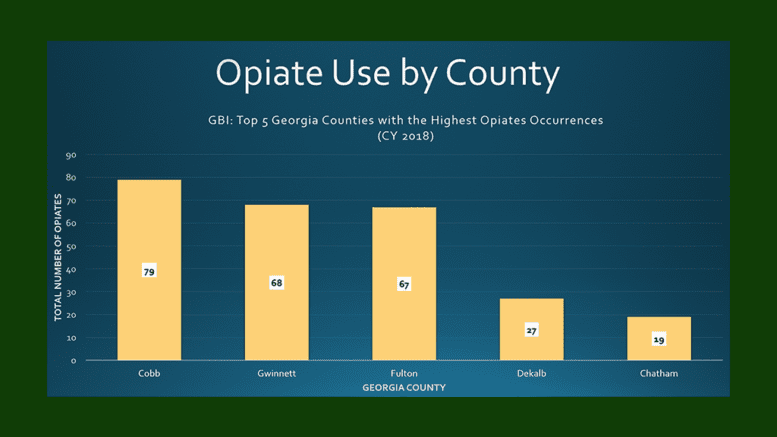 In a press release this morning, the Georgia Bureau of Investigation’s crime lab announced that Cobb County was at the top of the list for opioid use in Georgia. The top five on the list were

[Editor’s note: the text of the press release puts Fulton in the number two position but the accompanying chart puts Gwinnett one seizure higher than Fulton.  The GBI public information officer is checking on it, and we’ll update when we get an answer.]

According to the press release, the ranking on the list is compiled from law enforcement seizures tested by the Crime Lab. The GBI Crime Lab does not test every item submitted by law enforcement officers and does not routinely test marijuana.

The press release states, “This data was collected on May 22, 2018 and is subject to change as additional cases are tested by the lab. The data represents 3,954 drug cases submitted to our crime lab by law enforcement agencies.”

The report also includes this summary:

The website for the GBI’s Division of Forensic Sciences, which runs the drug crime lab, states:

The primary function of the Chemistry Section is to analyze items of evidence in order to determine the presence or absence of controlled substances.  Chemists provide expert testimony to the courts, supply the courts and other state agencies with factual drug information, and provide information to the general public and news media about drug abuse.  Additionally, a team of scientists is trained to assist police officers in clandestine laboratory seizures.