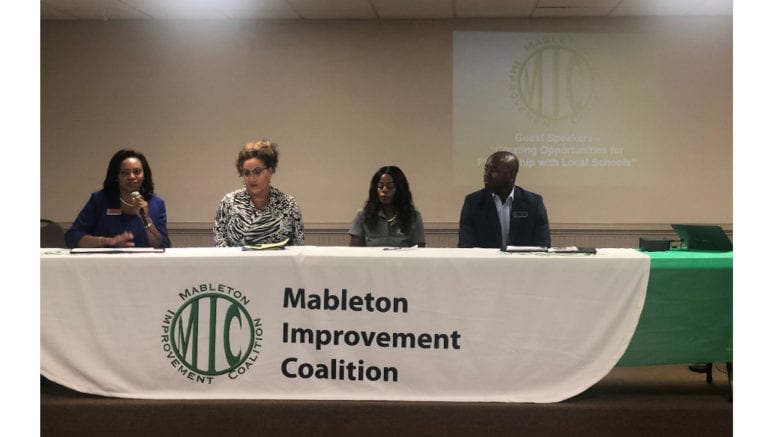 The focus of the meeting was to develop a partnership with parents and community members by encouraging more school involvement through volunteerism and communication.

MIC’s education chair, Nate Smith, said education is a priority within MIC and the goal of the forum is to change the narrative of how South Cobb schools are viewed.

Attendee, Pearline Cole, whose children attended schools in South Cobb, has a grandson in the South Cobb schools. She said this was her first time attending a meeting, but she heard school principals were going to be attending and wanted to ensure she made it a priority to be at the forum to represent her grandson because she was involved when her children were in school.

“ I came to the meeting because I wanted to see and hear all the principals,” said Cole. “ I want to be involved in my grandson’s education.”

The meeting started with the principals from South Cobb High School, Pebblebrook High School, Lindley Sixth Grade Academy and Floyd Middle School, giving brief introductions of themselves and the schools they represented. Following the brief introduction the attendees were broken down into smaller groups to have a direct conversation with the group’s assigned principal. The forum concluded with the attendees reassembling and sharing a recap of what each group discussed.

One of the biggest applauses came when Jo Lahmon, the South Cobb Regional Manager for the Cobb library system, announced the use of PASS accounts, a “passport for student success.”

Smith said these types of meetings might not be every quarter, but there will be some sort of function to highlight what is going on in the school system.

For information on how you can get involved in your community schools, contact them directly by visiting http://www.cobbk12.org/.

For more information on how to get involved with MIC by volunteering on one of the committees visit https://www.mableton.org/.