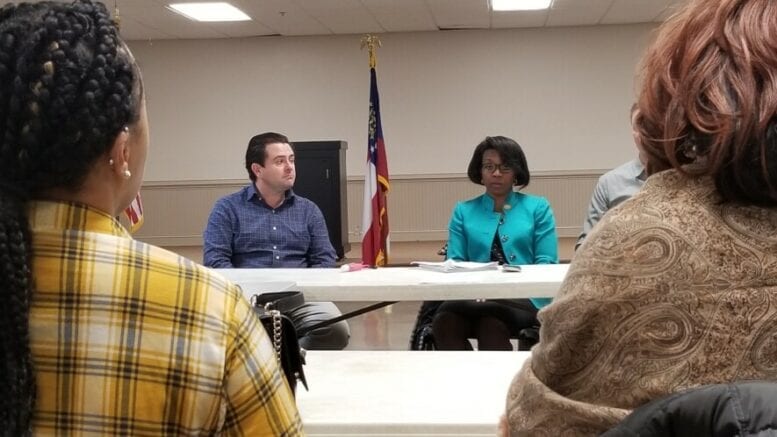 A meeting took place Wednesday evening between Ryan Teague, who is the owner of Baldwin Paving , and a group of residential neighbors of Baldwin’s facility on Sanders Road.

Neighbors have complained of dust, noise and the removal of trees at the facility, which is on Sanders Road south of Flint Hill Road, near the Silver Comet Trail.

The property, leased by Baldwin Paving, is owned by the family of Georgia state Senator Lindsey Tippins (R-District 37).

Tippins intervened in a contentious Cobb County Board of Commissioners meeting in November of 2019. At that meeting Baldwin Paving was allowed to withdraw a Special Land Use Permit (SLUP) without prejudice, over the objections of Commissioner Lisa Cupid, who represents the district where the property is located.

Cupid wanted the neighbors to be given a chance to speak at the BOC meeting.

Withdrawal without prejudice means that Baldwin Paving can resubmit the application at any time.

Ryan Teague, the owner of Baldwin Paving, said to the assembled neighbors at Wednesday’s meeting, “I’ll be the first to say that I was unhappy with the way we handled it.  I should have been here before now, and I apologize for not already having been here.”

“We have a land disturbance permit just for moving dirt on the site,” he said. “But concrete crushing, we hadn’t done it many times, and it was just dropping the ball on our part to not know that we needed to have some kind of special permit for crushing concrete.”

Teague said that since the site is zoned heavy industrial, if Baldwin Paving leaves, another intensive use is likely to come in.

“I would encourage you to try to work with us if you can.”

Cupid said that she too moved next to a heavy industrial area, so she understood the concerns of the neighbors.

“I’m open to how we manage that in a different way,” said Teague. “We’re not a concrete crushing company.  We build roads.  This is not a major portion of what we do. So if it’s the right decision to not crush concrete out there,  not a problem.”

“But what I do have a problem with, is we have a land disturbance permit there, we can bring dirt as it relates to Cobb County jobs,” he said.

Teague said Baldwin would have conversations with the community and figure out the least disruptive way to work.

Anita Payne, one of the neighbors at the table, said “We understand that, but concrete crushing can be moved off the table, because .that’s what concerns all of us here.”

She asked what Baldwin Paving intended to do on the site, assuming that concrete crushing was off the table.

Teague said that the site would continue to be used to store dirt.

Payne asked how many trucks would be estimated to come in and out of the site per day, and what hours they would be doing it.

Teague said it was hard to predict, and depended on the jobs in progress.

Suggestions brought up by the neighbors of the site included the possibility of moving the operation elsewhere, replacing the tree buffer that had been removed during the land disturbance, and building barrier walls against the noise.

Ray Thomas, Chairman of the Board of the Mableton Improvement Coalition, said that a forum on code enforcement and zoning was to take place the following night in the same South Cobb Community Center room, “Because these are the things that we have to learn as a community. How to protect ourselves.”

“Sir I appreciate you coming here tonight,” Thomas said to Teague, “and (to) hear your apology. Hopefully you’ll follow through with the things that you’re saying.”

He said the community would need to unite and hold the company accountable.

Trina Joseph, describing the sudden removal of trees from the property, said, “One day, we start hearing this noise. We start seeing all of this stuff coming on board, and we’re like ‘what is this’? We never saw a zoning or a meeting sign until we started talking amongst ourselves, taking videos, and contacting Commissioner Cupid. So it literally happened overnight.”

“We are a close community,” she said. “We have neighborhood meetings once a month.  We clean Sanders.  So that’s how quickly it happened.”

Teague agreed to meet with the community the following Saturday morning on a street adjacent to the site, and do a walk-through of the property and to listen to the concerns of the neighbors.