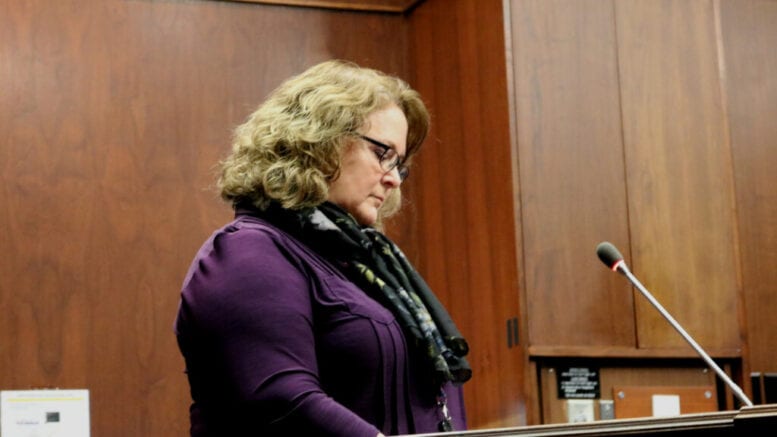 Janine Eveler, the director of the Cobb County Board of Elections and Registration speaks on the new voting precincts (photo by Larry Felton Johnson)

At Tuesday morning’s meeting of the Cobb County Board of Commissioners proposals to create three new voting precincts were approved 4-1, with District 4 Commissioner Lisa Cupid opposing the motions.

The vote resulted in the splitting three existing precincts.

Smyrna 3A was split to form Smyrna 3B. See new map here.

During the public comment section before the meeting, Jacquelyn Bettadapur, chair of the Cobb County Democratic Committee, and a resident of District 2, opposed the changes.

“Election year 2020 is projected to have unprecedented turnout,” Bettadapur said. “There are significant increases in voter registration. On top of all that we are rolling out new voting systems.”

“Limited in-person early voting access … and now precinct changes are before you for approval this morning,” she said. “Short notice, just under-the-wire precinct changes that will impact 43,258 voters two months before a major election. This has the makings of a perfect storm.”

The proposal was moved off the consent agenda and onto the regular agenda for full discussion at the request of Commissioner Lisa Cupid.

Janine Eveler, Director of the Cobb County Board of Elections and Registration, said that increasing the number of precincts was necessary at this point.

“We have several precincts that are quite large, and we have been looking at dividing those so that especially with the new system coming in, we can serve a smaller number of voters at each of the facilities,” she said.

“These three were on our plate to divide earlier in 2019, but one being in Smyrna and Smyrna having a runoff in December, it bumped us down here to the January meeting,” she said.

“We now have over half a million active registered voters in Cobb, and we in the past have been reducing the number of precincts because of efficiencies, and the existing system was running smoothly and so we were able to reduce some precincts in the past,” Eveler said. “We’re now at a point where our number of voters, and with the new system coming in, it is advisable … to begin to grow the number of precincts that we have.”

She said it would be a challenge to staff the new locations, but that it would be necessary to reduce the number of people who show up at each location on election day.

District 2 Commissioner Bob Ott said, “Jeanine, two of the things that we heard about, was long lines, so part of the reason that you’re doing this is to reduce the lines because you’re dividing up the precinct into two so that people won’t have to wait in line as long.”

“And the other thing someone can say, ‘Oh, well you know now, somebody comes to 3A, who has to go to 3B.’  Well it’s still in the same precinct footprint.  It’s just adding a second location, so it’s not like somebody’s going to have to drive clear across the county, or clear across the City of Smyrna to get to those locations.”

District 4 Commissioner Lisa Cupid, who cast the sole vote against the new precincts, said, “I’m hearing that the premise for these agenda items has to do with these being large precincts.  Has there ever been complaint at these precincts?”

Eveler said, “We get complaints at all of our precincts for various things.”.

Cupid said, “Okay, let me be more specific, then.  What has the voter turnout been at these precincts?”

Cupid said, “And I say this because there are some precincts that have very little turnout, even though they may have a larger voter pool. So I’m trying to understand if just looking at the aggregate number of voter versus actual turnout over time is going to have more detrimental impact than what is realistically the case.”

“For me to support this agenda item I would like to know more than just what is the number of active voters, but what has been the actual voter turnout,” said Cupid.

Motions were made to split each of the three precincts, and the vote on each was 4-1, with Cupid voting in opposition.

Cobb Board of Commissioners to consider resolution condemning racism