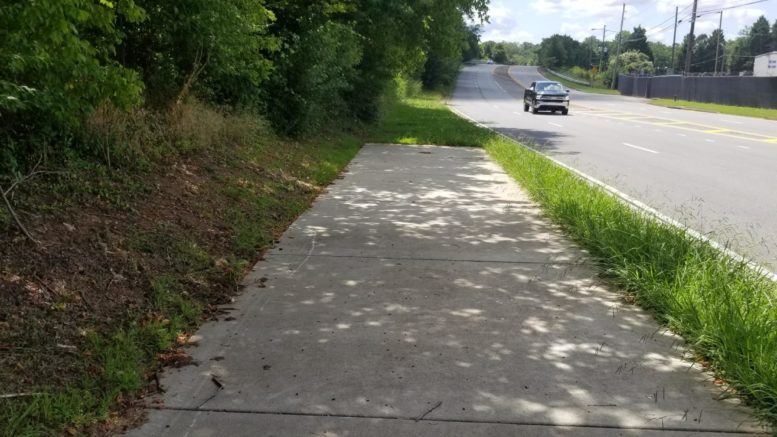 The abrupt break in the Mountain to River Trail at West Atlanta Street and Pearl Street (photo by Larry Felton Johnson).

When the Mountain to River Trail is completed it will be possible to cycle (or walk or run if you have that much time and stamina) from the Chattahoochee River National Recreation Area near the Cumberland Community Improvement District to Kennesaw Mountain.

The trail is an important part of trail and greenway connectivity in the county, and its relationship to other trails in the county is described in the Cobb County Greenways and Trails Master Plan as follows:

Existing trails follow two primary spines: the Mountain to River Trail which travels from Kennesaw Mountain to the Chattahoochee River in the Cumberland area, along Atlanta Rd; and the Silver Comet Trail from the Alabama state line to East-West Connector, where it then connects into Cumberland and eventually, is proposed to cross over the river into Fulton County. The Noonday Creek Trail is connected to the Mountain to River Trail at the north end, connecting Kennesaw Mountain to Town Center and KSU, and will eventually continue north into Cherokee County

The trail is nearly complete, but has a gap on West Atlanta Street between Marietta and Fair Oaks.

Smyrna resident Kevin Williamson brought the missing segment of the Mountain to River Trail to the attention of the Courier in a comment to the website.

The word from the county

Cobb County Communications Director Ross Cavitt responded in an email to the Courier, outlining the current plan for completion of the trail:

“This segment is in design currently as a 2016 SPLOST Project,” Cavitt wrote. “The project fills the gap in the trail on the east side of West Atlanta Street from approximately Dunn Ave to Pearl Street. The project is scheduled to let for construction in October 2021 with construction likely beginning in early 2022.”

Lease between state of Georgia and CSX includes 2.3 miles for Silver Comet Extension