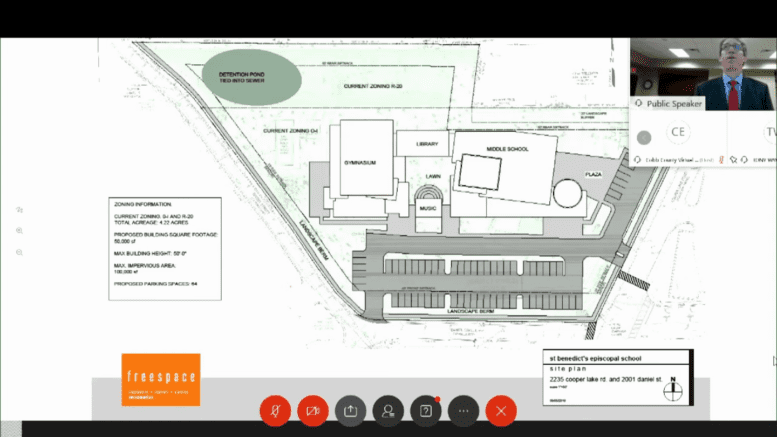 The Cobb County Planning Commission at Tuesday’s zoning hearing voted 4-0 to recommend denial on a rezoning request from St. Benedict’s School for the purpose of expanding grades 5-8 for the existing Episcopal private school.

Tony Waybright, the commissioner representing the area where the property is located, recused himself from hearing the case.

The property is located at the intersection of Cooper Lake Road and Daniel Street, and was heard as two related zoning cases, Z-76-2019, and SLUP-17-2019.

St. Benedict’s acquired a little over four acres of land near their existing school and made plans to build three three-story buildings that would accomodate 250 middle-school students, to include a library, a music room and a gym.

“They have been … virtually across the street from this property since 2009, operating what is now a very successful Episcopal school and have been a wonderful part of this community,” Moore said.

He said the current plan proposes three access points to the property: two on Cooper Lake Road and one on Daniel Street.

“I think it’s also important to note that we always talk about traffic impact, So here you have a pretty unique instance of why we believe this is a very positive application and proposal … because you already have this existing traffic … Existing school traffic comes to these exact roads,” Moore said. “It comes to this almost exact location on a daily basis during normal school times.”

“So all we’re doing is moving it to this site. We think that again, it’s a positive part of this application, because any other use is going to bring new traffic, not existing. That’s a very positive thing,” he said.

Moore said that St. Benedict’s has a carpool plan that will involve access from Cooper Lake Road.

“The good thing we have here is it is St. Benedict’s, so they do this regularly now for their middle school and they know exactly how their carpools work, the timing of it, how many they need to stack at any point at any given time,” Moore said.

Mary Rose Barnes of the Oakdale Community Association spoke in opposition to the plan.

“This application needs to be denied and finally put to rest,” she said. “Since the application of last year, we’ve had very little information from the applicant other than the carpool plan.”

“It does not meet Cobb standards,” Barnes said. “There has been no stipulation letter, nor any request for community meetings.”

“During the seemingly countless continuations, we’ve had to rely on (Cobb County Zoning Manager) Mr. (John) Pederson to find out if there will be continued each month. We just we just recently informed that it would finally come up.”

“We understand St. Benedict’s need to expand. We knew from the very beginning, they if they should succeed, they would have to have additional property,” Barnes said. “However, approval of this overreaching proposal would result in a major disaster for Oakdale.”

Andy Smith, a former planning commissioner for the area, and currently a candidate for the Cobb Board of Commissioners for District 2, asked to speak virtually on the issue.

“Well, I just wanted to say that I agree that St. Benedict’s has been a beneficial partner with this community,” he said. “What I hope to do is help make sure this is how it stays.”

“I believe that the circulation plan will be detrimental to the businesses and neighbors in close proximity. And all who use Daniel Street to access Atlanta Road. I believe this requires further study. There has not been enough involvement with the community since I was on the Planning Commission back in March. And I will and I ask that respectfully ask that this case be held.”

Planning Commissioner Alice Summerour said, ” I have attended the zoom meeting that was held recently and this particular zoning was brought up. And I don’t believe there’s been enough neighborhood input into the transportation issues that have been brought up.”

“And although the neighborhood was largely in favor of this school, and I had hoped this zoning would work out, she said. “But the applicant can’t meet the DOT recommendations. So I have to make a motion to deny Z-76 and SLUP 17.”

The motion to recommend denial passed 4-0, so the application now goes to the Cobb County Board of Commissioners for a final decision.