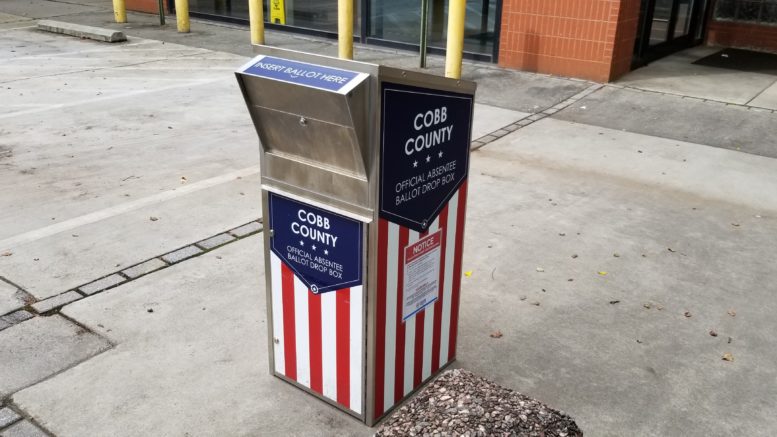 On Thursday August 6 an incident occurred at the Riverside EpiCenter between Cobb County Board of Commissioners District 4 candidate Shelia Edwards and Amber Summerhill, a supporter of Edwards’ opponent Monique Sheffield.

The incident resulted in the filing of a police report, and the two parties gave conflicting accounts of what happened.

The Cobb County police officer who took statements wrote the following in the intial incident report:

I was dispatched to 135 Riverside Parkway in reference to a domestic dispute between Shelia Edwards and Amber Summerhill. I spoke to
Edwards first who advised that she was campaigning and minding her own business when the lady, Summerhill, came over encroaching
on her space and put her sign in her face hitting her in the face, so she pushed it away.

She said Summerhill started saying that Edwards punched her but Edwards stated she never punched her she just pushed the sign out of her face after she was hit with it.

I talked to Summerhill who said she was on the sidewalk by the roadway on the same side as Edwards. She said they have been out there since 0700 hours and Edwards came out at about 0900 and set up on the same side they were on. She stated she was just holding her sign and Edwards started videotaping her and she said she was talking to her son about respecting elders and if you give respect you get respect.

Summerhill said Edwards started yelling to her son dont listen to your mother she dont know what she is talking about.

Summerhill stated she just went on about campaign for Sheffield and Edwards started telling her she was getting to close to her stuff and
blocking her sign.

Summerhill stated that Edwards punched the sign she was holding and hit her in her face.

Summerhill stated she never put the sign in Edwards face and never hit her. She said she might not have been social distancing but never hit Edwards.

I talked to Summerhill`s cousin Brandt Scotti who stated he left the area to get food and as he was walking back he saw Edwards push the
sign then punch Summerhill.

I talked to Kevin Kitchens, who was a friend of the family for Summerhill and Scotti, who said he was driving through and saw Edwards
and Summerhill hit each other but did not know who started it.

I saw no marks on Summerhill or Edwards and because of conflicting statements from both parties and unbiased witness I advised both
parties of warrant procedures and gave them a case number.

The Courier spoke with both Amber Summerhill and Shelia Edwards and asked them to tell what happened.

“Shelia Edwards is a bully. She really bullied me from the morning time that I got there up until the incident that … unfolded,” Summerhill said.

“I went to endorse Monique and campaign for her on Thursday morning,” she said. “I was asked by my uncle to volunteer … So I brought my 10 year old son along with me for help, as well as … for political lessons and other things.”

“And so we got over to the EpiCenter at about seven o’clock on Thursday, set up shop … and got ready to campaign for Monique at about 7:20.”

“I set up a sign that my uncle provided from Monique and … I had to hold it, me and my son were holding it. So, at approximately 9:30-ish Shelia Edwards comes to the site … to the EpiCenter, and she gets out of her car, and she approaches me and tells me that I’m standing in front of her sign,” Summerhill said. “And I told her that I wasn’t. But she took the sign out of my hand, the part of the sign that I was holding, and proceeded to make me move.”

“So just to not be confrontational or cause any issue, especially in front of my son. I just let her do it,” Summerhill said. “I just let her move me out of my spot, even though I wasn’t in front of her sign.”

“He actually had his girlfriend and her daughter with him. But he quickly introduced us. We were just talking, chit-chatting it up,” she said. “… while we’re holding the sign. We’re outside on the sidewalk over there, the entryway of the Georgia EpiCenter. So we’re holding the signs, we’re talking, and he asked me ‘Weren’t you in a different spot earlier this morning when I came by?'”

“I guess she heard us talking about …what happened earlier. And so she started recording us and we noticed it, but we continued on talking,” she said. “And my cousin and his girlfriend and their daughter, they went on across to the inside of the EpiCenter, across the parking lot to go get the food and the things that they came up there for initially.”

“And so, me and my son were left there to hold a sign like we’re supposed to be doing … and Shelia still was recording,” Summerhill said. “And so at this point, I looked at my son and I’m talking to him just telling him … ‘First of all, you have to give respect to get it’.”

“‘I just want to let you know that this is an older woman right here. But this is not how you behave’,” Summerhill said. “And you know, the only reason why mommy’s not like, going back and forth with this lady (is) I don’t want a confrontation with her … but you don’t ever let nobody push you around’.”

“So while I was speaking with him she started yelling, from the same distance: ‘Don’t listen to your mama … She’s crazy. She doesn’t know what she’s talking about.'”

“I mean, like really belligerent … and yelling at my 10 year old son and me at the same time. Okay, so at that point, I was like, ‘Oh, no, that’s what we’re not gonna do’. So, I was telling her to be quiet … she will not talk to my son … she will not talk to me like that, like, completely like, trippin’ now, like she really needs to get a hold of herself, because we’re out here to volunteer …”

“And so … she’s talking at me as I’m walking back and forth. She’s talking at me from … the sidewalk as well. But she’s behind me. And so I try to ignore her. (I turned) around because she said something that I guess touched a nerve with me,” Summerhill said. “I turned around and I was met with a ‘Boom’ like a punch through the sign that I was holding into my face and I’m like ‘Oh my God! Are you kidding me?'”

She said her cousin, who was walking toward them across the parking lot, shouted toward them, and a few minutes later, Summerhill said, both Edwards and Summerhill’s cousin phoned the police.

“Well, I mean, it’s essentially what I shared with the officers,” Edwards said. She said she was waiting for her supporters to arrive when the incident began.

“I arrived, and they (Sheffield’s supporters) had their sign in front of my sign and I asked them to move.”

“She was on one side, I was on the other when my folks left. I was waiting for my second team to come in,” Edwards said. “They were a little late, and whoever this person is that went to get her food … they were saying a bunch of negative stuff about me, and saying it in a taunting manner, you know … trying to get a reaction from me, and I just ignored him.”

“I went, got my music and I started playing my music to kind of drown them out,” she said. “She (Summerhill) started saying some negative stuff to her son about me, and I told him, ‘Don’t listen to your Mom, don’t listen to your mom’, I said, ‘You have to be a better person.'”

“I would never say anything negative to a child … but I just told him don’t support whatever his mother was saying,” Edwards said.

“And she referenced the fact that I had moved their sign up in front of my sign earlier, and that she should have done something to me … She came over with a sign and she put it in my face,” Edwards said.

“I guess she probably didn’t mean to hit me but she hit me in the nose, because she had the sign so close to my face,” she said. “I said ‘You’re not going to hit me with that sign’.”

“And I proceeded to call law enforcement, because I was out there by myself,” she said. “So I feared for my own safety.”

“I can’t say that I was injured by her hitting me in the nose with the sign,” she said. “But obviously, you don’t want anybody doing that to you in an intimidating manner.”

She said that shortly thereafter supporters of Sheffield showed up, and the area became what she described as a “mob scene.”

“Erica Thomas, supposed State Representative Erica Thomas, who is notorious for chasing citizens around Publix and accosting lawmakers at the Capitol, decides she’s going to show up,” Edwards said.

“She comes over and puts a phone in my face, and asks ‘Why did you punch this woman?’ and I’m like, ‘You better get out of my face!'” Edwards said.

“That’s when the police officer came and told her to leave me alone and move back to the other side of the street,” she said. “And my opponent showed up. I mean, it was just a crazy situation in terms of all the people that they called for little old me, who was by myself.”

Cobb Commission District 2 election results: a look at the precincts