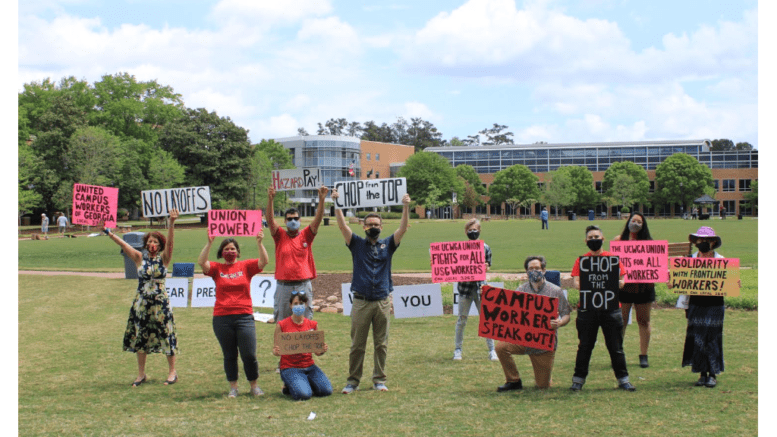 KSU’s union gave the university a failing grade at protecting students and employees during the pandemic, among other issues. (photo by Arielle Robinson)

Kennesaw State University’s chapter of the United Campus Workers of Georgia union says the university continues to fail at looking after its students and employees.

There, KSU UCWGA issued a report grading the university’s respect for workers and students, transparency, handling of the pandemic and racial and gender justice.

The union gave KSU an F in each category.

KSU professor and UCWGA member Dr. Heather Pincock said the report card’s intention is to present a more accurate picture of what life has been like for KSU workers and students.

“We thought it would be fair for us to evaluate our employer and to kind of turn the tables around and say how we think KSU did this year,” Pincock said. “Especially because there’s been a lot of messaging from the administration about how successful the year was, and we don’t feel that really reflects what the experience of a lot of workers has been.”

The union says that since KSU shut down due to the pandemic, university administration transitioned to online learning without consulting students and employees about their desires.

KSU UCWGA also criticized the university for laying off workers amid an uncontrolled pandemic.

The union said the layoffs were discriminatory toward older people and women working at KSU.

According to the pamphlet the union distributed Thursday, over 75 percent of the initial round of workers the university laid off were women while more than 80 percent were over the age of 40.

With regard to race, since 2020, employment numbers have risen at KSU but the number of Black workers lessened, according to the union.

Black workers at KSU also make up a large portion of the lowest-paid jobs, the union said.

Additionally, the union says that the university’s treatment of part-time workers is abysmal.

KSU UCWGA says that despite nearly half of KSU faculty being part-time workers and some of them working for decades, they are treated differently than full-time faculty.

According to KSU UCWGA, KSU did not renew many part-time faculty’s contracts in the Spring 2021 semester. This leaves the futures of many part-time university workers hanging in question.

The union also said the university had a poor response to handling COVID-19.

KSU initially closed and transitioned to remote learning in March 2020.

The next month, KSU President Dr. Pamela Whitten announced a Presidential Task Force comprised of her and other KSU administrative officials and professors.

The intent was to figure out how to best deliver classes throughout the pandemic.

“Decisions about when to open campus and how to do so were made based on political pressure instead of real concern for our students and workers,” according to the union pamphlet.

They say that pressure came from the University System of Georgia and Governor Brian Kemp.

Another issue the union said they were concerned about was that KSU gave faculty and students only three days to transition to remote learning.

This is contrasted with other schools, like Emory University and the University of Georgia, which had at least a week to transition.

The pandemic response also brought along a lack of transparency, union members described.

“KSU denied repeated requests for a COVID-19 dashboard, deciding instead to provide weekly case counts buried in a hard to find FAQ,” the pamphlet said.

(The number of COVID-19 cases at KSU is at the bottom of the FAQ page).

In unexpected news, Whitten announced this month that she is stepping down to become president at Indiana University.

KSU Provost Dr. Kathy Schwaig and a member of Whitten’s task force will be acting as interim president in the meantime.

In a blog post sent out to KSU students, faculty and staff, Whitten also announced that the university intends to fully return to in-person operations for the Fall 2021 semester.

Despite these transitions, the union says that the university must improve its response to the pandemic and university worker’s rights — no matter who is in charge.

“Our students struggle to work and go to school at the same time, and then they still find themselves in debt,” Giordano said. “University business as usual means that Black workers are segregated into the lowest-paid jobs in the university…University business as usual means that the number of high-paid administrators continues to grow while our salaries stay the same year after year.”

Giordano said that KSU did not need to lay off workers or seek extra money for students taking face-to-face classes during the pandemic.

Part-time KSU Professor and UCWGA member Stephen Watson said that part-time faculty should have received the $1,000 emergency relief bonus that was given to other Georgia educators, among other necessities.

“We want health insurance, we want a change in the perception of part-time faculty members,” Watson said. “For many of us, this is our full-time job. We create value for this university and deliver the experience that students and their parents expect.”

After the rally, Pincock said that with incoming interim president Schwaig, there may be a chance to reverse what the union says are failures by the current presidential administration.

“It really is an opportunity for [Schwaig] and everyone who should follow her as the next president of KSU to do the right thing and really change course,” Pincock said.

The Courier reached out to Kennesaw State University for comment, and they did not respond as of the deadline for this article.