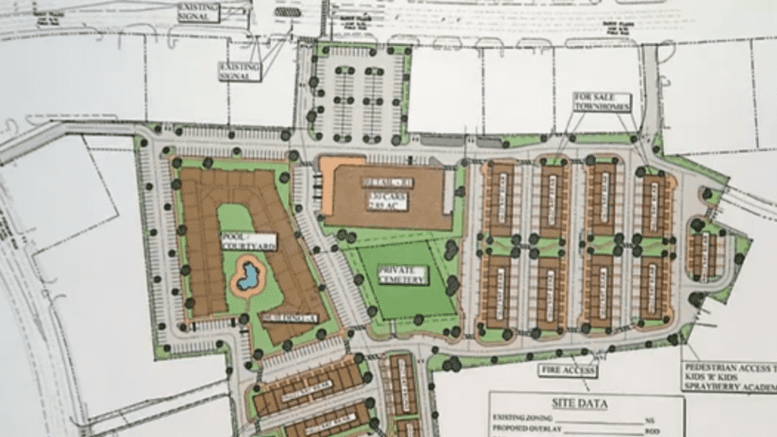 Developer Atlantic Realty made last minute changes from the site plan submitted last week by removing four townhomes to create the green spaces between the senior living buildings seen in the right half of the rendering. (screenshot from video of meeting)

Despite more changes being made to the redevelopment site plan at Sprayberry Crossing, the Cobb Planning Commission voted 5-0 to delay its decision again until June.

The developer Atlantic Realty dropped plans for a 125-unit apartment building in response to opposition in the community. The revised plan, submitted last week, added 62 more for-sale townhomes to the 44 in the previous plan, however, by the time it was presented to the Planning Commission Tuesday, Atlantic had removed four townhomes, taking the total down to 102. The new plan also removed a building that was dedicated to retail and it eliminated the public green space.

Kevin Moore, the attorney for Atlantic, appeared frustrated during his presentation, referring to the opposition as having a “mob mentality.”

“The number one criticism, the number one concern [is apartments],” he said. “In fact, one of the opposition groups, who is still apparently going to speak in opposition, the name of their group is opposed to multi-family apartments…It’s been removed.”

Access to the development has been an ongoing issue as the site is set behind other businesses that line Sandy Plains Road and Post Oak Tritt. Cobb DOT previously recommended restricting the exit point on Post Oak Tritt to right-turn only due to the number of left-hand-turn crashes, but that drew opposition from the neighboring businesses. Atlantic then created a separate enter-only access point.

Drew Raessler of Cobb DOT said he had concerns about the signalization of Kinjac Road. A previous version of the plans included a signal, but was removed after the DOT provided feedback. The latest site plan has restored the signal.

“Because that would be offset, it doesn’t line up with Kinjac, that means it would have to operate split face, where the Kinjac side goes, stops, then the development side goes, stops,” Raessler said. “Additionally, the width of that intersection has increased over what it is currently. Anytime an intersection is increased, it adds more time to that signal phase that has to be dead time – where you have the yellow phase and the red phase to make sure that traffic has fully cleared.”

Maureen Rittner introduced herself as “part of the mob” and was met with chuckles from the audience. She is concerned about the effect on traffic because she lives nearby.

“My concern is mostly safety,” she said. “If anything, I ask you to either hold or to deny this without any kind of clear traffic consideration.”

Planning Commissioner Deborah Dance recommended holding the decision, asking the developer to submit an updated traffic plan, a modified site plan addressing those issues, and to consider adding back green space. She also asked the developer to meet with the district and planning commissioners for the area, as well as two community representatives from the support and opposition camps.

Chairman Galt Porter added that he was concerned about the four-story senior living complex and questioned the amount and location of the parking.

“The overall access to this site continues to concern me,” Planning Commissioner Tony Waybright said, comparing it to another commercial site at Sandy Plains, State Route 92 and Mabry Road. That site is another aging shopping center with similar issues in that it is surrounded by major roads with access limited by medians.

“As long as access is restricted and limited to this site, I don’t see much future for a project with this kind of density, he said.”

We Thrive in Riverside gets $50k grant from Oprah Winfrey foundation