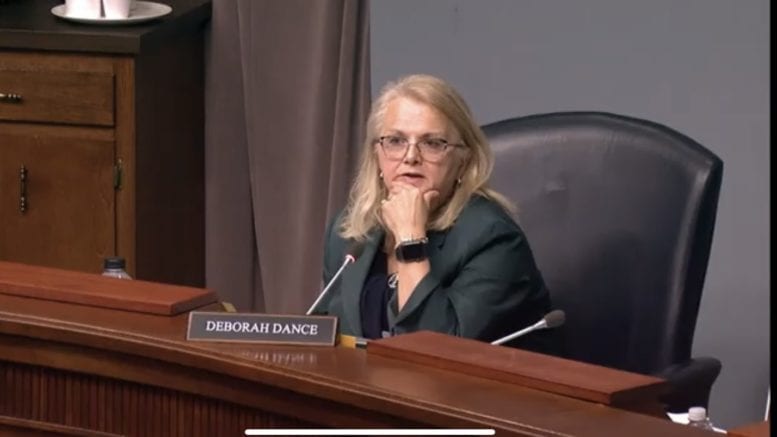 The decision on the Sprayberry Crossing shopping center redevelopment application has been put off for another month to the disappointment of community members who are split on the proposed mixed-use plan.

After months of continuances at the request of developer Atlantic Residential, the proposal for 2692 Sandy Plains Rd. finally went before the Cobb Planning Commission Tuesday. After about two hours of discussion, the commission voted to hold the decision until the May meeting.

The reaction to yet another delay in the two Facebook groups dedicated to the property was largely of frustration and questioning why county leadership keeps “kicking the can down the road.”

“The planning commission’s primary reason given for delaying a decision on the development was questions on the placement of traffic signals and turns on Sandy Plains. It’s important to note, the developer worked with the DOT on the egress plans for the development and there was consensus and cooperation on the proposed solutions. There was no reason for the county to not be aware of this,” Joe Glancy wrote in the Sprayberry Crossing Action Facebook group, in which he is an administrator. He has advocated for improvements to the blighted property since he and Shane Spink started the group in 2017.

Similarly, in the ROD-1 Residents Against Apartments at Sprayberry Crossing Facebook group, some members who oppose the current plan wrote they weren’t backing down.

Tim Carini addressed the commission in person regarding the developer’s request for a redevelopment overlay district, saying it was not appropriate for the area.

“Please don’t make us the guinea pig for this one-time use,” he asked them.

“I was very surprised they did not comment on the section of the ROD that says ‘must be adjacent to or in close proximity to an interstate.’ Obviously this property is not either, which should be grounds for an automatic denial as it does not conform to the code. We will hammer that point in the next hearing,” Carini told the Courier via email after the hearing.

The ROD was created in 2006, but removed from the code earlier this year. Sprayberry Crossing is the only development to try to use it as developers submitted the application before it was eliminated.

“Obviously traffic and blocking access to existing businesses is a big concern,” Carini said. “Our fear is the blight moves from the interior to the street-facing businesses, who may see a loss of patrons due to limiting access and traffic flow.”

Sally Platt, representing the board of directors for the nearby Autumn Lake neighborhood, spoke to the commission virtually. She said the redevelopment plan has support in her neighborhood and that many residents have watched the property decay for 25 years.

“We’re not simply saying anything is better than nothing. Rather, we believe that what we see is a well thought out development that may not be perfect in everyone’s eyes, but it’s a wonderful compromise,” Platt said.

“Ultimately, this is viewed as a short-term gain, long-term loss for the community,” he said. “All of the apartments are only going to attract transient, lower-income individuals by the hundreds which will not bring investment into the community. Instead I believe it will bring crime, drugs and other various problems all with them.”

Planning commissioner Deborah Dance cited new information coming in for her motion to hold the application to the May meeting. Commissioner Tony Waybright said he was concerned about the impact of the development on nearby businesses if access is restricted and wanted to hear that addressed at the next meeting. The vote to hold the decision was 5-0.