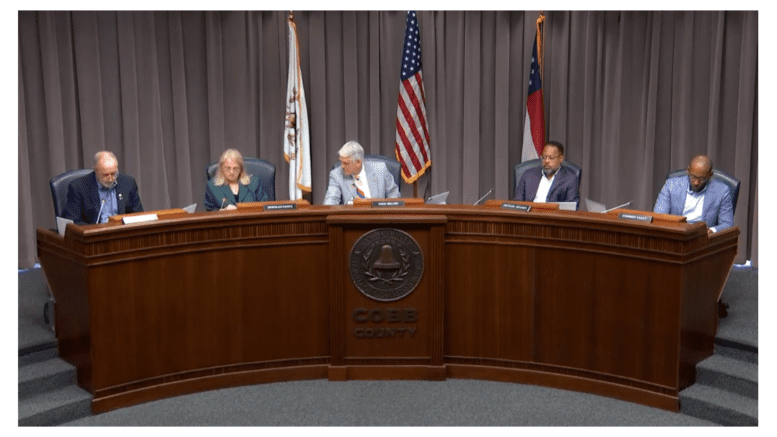 On a 4-1 vote and after months of back and forth, the Cobb County Planning Commission has recommended approval of a proposal to rezone just over 33 acres for a church and mixed-use development in East Cobb.

Commissioners gave the nod Tuesday to North Point Ministries’ proposal to build a campus at the intersection of Johnson Ferry and Shallowford Roads.  County documents outline that the development would also include up to 129 townhomes and single family detached homes, with a provision for restaurant/retail. Facets other than the church would be handled by a separate developer.

Commissioner Tony Waybright moved for approval after including a number of stipulations, including creation of a landscape committee, a pavilion, gazebo and benches and lighting along a walking trail through the project.

Another involved banning right turns coming out of the church for four hours on Sunday mornings to prevent help mitigate traffic surges through nearby neighborhoods.

“We are cognizant of that,” he said of traffic problems near the major intersection, “and we are looking at issues that we can add to that.”

Attorney for the church Kevin Moore presented updated information to commissioners, saying that maximum density for the residential portion of the project is at 5.82 units per acre. He argued that since the project was first proposed eight months ago, both the number of townhomes and the proposed density have been decreased.

Moore outlined that another change involves placing townhomes along the Johnson Ferry portion of the project instead of commercial outparcels, saying that the proposed design is “beautiful” and that the change should reduce traffic trips.

He argued that as restructured, the project is not out of character with the surrounding area, noting that a number of commercial businesses are on the opposite side of Johnson Ferry and that a nearby townhome development that is a transition to detached single-family residential was approved at six units per acre.

“This is not an isolated suburban neighborhood of single-family homes,” he said.  “At this intersection there is a mix of intensity and density both from a commercial and residential standpoint.”

Opposition speakers repeated objections that centered on both density and traffic issues, saying that the development would be out of sync with its surroundings.

“The biggest issue remains the intensity of the residential portion of the development,” said Jill Flamm of the East Cobb Civic Association. Speakers said the development would be too “urban.”

Flamm also said that key information has been lacking in the residential area, including lot size information and a “true” rendering of what the single-family home portion would look like.

Ruth Michels, a resident of the nearby MarLanta subdivision countered Moore by telling commissioners that “we are back before you for a fourth time without a significant change in the site plan from the July 6 planning commission meeting.”

“We want this area developed,” she said. “But it has to be the right kind of development.”

Michels blasted what she called a lack of transparency as well as a large number of requested variances for the residential portion. One speaker said they would run into the “hundreds.”

But Moore pushed back on the variance issue, saying that they came about in response to initial community opposition to facets of the townhome portion of the project.

“We regret we weren’t able to come to a full agreement with members of the community,” he said, “but that’s not been for a lack of effort and for a lack of trying.”

Responding to the density concerns, Commission Chair Fred Beloin offered an amendment limiting density to five units per acre. The motion was defeated 3-2. Beloin was the sole dissenting vote on the overall motion to advance the project to Cobb commissioners.

This would be the 8th location for Northpoint Ministries in metro Atlanta.

The proposal now goes to the Cobb County Board of Commissioners, which is scheduled to consider it Aug. 17.