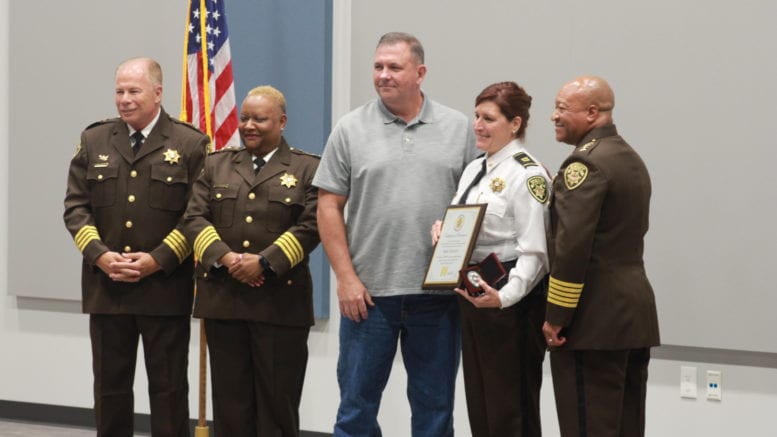 Cobb County Sheriff Craig Owens held a promotion ceremony Tuesday evening, where he announced that he would be reinstating the rank of captain at the sheriff’s department.

The ceremony took place at the Cobb County Police Department Training Center in Austell, where officers and their families watched as 15 deputies were promoted.

District Attorney Flynn Broady was also at the ceremony and briefly spoke to the audience about how he was grateful Owens invited him.

The sheriff promoted deputies to the ranks of sergeant, lieutenant and the newest rank — captain.

Four of the 15 deputies were promoted from lieutenant to captain.

Owens has also created a command coin that he, Chief Deputy Rhonda Anderson and Assistant Chief Deputy Michael Register presented to the captains.

The point of the coin is to symbolize the sheriff’s department’s values of innovation, service, partnership, trust and commitment and ensure that captains dedicate themselves to those values.

Command coins are only given to captains and the ranks above that, Register explained.

Most significantly, Owens presented the new captains with keys to a brand new vehicle.

Former Cobb Sheriff Neil Warren eliminated the rank of captain years ago while in office.

Owens, who has pledged massive changes to the Cobb sheriff’s office since being sworn in in January, decided that he would re-introduce the rank.

In particular, Owens said that he believes bringing back the rank will help improve operations in the office and the Cobb County Adult Detention Center.

“We’re putting more leadership at a higher ranking at the jail … so now we have some decision makers in place to make important decisions,” Owens said.

The sheriff said more leadership is needed and that his goal is to make the Cobb County Sheriff’s Office the best sheriff department not only in Georgia, but the entire country.