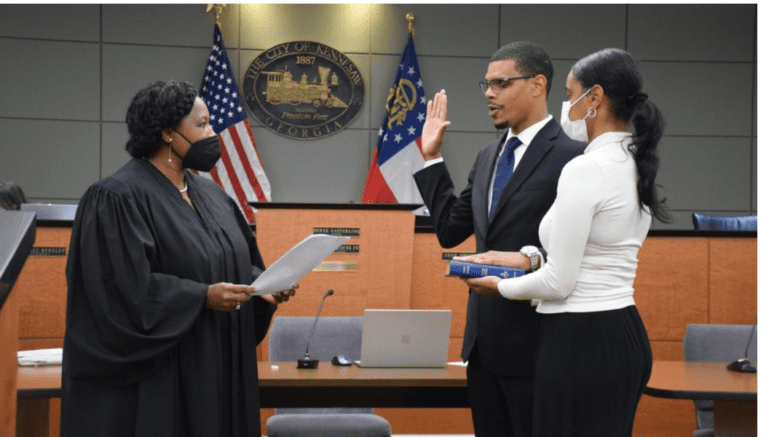 Antonio Jones, accompanied by fiancée Chantel Benjamin, was sworn in by the Honorable Kellie S. Hill. (photo courtesy of the City of Kennesaw)

Newly-elected Kennesaw City Council members Antonio Jones and Trey Sinclair took the oath of office for the first time Monday, and Pat Ferris was also sworn in to another term after running unopposed.

Attendance at the City Hall meeting was limited due to the rising number of COVID-19 cases in Cobb County, related to the Omicron variant.

Judge Kellie S. Hill administered the oath of office to Jones, while Sinclair and Ferris were sworn in by Judge Richard Blevins.

“Kennesaw would not be what it is today without your efforts,” Mayor Derek Easterling told outgoing council members Nimesh Patel and Chris Henderson. “This is one heck of a team and there are big shoes to fill coming up.”

This was Jones’ third run for Council. He beat Henderson for the post 4 seat with 55.36% of the vote.

“I just want to say thank you so much to the citizens for giving me this opportunity to serve you all,” Jones said.

Sinclair beat Jon Fred Bothers for post 5 with 52.82% of the vote. Patel took over the position when David Blinkhorn resigned to run in the Georgia House District 34 special election last year. He did not run for reelection.

“Looking forward to working with the rest of the team here. Thank you to the citizens for voting us in,” Sinclair said.

Judge Richard Blevins led Trey Sinclair in taking the oath of office. (photo courtesy of the City of Kennesaw)Councilmember James “Doc” Eaton will serve as the 2022 mayor pro team.

“Guys, I’m really looking forward to getting to know you well and serving with you. Let us have a great four years,” Ferris told the new members.