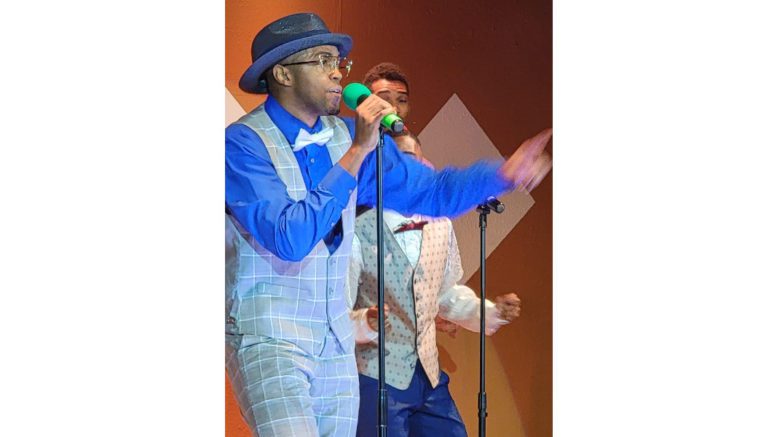 Photo courtesy of Marietta New Theatre in the Square

Atlanta GA (March 28, 2022) An exuberant tribute to the music of rhythm and blues pioneer and alto saxophonist, Louis Jordan, Five Guys Named Moe is an international sensation. Initially produced in London’s West End by the legendary Cameron Mackintosh, this exhilarating, all-embracing theatrical experience moved to Broadway in 1992 and was nominated for two Tony Awards.

Five Guys Named Moe is about our hero, Nomax – he’s broke, his lovely Lorraine left him and he’s listening to the radio at 5:00 in the morning. Out of the radio, five guys named Moe appear. Set to Jordan’s iconic rhythm and blues/jazz score, the Moes encourage Nomax to turn his life around and tell Lorraine that he loves her.

“We are excited to open our season with such a fun and exciting musical that can be enjoyed by all ages,” said N. Emil Thomas who is at the helm of Marietta Theatre in The Square and an award-winning choreographer director and writer.

Shows run through Sunday, April 10 at the Marietta New Theatre in the Square, 11 Whitlock Ave. NW, Marietta, GA 30064. Hours are 8:00 p.m. Fridays and Saturdays and 3:00 p.m. on Sundays. General and VIP tickets are on sale at www.theatreinthesquare.net.

Tickets range from $20 -$60. Group discounts are available. A special show has been added for a Saturday matinee at 3 p.m. April 9.

Marietta New Theatre in the Square seats 225 and hosts a variety of shows including dramas, comedy, and music.

One guest said this about the theater: “Enjoyed the small atmosphere and the play was great!”

And another said: Close up and personal intimate seating excellent sound good location!”

For more information contact the theatre at (770) 426-4800 or by email at boxofficetheatresquare@gmail.com

Raul Thomas founded MNTITS as a family enterprise, appointing his son, N. Emil Thomas, its artistic director. When the two set off to plan their first full season in 2016, it was imperative to the Thomases that they establish MNTITS as an artistic home for all Cobb county and greater Atlanta residents. This meant that the stories told on MNTITS stages had to reflect the communities they were attempting to serve.

N. Emil Thomas, Marietta Theatre in The Square’s executive artistic director is a southern gentleman with a New York attitude. Raised in a family of Puerto Rican New Yorkers in the quiet streets of Cobb County, GA. Emil learned early the value of time and space. His love for theatre began in middle school when he was first introduced to Musical Theatre. He continued to play on the stage in high school when he attended Cobb County School for Excellence in the Performing Arts. By the end of his sophomore year in high school Emil knew that he wanted to move from acting on stage to directing and so he traveled to Muncie, Indiana where he studied under the leadership of Karen Kessler at Ball State University as an undergrad directing student. In 2016, Emil was invited to the Kennedy Center American College Theatre Festival for directorial work in region III.

Emil and his team have created seasons that embody theatre for all, from a Gender-Swapped Hamlet, to his adaption of O’Henry’s classic tale, The Gift of the Magi 2.0, set in Atlanta during the 1950’s Atlanta streetcar strike, He’s directed the Southeast regional premieres of Carmen Rivera’s La Gringa, Tanya Barfield’s Bright Half Life, and Nambi E. Kelly’s Native Son which featured an appearance from Nambi herself and won Atlanta’s Broadway World Best Play and Director for 2017.

Emil’s The Gift of the Magi 2.0 has been nominated for 5 Metropolitan Atlanta Theatre Awards. In summer 2018, Emil relocated to Chicago, IL to further develop his craft of directing. He’s back in Cobb County at Marietta’s New Theatre in The Square.