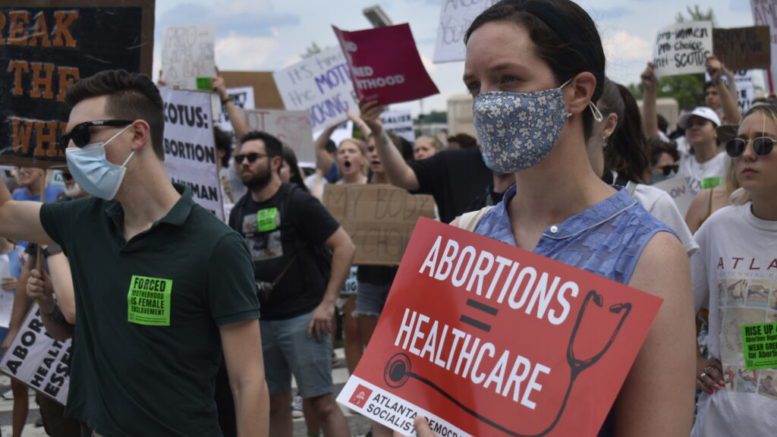 Georgia’s ban on most abortions after about six weeks into a pregnancy is now in effect after a three-judge panel ruled Wednesday that the 2019 law can no longer be seen as unconstitutional.

Wednesday’s ruling comes nearly a month after the U.S. Supreme Court overturned Roe v. Wade and left it to states to decide whether to limit access to abortion. The 11th Circuit Court of Appeals paused its deliberations on Georgia’s anti-abortion law last year in anticipation of the Supreme Court’s ruling on Mississippi’s 15-week ban.

The Supreme Court’s ruling “makes clear that no right to abortion exists under the Constitution, so Georgia may prohibit them,” wrote Chief Judge William Pryor.

Georgia’s law, which has been on hold since 2020, also redefines “natural person” to include the unborn and other personhood provisions. Wednesday’s decision rejected claims that considering an unborn child a “natural person” is unconstitutionally vague.

“When focusing on the text, as we must, it is hard to see any vagueness,” reads the court’s opinion. “The Act defines a natural person to include unborn humans in the womb at any stage of development.”

But the judges acknowledged the application of the definition could be a different story. Georgia’s law also allows expecting parents to claim their unborn child as a dependent, requires the father to pay child support while their offspring is still in utero, and deems an unborn child to be a “natural person.”

“To be sure, there might be vague applications of that definition in other provisions of the Georgia Code,” Pryor wrote. But any argument that an application of the law violates constitutional rights – such as a physician’s right to pursue their work caring for pregnant patients free from unreasonable government interference – should be made in an “as-applied manner.”

While anti-abortion advocates cheered the ruling, opponents of the law signaled Wednesday that such constitutional challenges to specific Georgia statutes touched by the new definition of “natural person” may be pursued.

“The ACLU of Georgia will continue to fight for abortion rights for the women of Georgia with all of the tools at our disposal,” said Andrea Young, executive director of the ACLU of Georgia, which represents the abortion providers challenging the law. “At the same time, Georgia voters have the opportunity to vote out politicians who oppose a woman’s right to decide when, whether, and with whom she wants to have a family.”

The ACLU and abortion rights group, including Planned Parenthood Southeast, had expected the law to take effect later this summer. They blasted the court’s order that the law immediately take effect.

“This is a highly unorthodox action that will immediately push essential abortion care out of reach for patients beyond the earliest stages of pregnancy,” the groups said in a joint statement.

“Across the state, providers are now being forced to turn away patients who thought they would be able to access abortion, immediately changing the course of their lives and futures. This is horrific. We’ll continue doing everything in our power to fight for abortion access in Georgia in the face of these harmful attacks on people’s ability to control if and when to have a child.”

The law bans abortions once fetal cardiac activity is detected, which is usually at about six weeks and before many women know they are pregnant. It allows only a few narrow exceptions: in the case of incest, rape or when a woman’s life is in danger.

After the June ruling overturning Roe v. Wade, the 11th Circuit immediately ordered both sides of the case to file briefs on what the Supreme Court’s ruling means for the state’s appeal. Those briefs were filed late Friday, with the state arguing the plaintiffs “have no case” after the Supreme Court’s ruling. The ACLU had continued to argue the personhood provisions were too vague.

“It is the constitutional duty of the Georgia Attorney General to defend the laws of our state,” Attorney General Chris Carr said in a statement. “Today, our arguments have prevailed, meaning the Eleventh Circuit has allowed Georgia’s LIFE Act to take effect immediately.”

Impact on the ballot box

The continued fallout of the Supreme Court’s decision to end a five-decade protection of abortion rights is likely to be a dominant issue in this year’s midterms, even as Georgia Republicans try to keep the focus on the economy and national politics.

Republican Gov. Brian Kemp quickly issued a video statement featuring him with his wife Marty at his side. Kemp celebrated Wednesday’s ruling but also sought to highlight efforts to improve supportive services for women and children, such as a bill this year extending postpartum Medicaid coverage for mothers from six month to one year. Georgia has grappled with a high rate of maternal deaths.

“We will continue this important work in the days and months to come,” Kemp said.

Democratic opponents of the Republican incumbents who either helped push through the anti-abortion law or fought the measure in court immediately lambasted their opponents. They point to polls that showed broad support in Georgia for Roe v. Wade.

“It’s a fact that in Georgia forced pregnancy is now the law of the state,” Abrams said in a video statement of her own. “The draconian abortion ban signed into law by the current governor in 2019 makes it a crime to seek an abortion after six weeks of pregnancy. Georgia women will lose their right to choose before most even know they’re pregnant because of the governor’s calloused decision to put his politics above women’s health care needs.”