Several months ago, Reformation Brewery reached out to the Courier, offering us a self-guided tour of its Smyrna location. The offer came in light of Smyrna City Council’s controversial decision allowing StillFire Brewing to expand its brewery to downtown Smyrna.

While the downtown StillFire location is set to open within the next year, Reformation Brewery’s Smyrna location was the first brewery in the city. It opened its doors in January 2020 and has been met with a wave of positive reviews.

Reformation Brewery, a craft brewery, was founded on October 31, 2013. That date is Reformation Day, named for 16th-century Protestant leader Martin Luther — hence, the name. The owners liked to engage in conversations about theology.

As reported in the January Courier article discussing Smyrna City Council’s decision on StillFire, Smyrna Economic Development Director Andrea Worthy said that craft beer is a booming business in Cobb County and across the country.

In a presentation Worthy made, she said that Georgia has added over 100 craft breweries since 2011 and that the Peach State ranks 48th in breweries per capita. Per a 2019 study, the industry had a $2 billion economic impact in Georgia.

Reformation Brewery has three locations — in Smyrna, Woodstock, and Canton.

The Smyrna location is on Riverview Road a few minutes from Atlanta. It is located in The Eddy at Riverview Landing and faces the Chattahoochee River, where customers can take an open container and enjoy a walk on the rocky trail along the river.

There are also multiple sitting spaces immediately outside of the brewery and across in front of the river, including a patio area and Riverview Park, which features a stage, a green space, a boat launch, and free public parking and restrooms.

[All photos by Arielle Robinson] 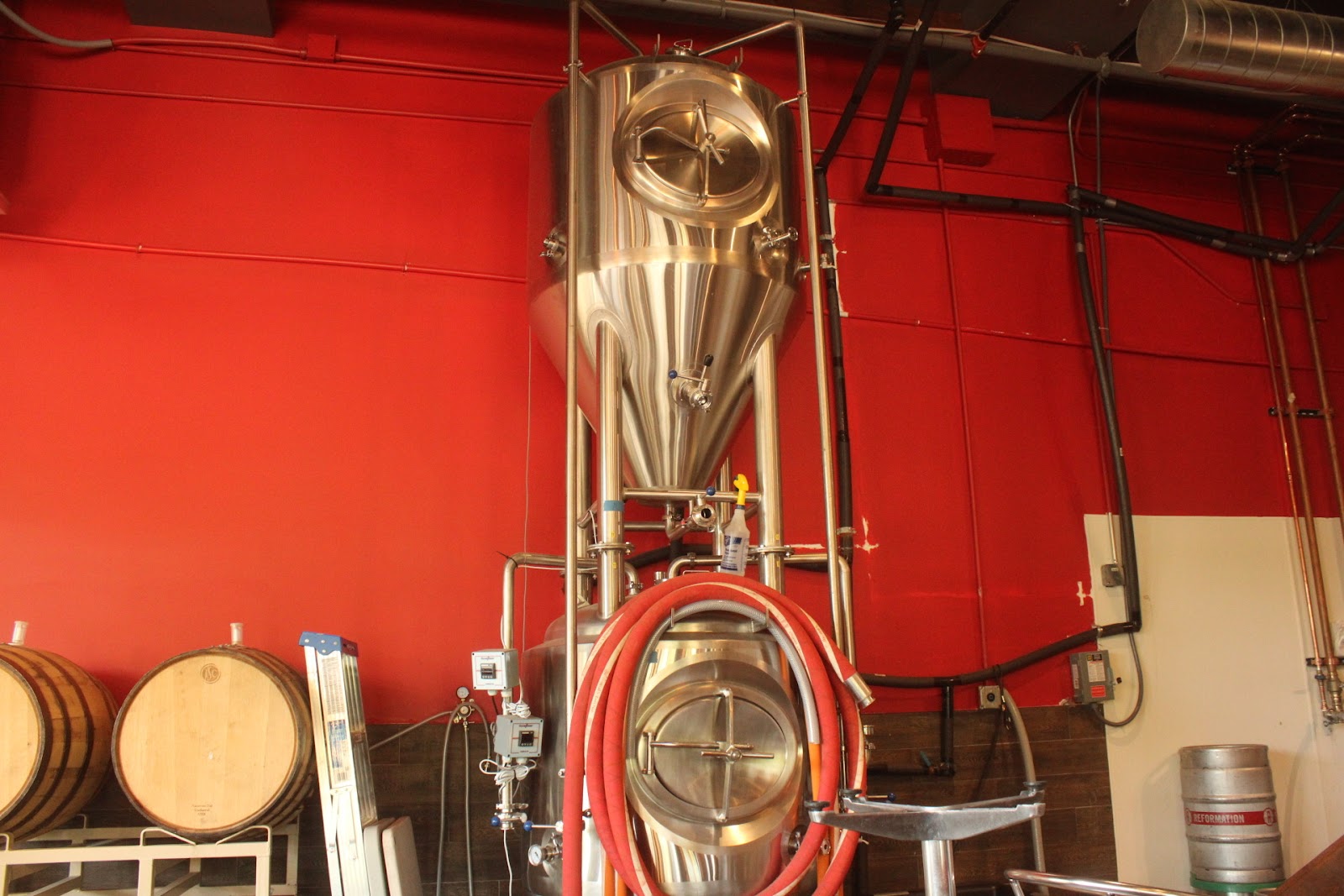 This is a fermenter, used to brew beer. This one is currently not in use. While beer is manufactured on-site at the Smyrna location, brewing takes place in Canton and Woodstock. 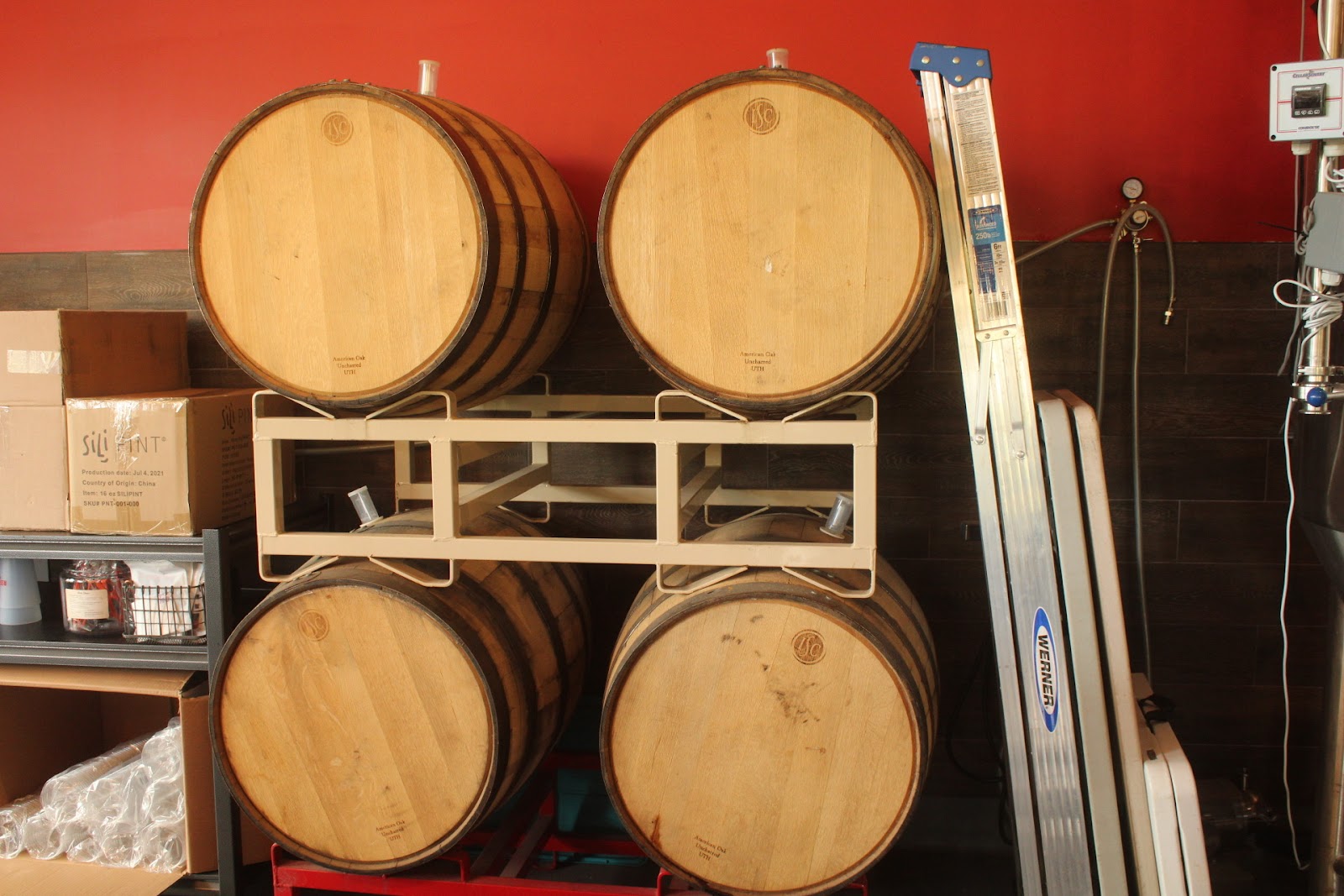 These barrels currently have beer in them. The barrels previously had liquor in them and so the beer that is now in these barrels is absorbing the liquor flavors that previously were in the barrels to create a richer tasting beer. It takes about a year for this process to complete. 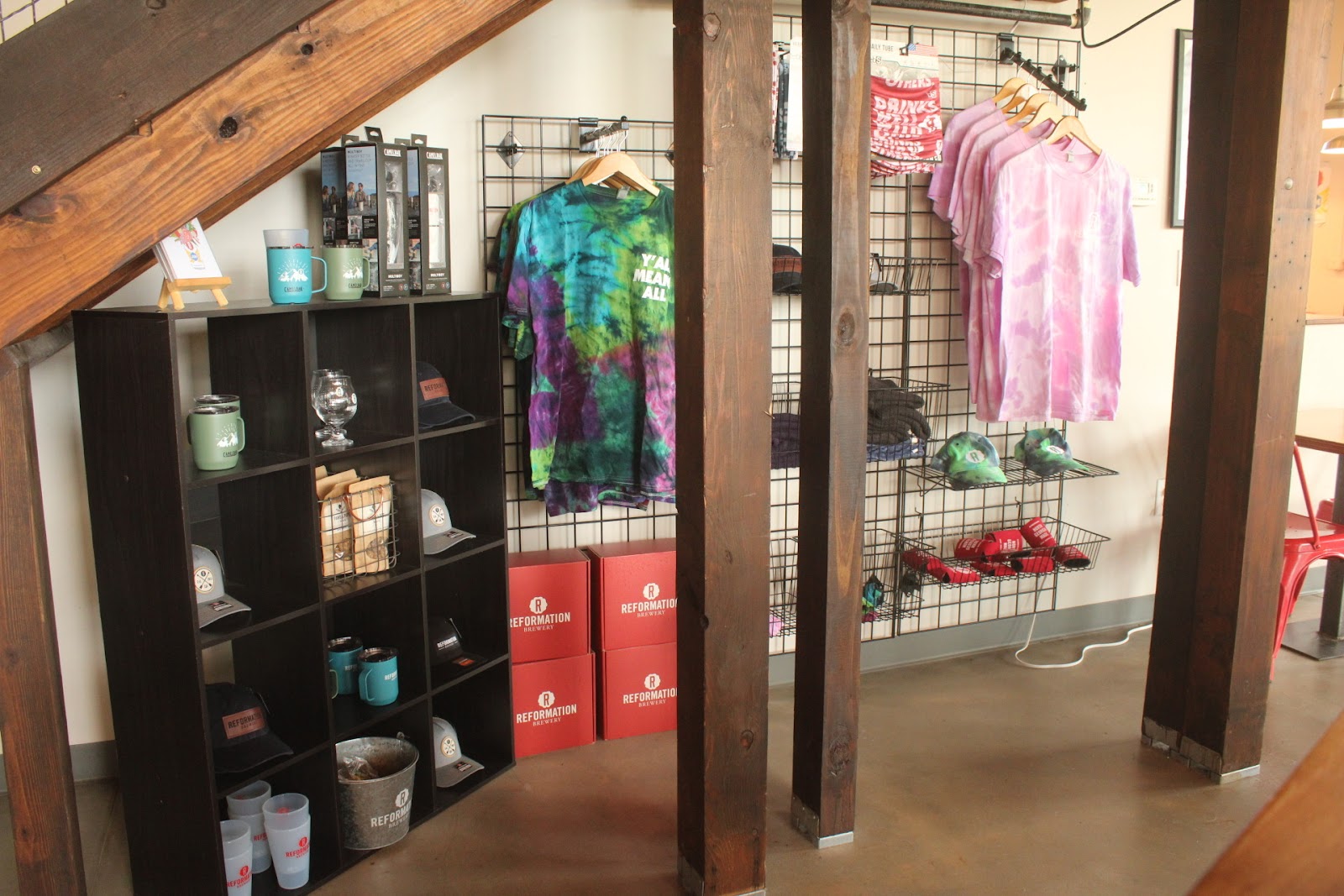 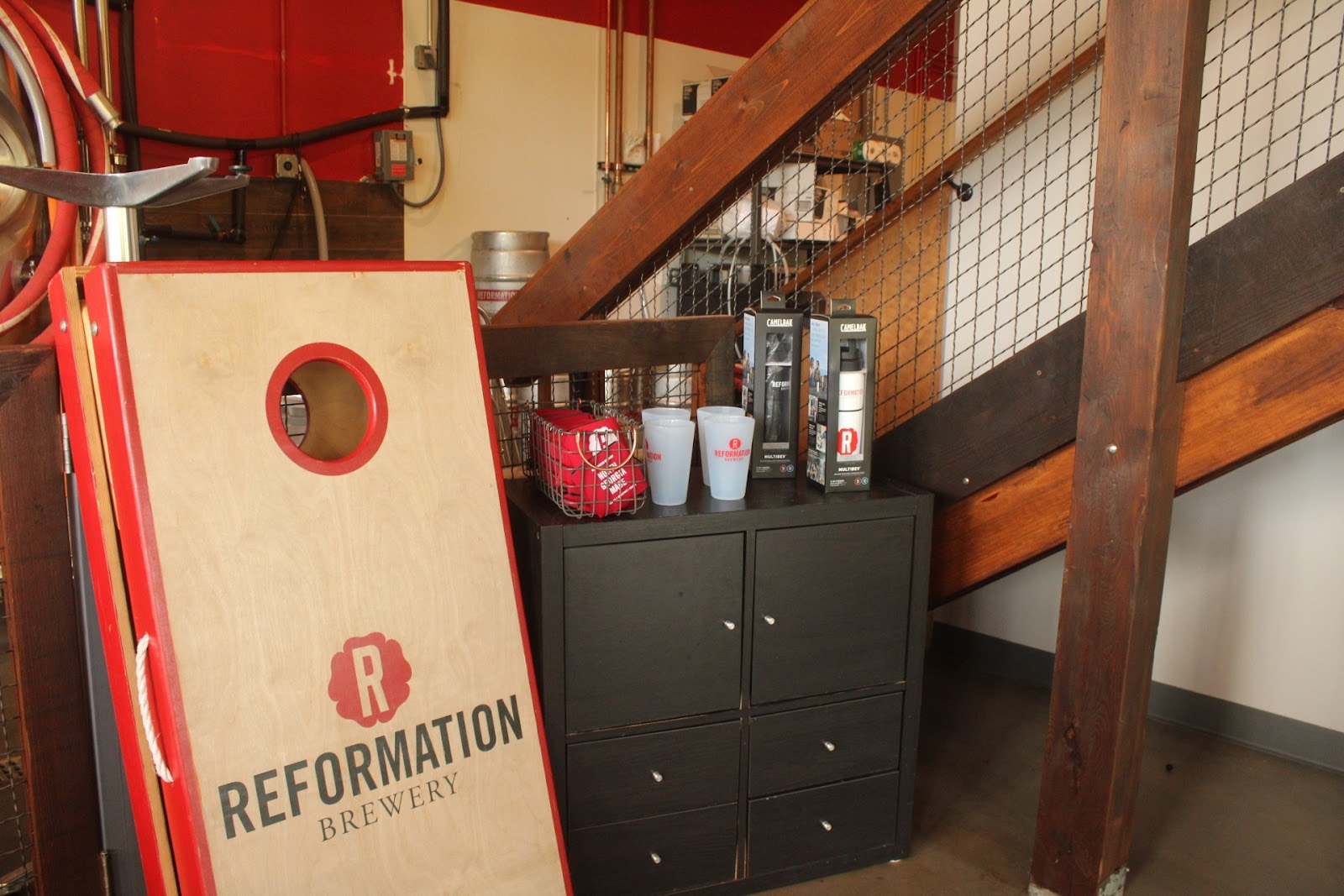 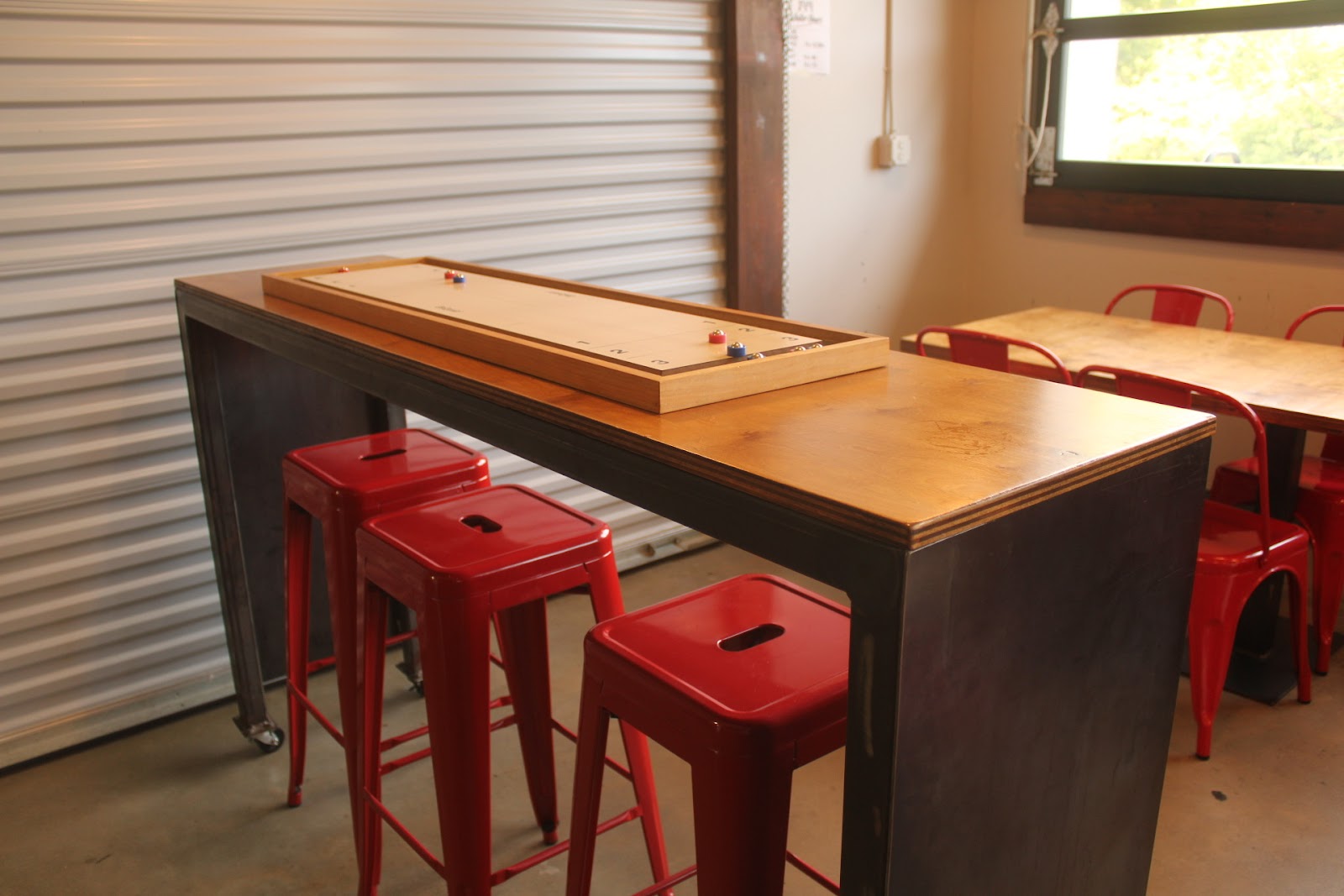 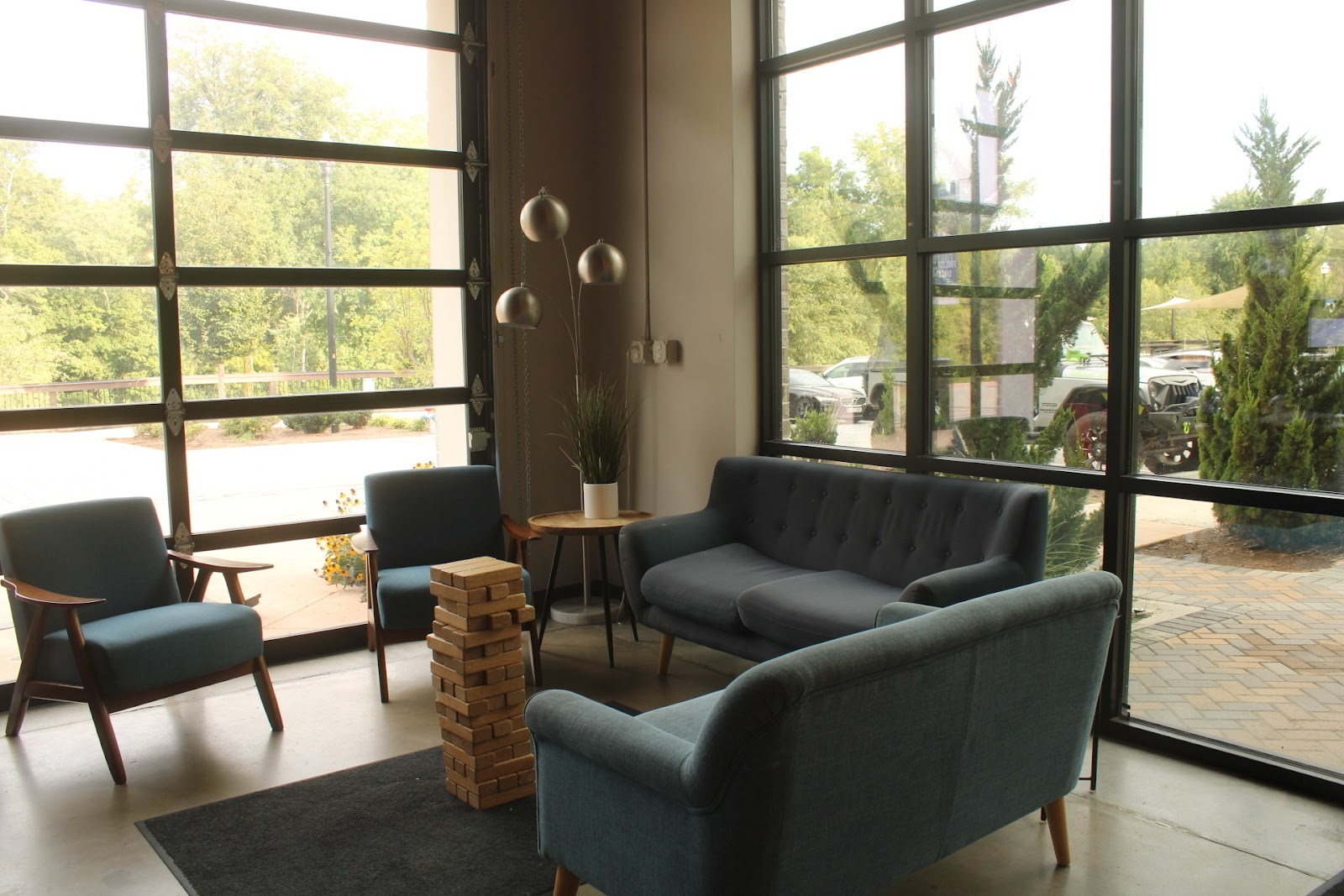 Reformation Brewery sells merchandise and is also a family and pet-friendly place where customers can play games. The picture with the board that says the company name on it is a board for cornhole. The bottom picture shows a seating area where customers can play Jenga. When the weather is nice outside in the spring and fall the brewery opens its windows. There are also outdoor games. 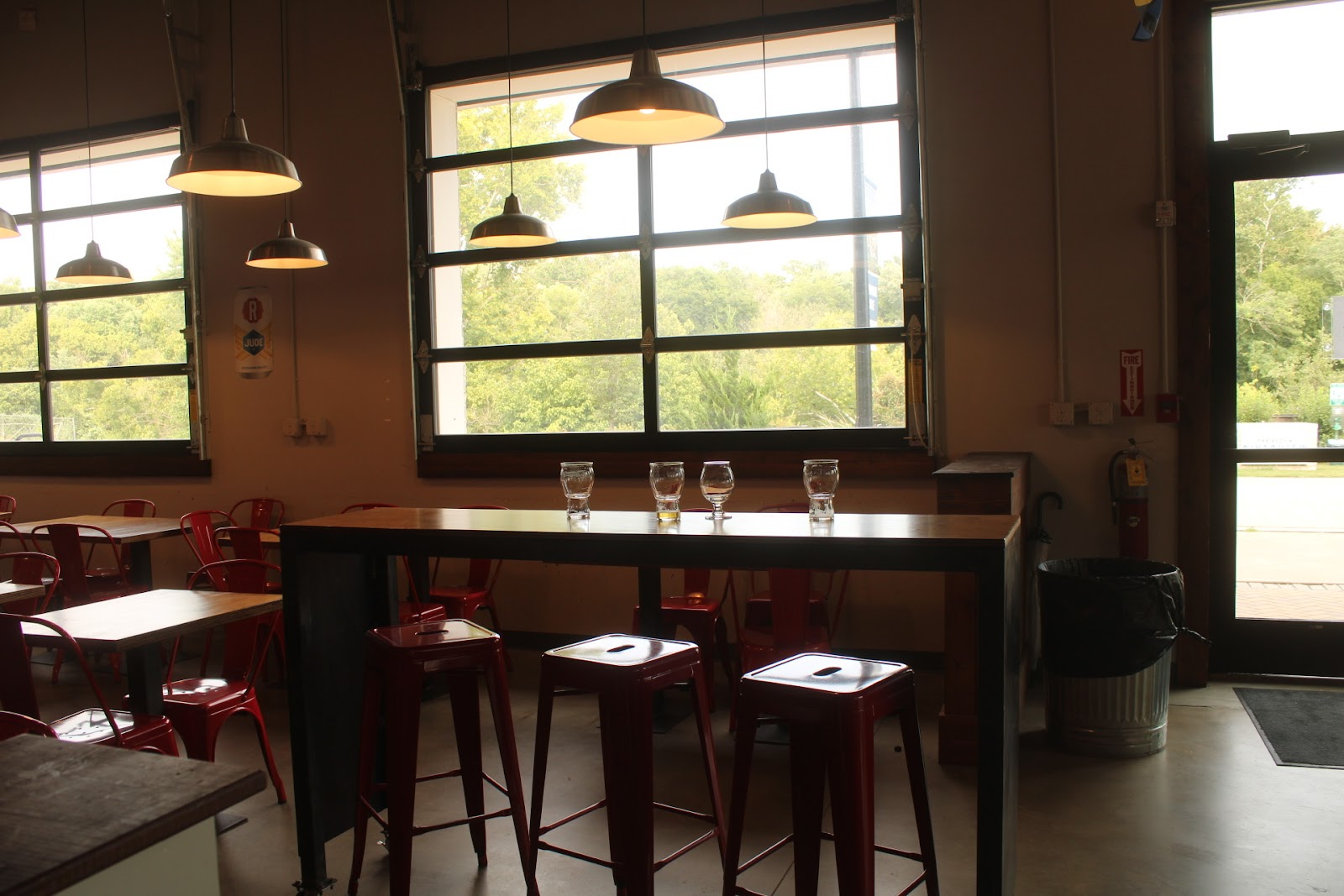 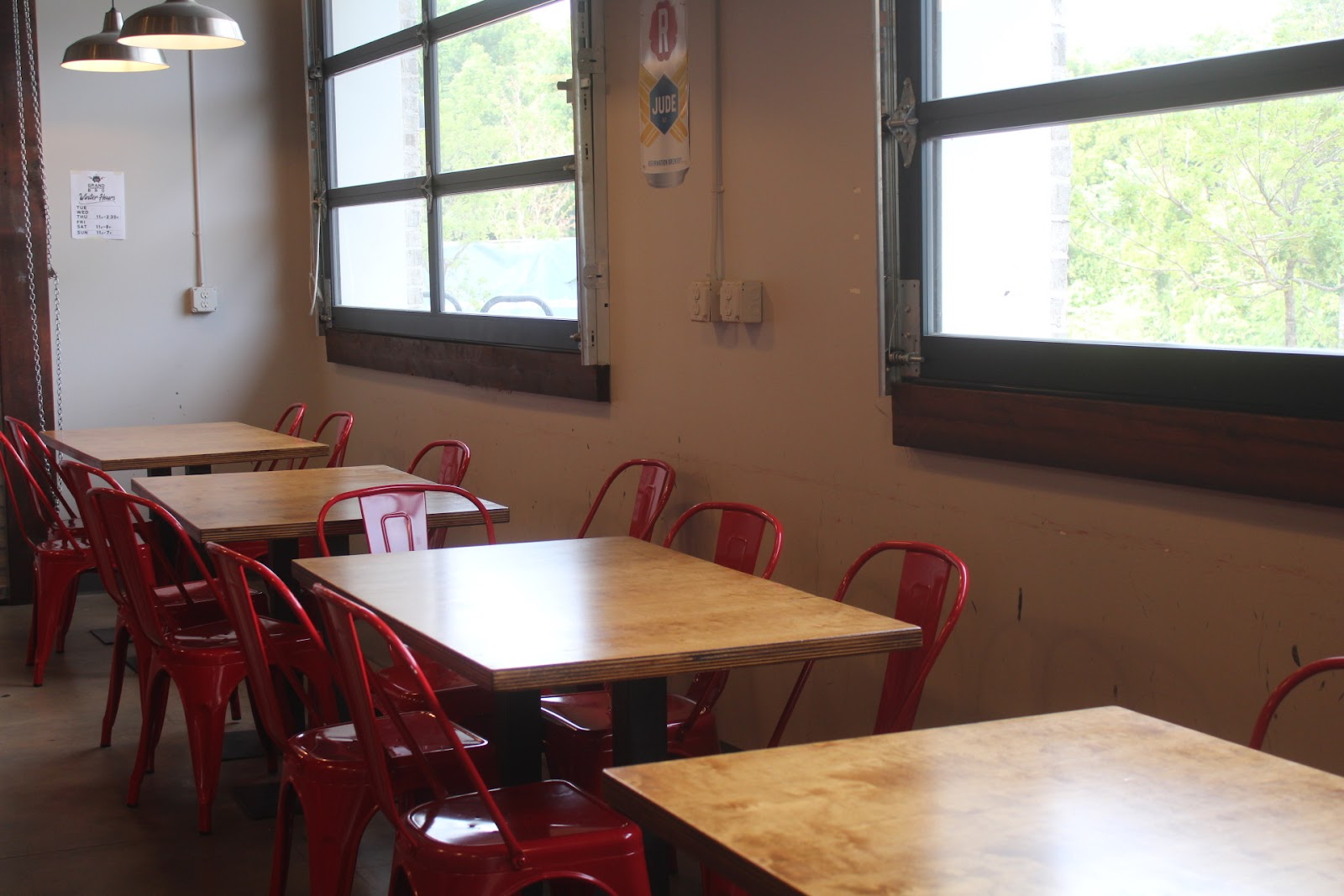 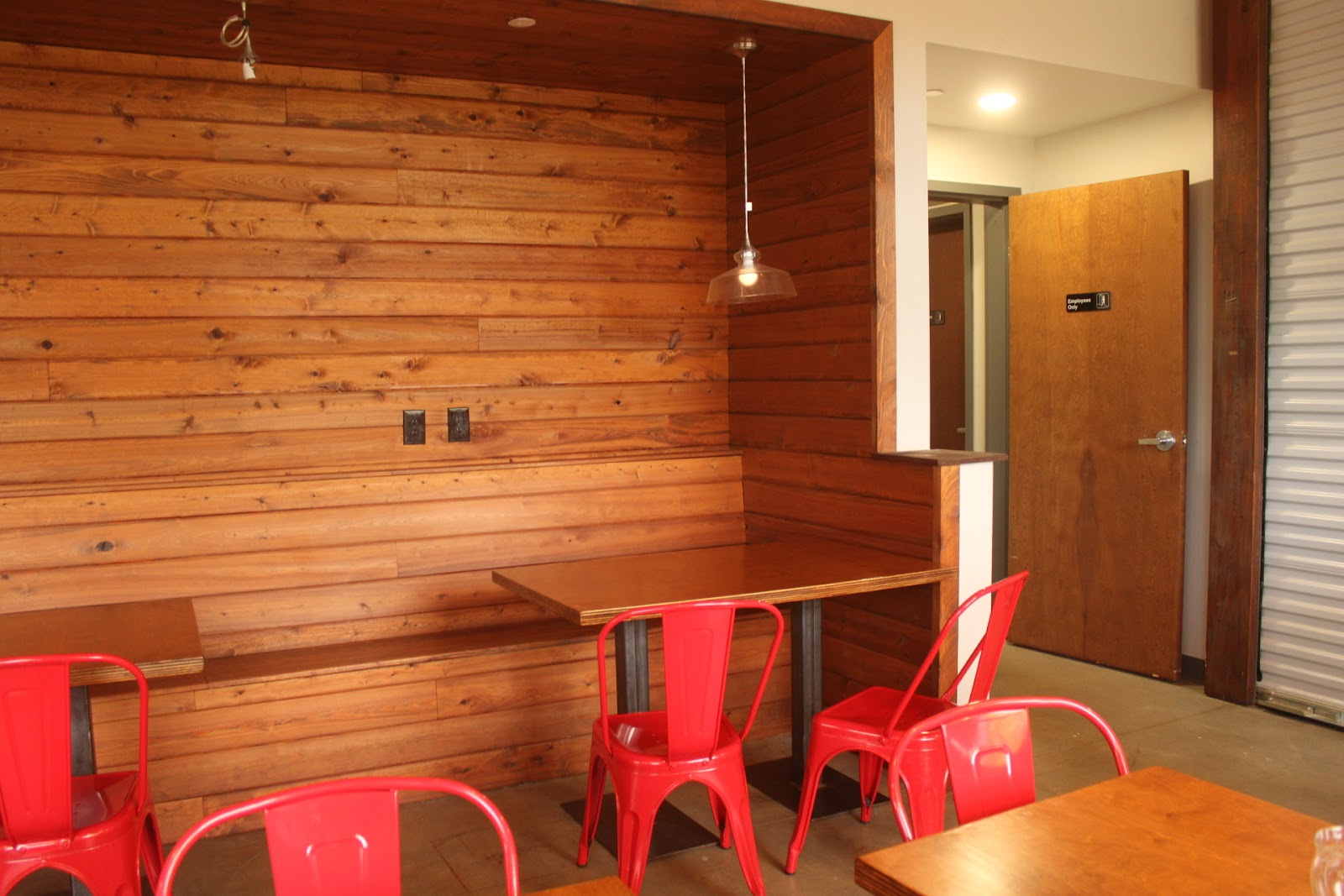 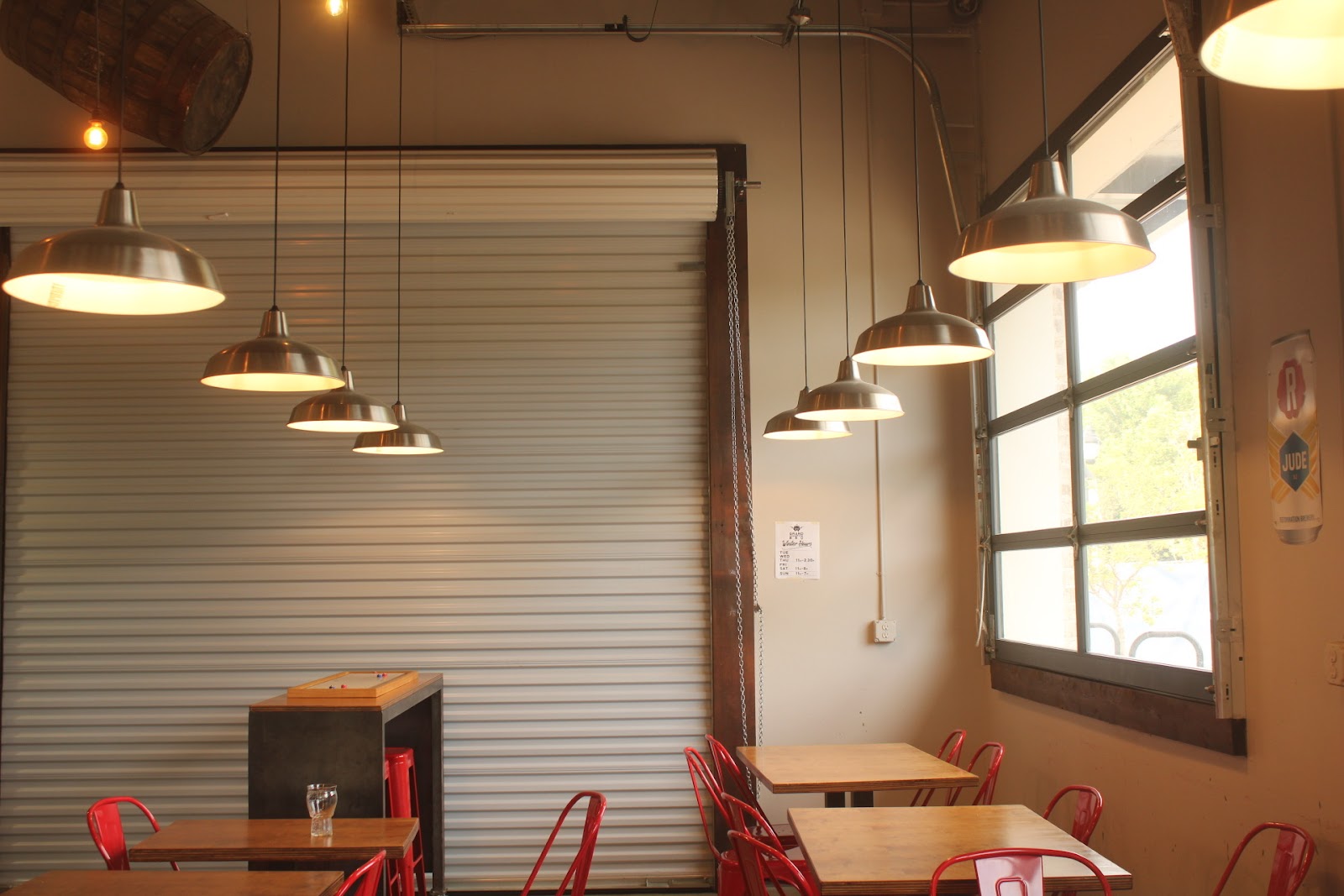 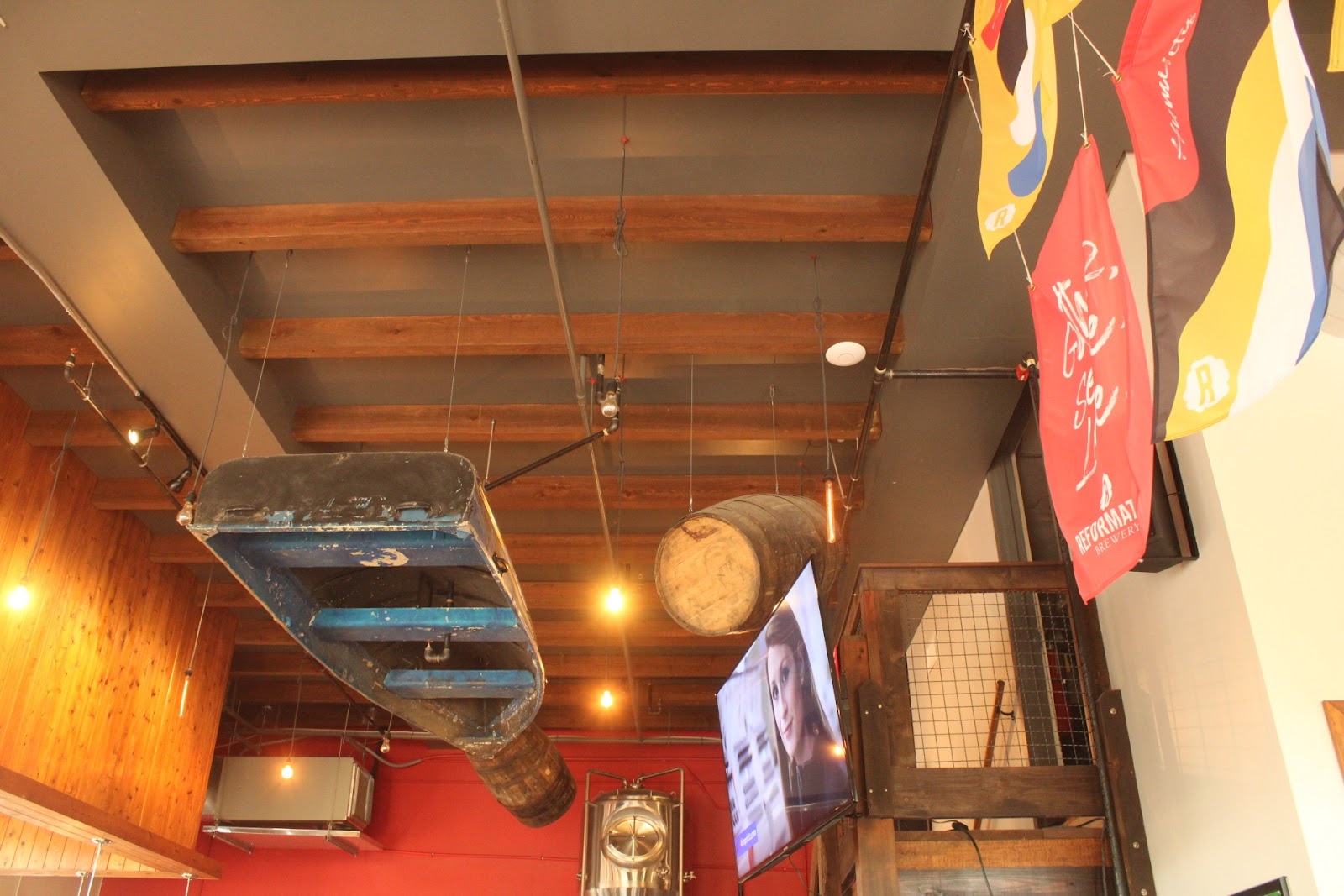 Boats and barrels hang from the ceilings of the brewery. The brewery locations purposely limit the number of TVs they have, as they prefer customers to talk to one another. 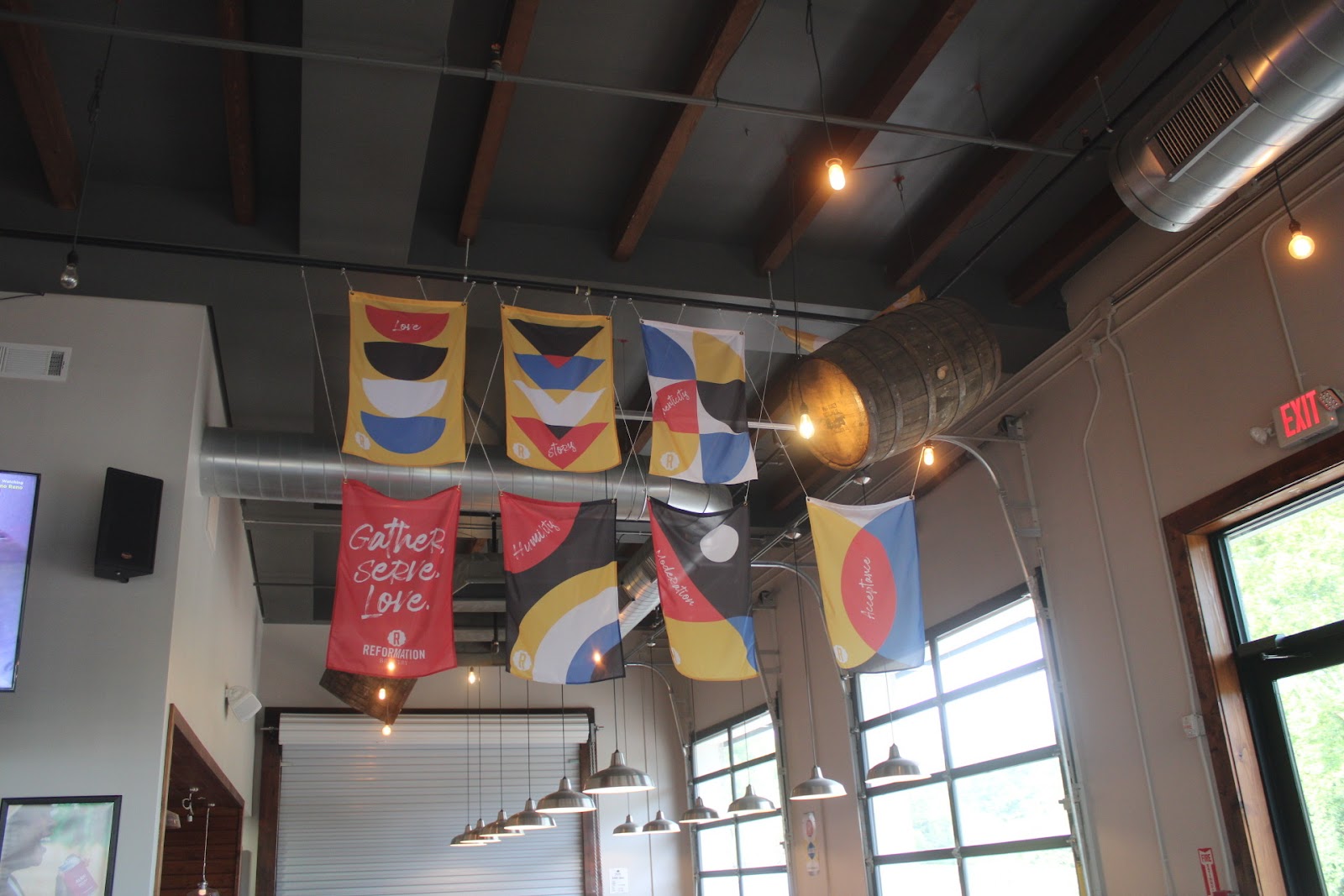 Flags hang from the ceilings as well. Each flag has a word written on it, which symbolizes the owners’ values. Some words say “love,” “acceptance,” “humility,” and “moderation.” There are some beers at the brewery named for these values. 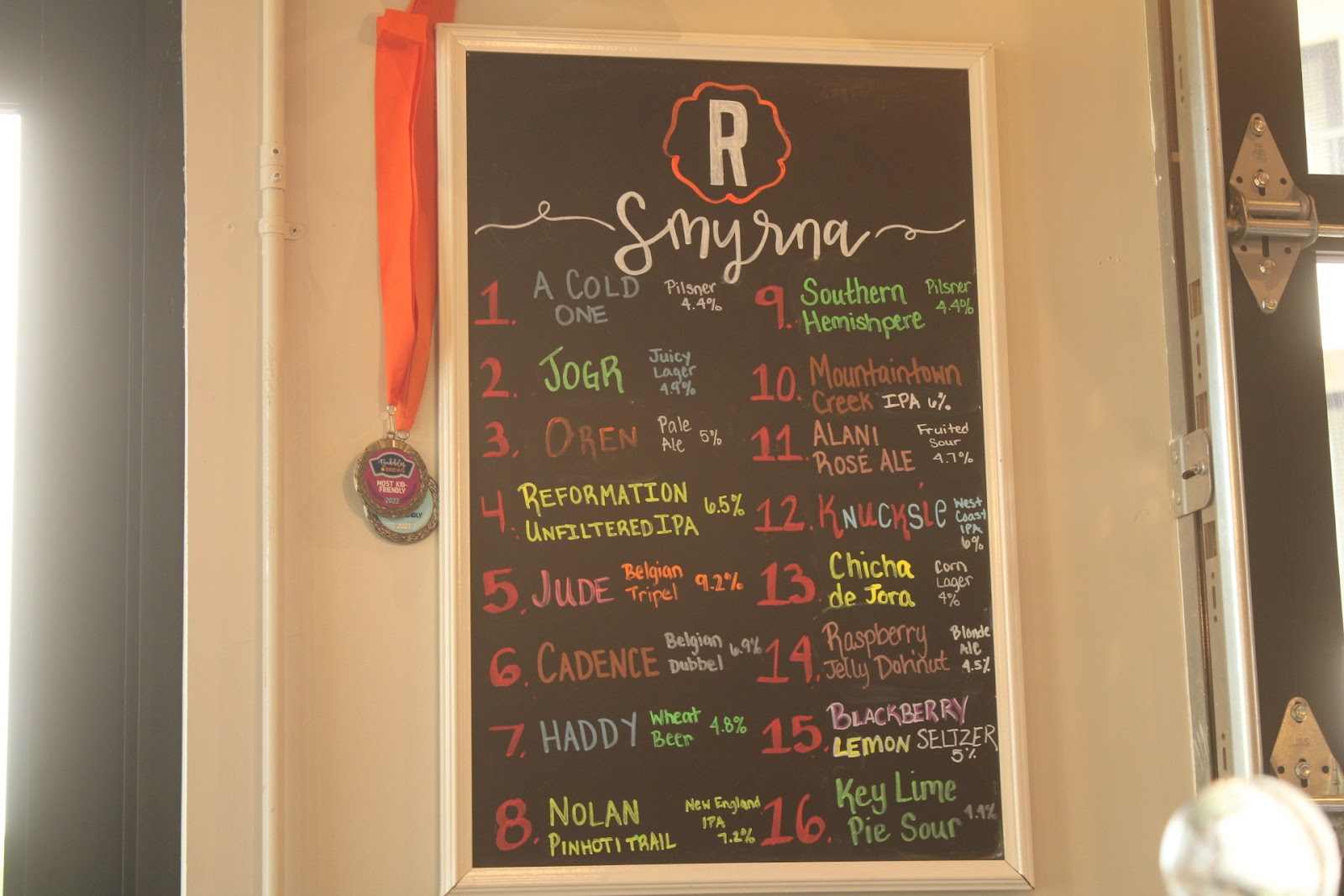 This is a picture of the beer menu for the week. Menus change weekly — sometimes daily — but items number one through eight almost always remain the same. A number of beers are named after outdoor features — like the Nolan Pinhoti Trail. A few beers are also named after brewers’ children — like Oren and Jude. “A Cold One” is the current top-selling beer, with 4.4 percent ABV. Reformation Brewery is also known for its Belgians. One of the brewers is a pilot and liked to pick up beers from Belgium and bring them back to the United States. This inspired the brewers to create their own company. IPAs are also popular. 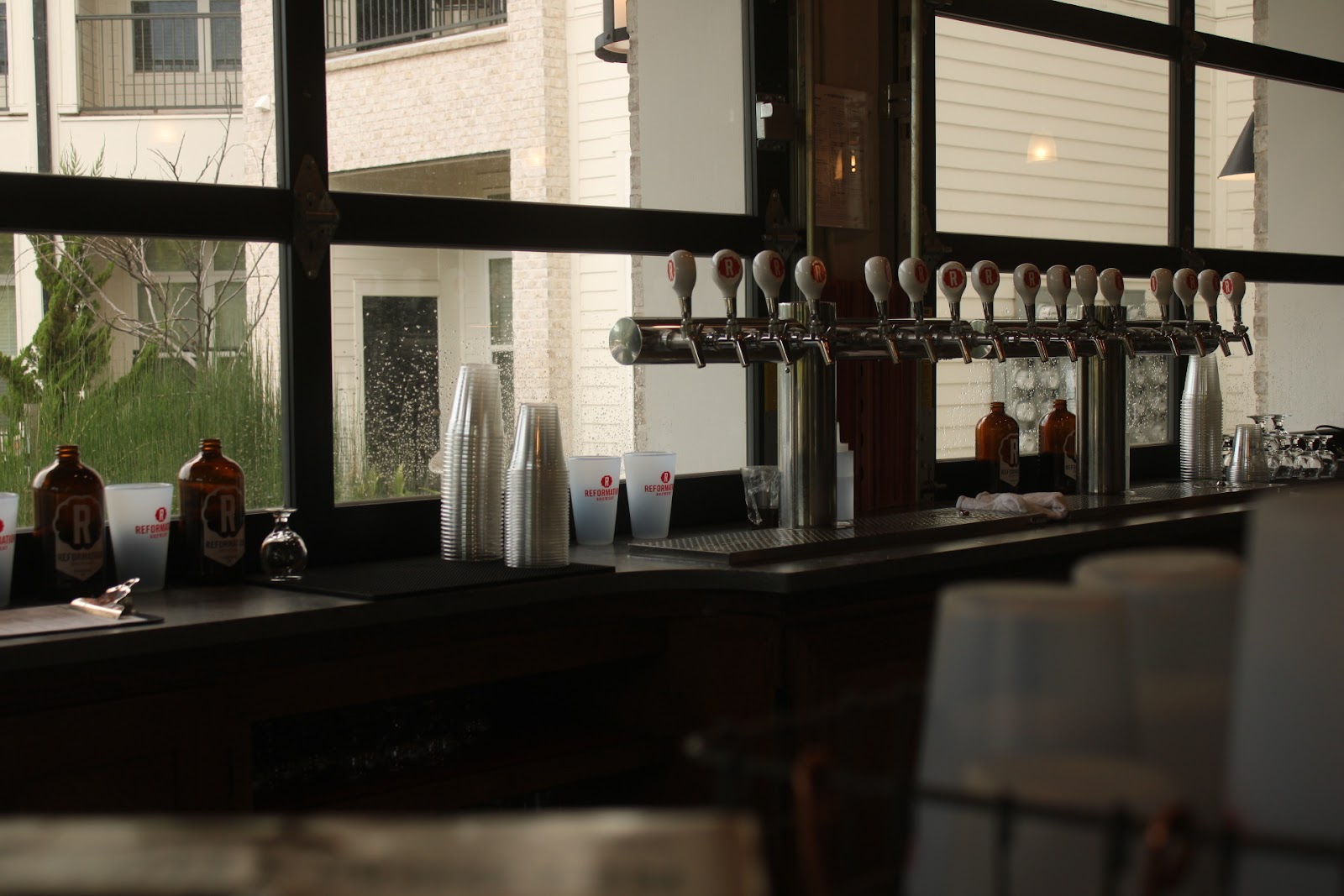 The Smyrna location has 16 taps. The other locations have over 30. The brewery has additional beer in the back that is not on yet but can be brought out if a keg is gone through really quickly. 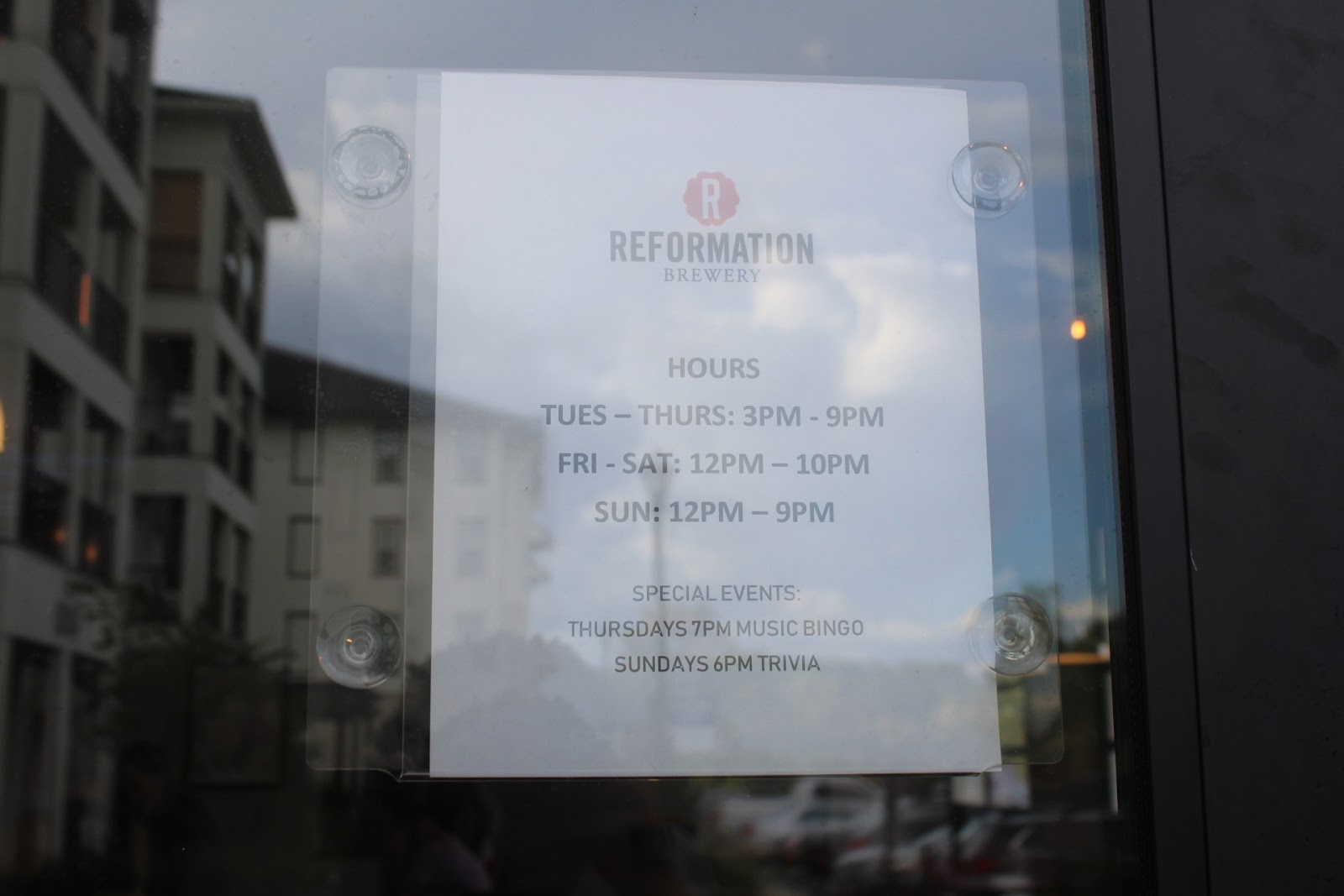 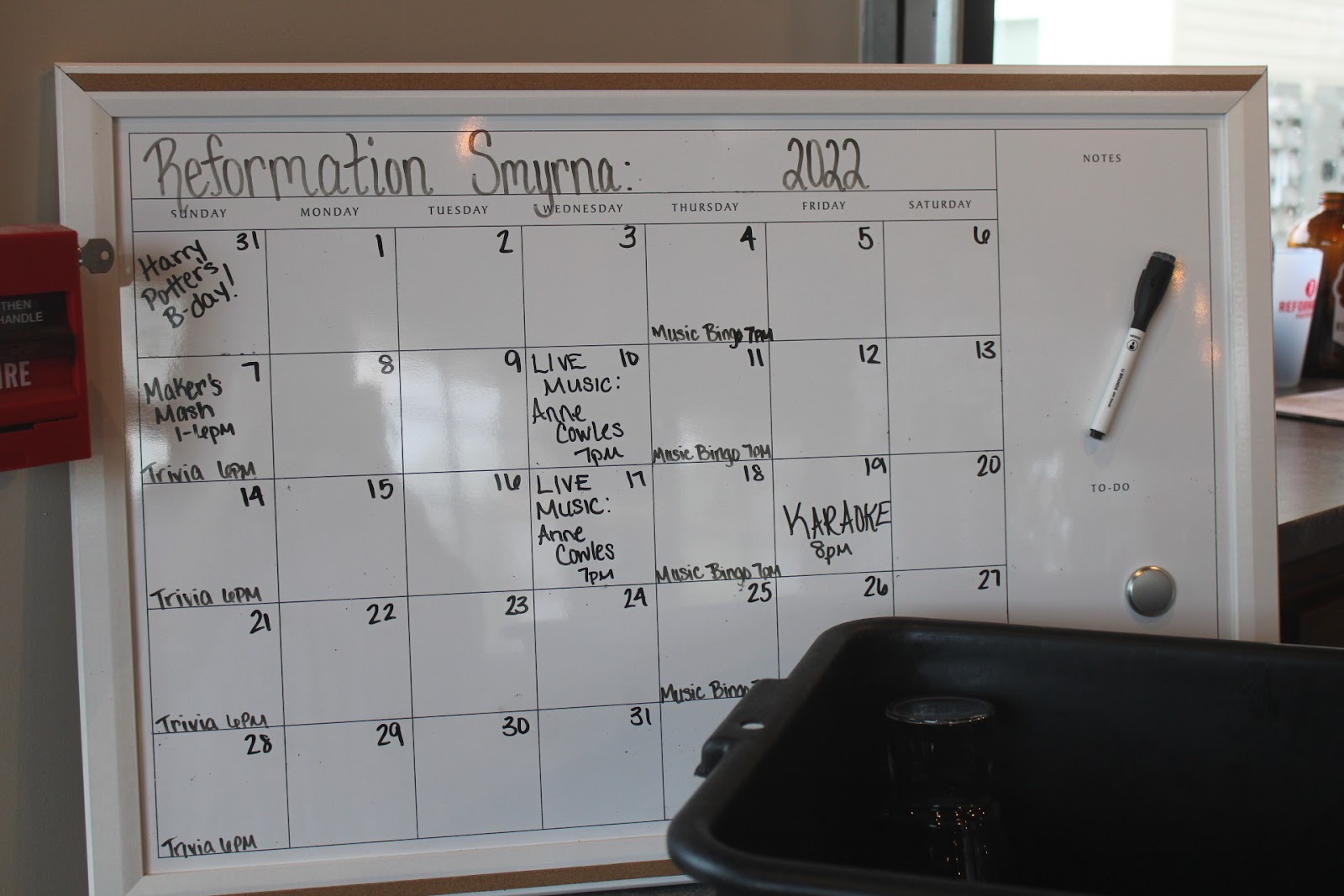 Reformation Brewery, in addition to games, also hosts different kinds of live events. Every Thursday at 7 p.m. is music bingo while every Sunday at 6 p.m. is trivia night. Prizes include free beer among other items. The above calendar also shows that the brewery hosts live music and karaoke, among other events. 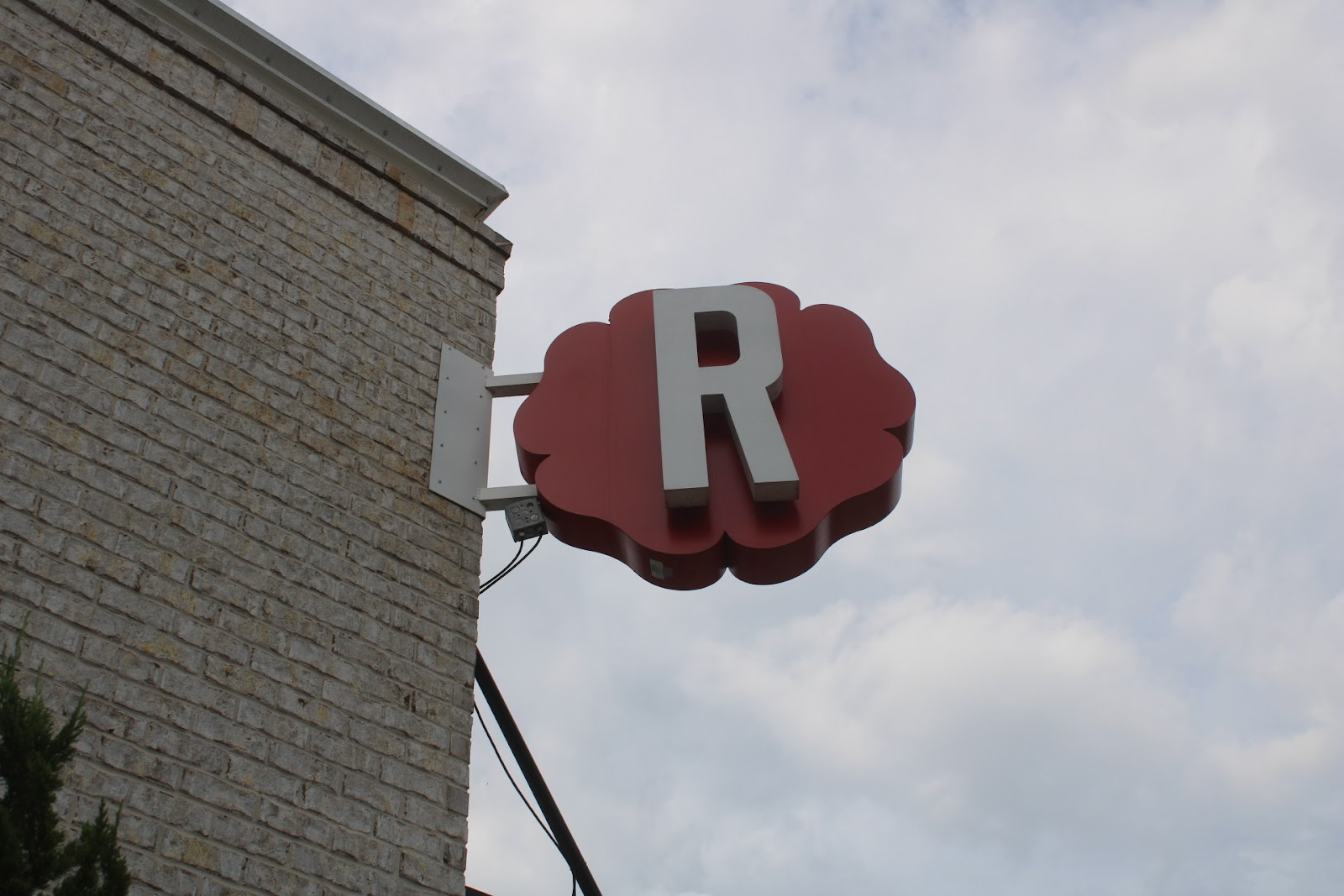 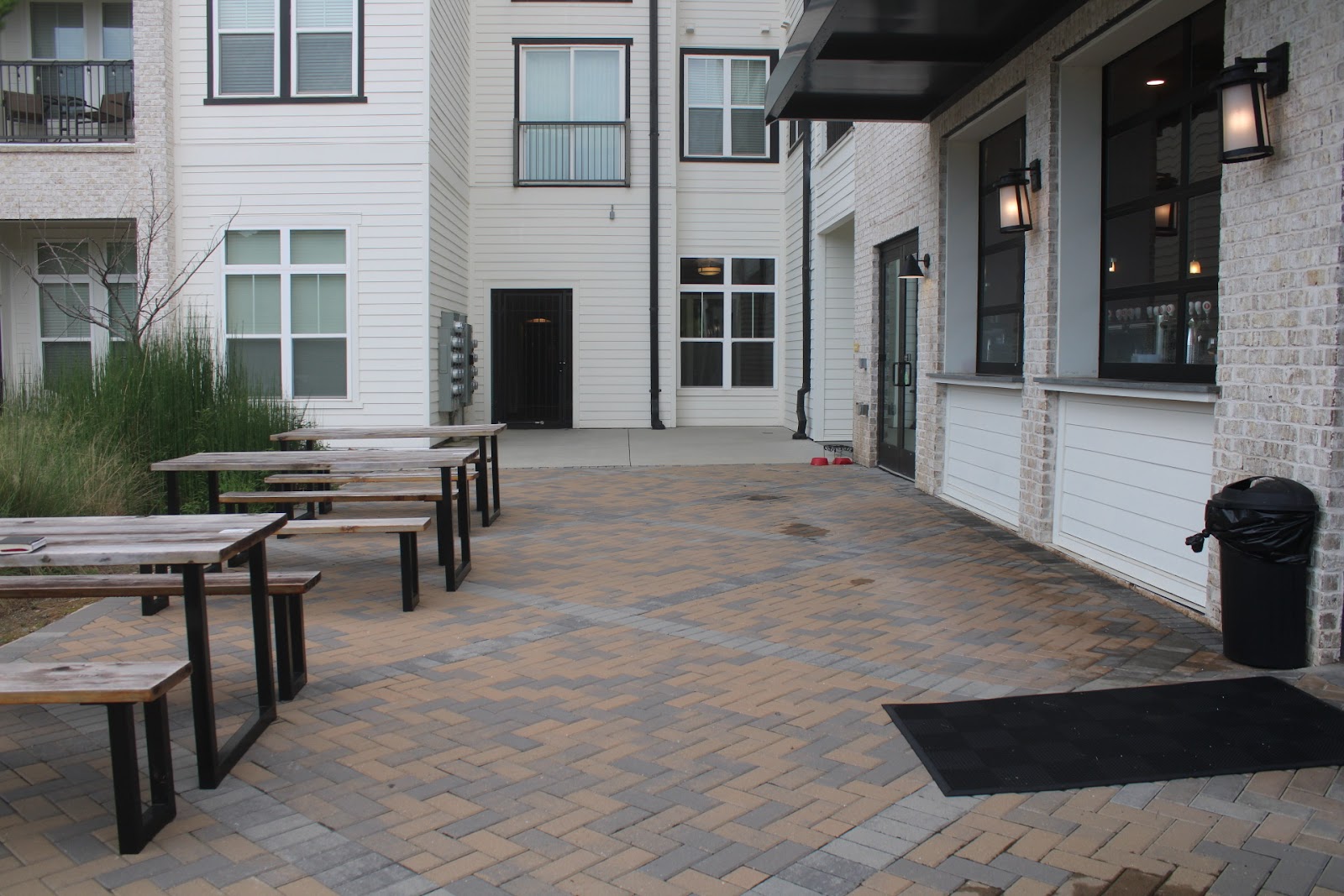 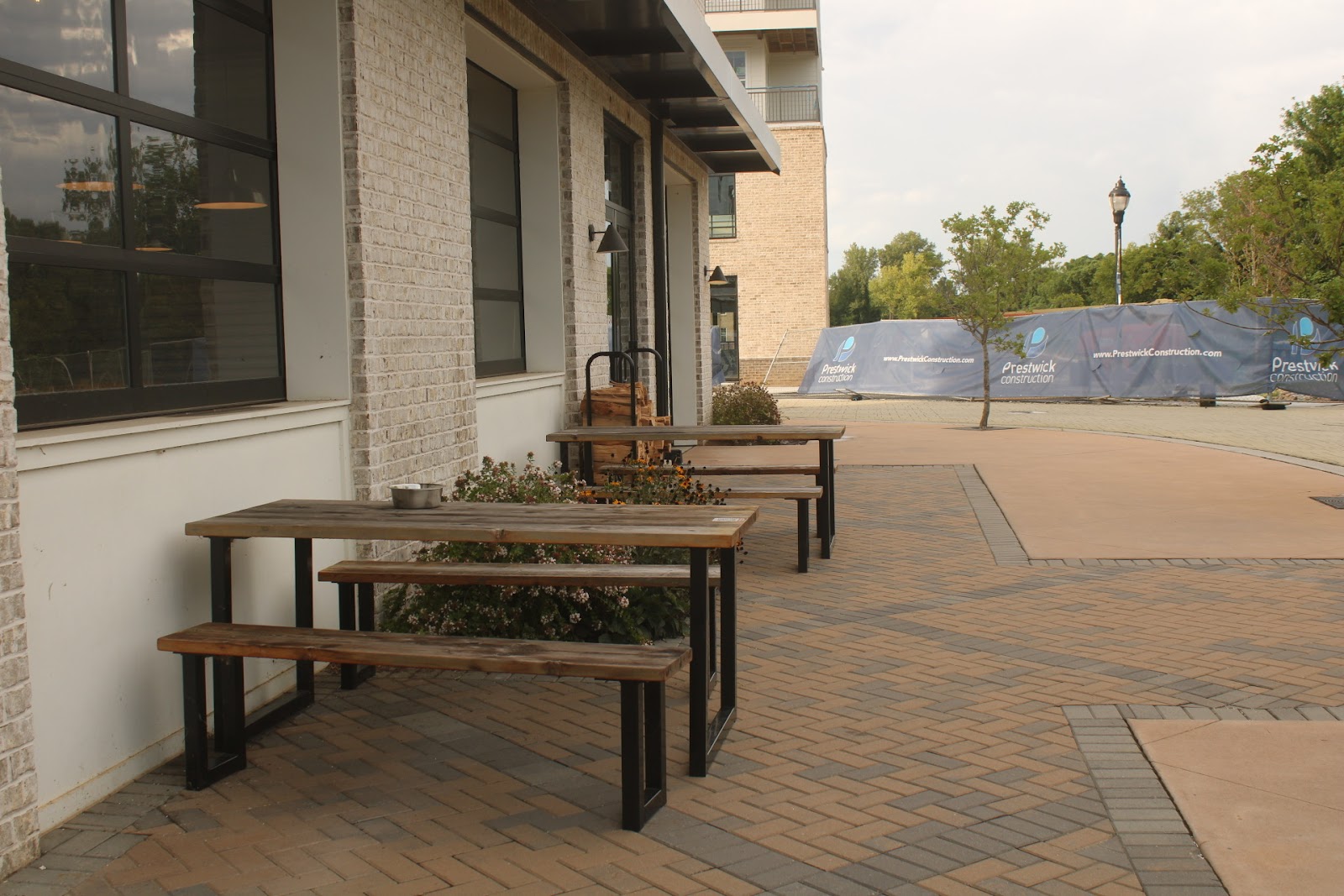 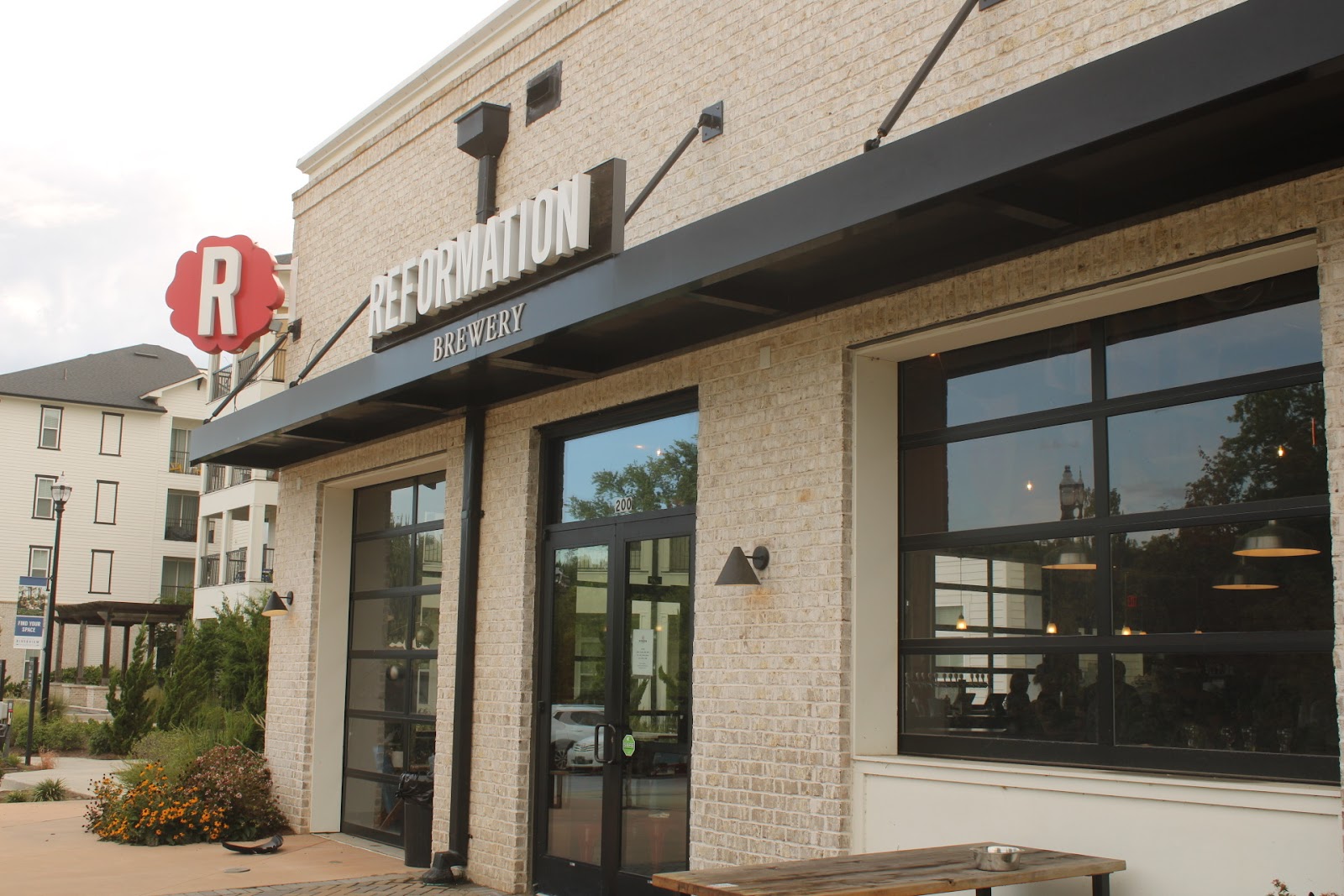 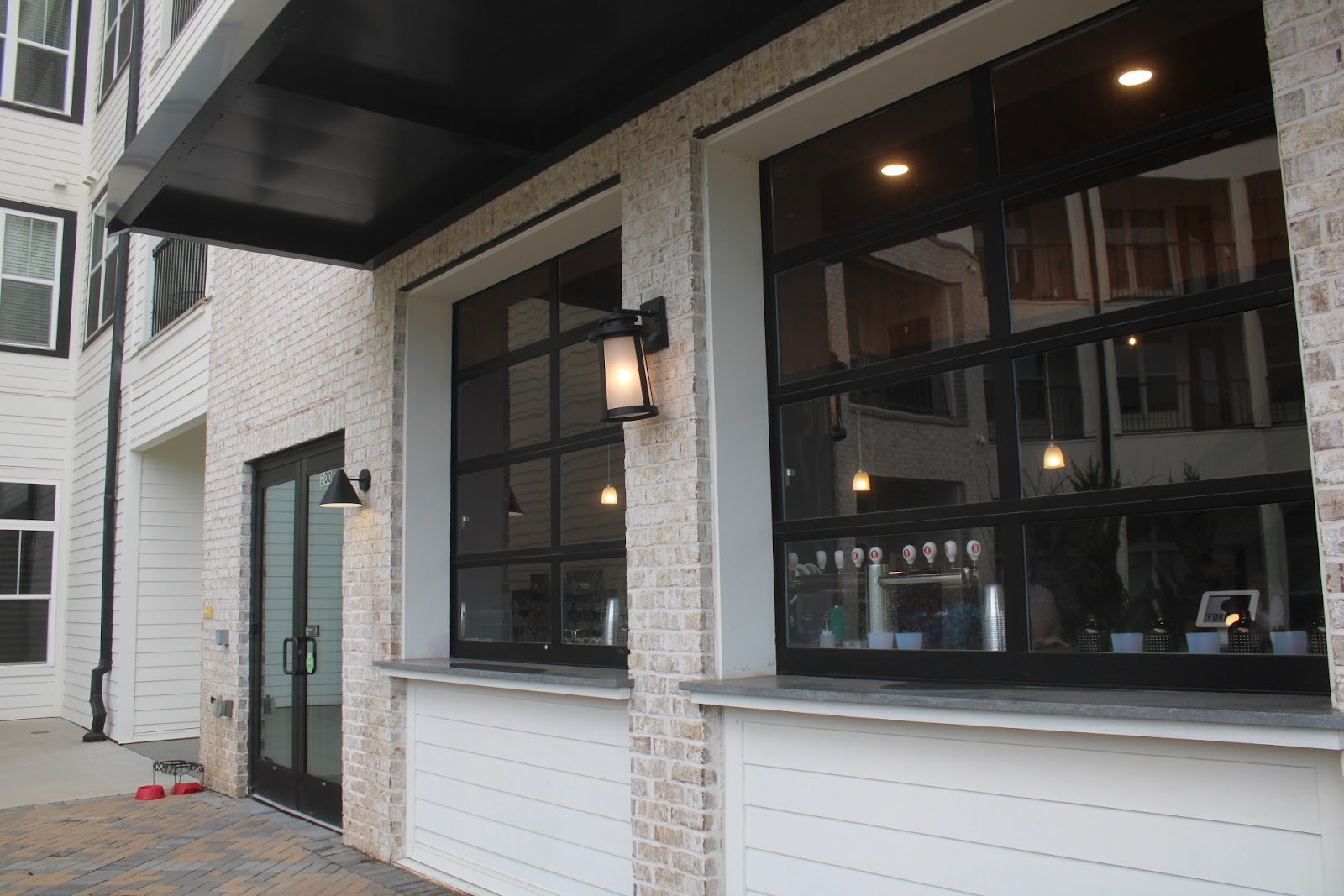 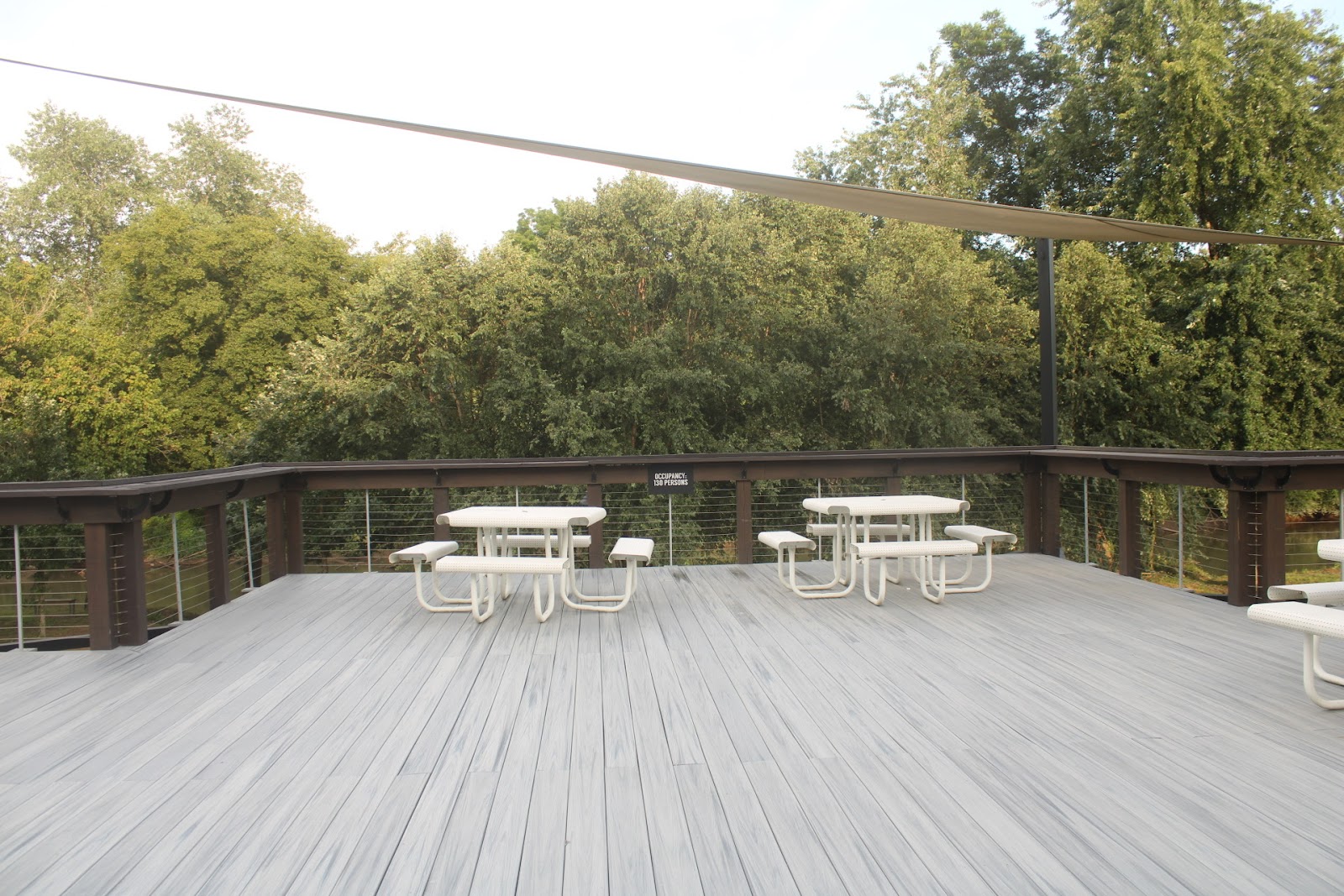 Flooding behind Riverview Landing on the Chattahoochee

The Cobb County Courier’s Cat of the Day for December 8, 2022, selected from the Cobb Animal Shelter website, is a short-haired domestic kitten who hasn’t been named yet. This…

The Cobb County Courier’s Dog of the Day, selected from the Cobb Animal Shelter website, is a medium-sized mixed-breed hound, who has not yet been named. This sweet boy will…

The Georgia Department of Public Health reports on the COVID numbers for the state and the counties weekly. These numbers are from the report issued on Wednesday, December 7, 2022….

by Tim Golden, ProPublica This story was originally published by ProPublica. ProPublica is a Pulitzer Prize-winning investigative newsroom. Sign up for The Big Story newsletter to receive stories like this…