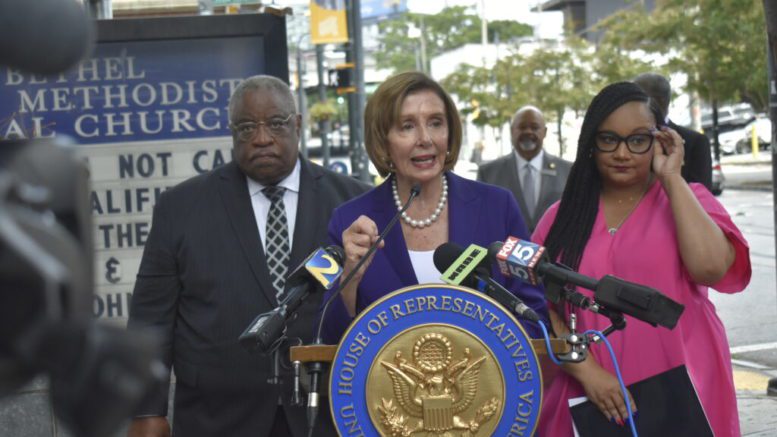 The measure builds on a grant called the Reconnecting Communities Pilot Program based on legislation written by Atlanta Democratic U.S. Rep. Nikema Williams and passed in the Bipartisan Infrastructure Law signed last November.

“When we passed the infrastructure bill, people said ‘is this going to be more of the same, building things that divide communities?’ We promised that it would not, in fact, that it would connect communities,” Pelosi said. “And in the bill, there is the reconnecting communities pilot program, $1 billion to take us down that path. But that was not enough. The Inflation Reduction Act legislation that was just passed and signed by the president, we have $3 billion.”

Those dollars will help to reconnect neighborhoods divided by the 1956 Federal Highway Transportation Act, which created the modern highway system but plowed through many Black neighborhoods, cutting off access to amenities and sometimes seizing and bulldozing houses, businesses and churches, Williams said.

“While the federal government was previously intentional in dividing communities, under the Biden-Harris administration and the leadership of Speaker Nancy Pelosi, we are taking that same intentionality, but using it for good,” she said. “When before, the government imposed these projects with no community input – because who would say yes to taking away their family property, their family land, and running a (highway) through their living room, we are intentionally listening to our communities to know exactly what people want and need.”

Sweet Auburn residents say they know all about what it’s like to have a community divided by an interstate highway.

Kevin Jackson is the former Board of Trustees chairman of nearby Wheat Street Baptist Church, whose family has been worshiping there for generations. Speaking during a roundtable discussion at Sweet Auburn’s Big Bethel AME Church, Jackson told Pelosi about his mother, who was 10 years old when the Downtown Connector came through and knew people whose houses were destroyed by the project.

“It’s not just traumatic for the individuals who it exploits, but that created community pain, community PTSD, if you will,” he said.

That pain still exists in the form of health problems and traffic speeding down residential streets, said LeJuano Varnell, executive director of Sweet Auburn Works Inc., an organization dedicated to promoting and protecting the neighborhood’s history

“We can use the planning dollars to think critically about what it means to have two to three degrees higher temperatures along the corridor, what it means to have an additional 17 to 22% increase in CO2 to add an inadvertent amount of highway traffic into our small, historic 170 year-old streets in this neighborhood,” he said.

“I hope it’s a small down payment for a larger effort to ensure that healing happens across the country, not just in Sweet Auburn,” he added.

A similar story played out in Macon, where a vibrant African American community known as Pleasant Hill was chopped in two by the construction of Interstate 75 in the 1960s, and in Savannah, where thriving middle class Black communities in an area called the West Broad Street corridor were destroyed to make room for the I-16 overpass, according to Savannah Morning News.

“If you go to grants.gov and put in the search (term) ‘reconnecting communities,’ the pilot program is available right now, and you can apply for your organization, for your neighborhood by Oct. 13 at 11:59 p.m.,” she said.

The projects that are approved will depend on what community applications call for, Williams said.

“We’re being intentional about bringing community stakeholders together,” she said. “In some communities, that has looked like building bridges in the underpasses so that it is green space and it looks like a place where people want to walk and get to the other side of the interstate. And in some communities that has looked like rerouting interstates.” U.S. House Speaker Nancy Pelosi dances with Ricci de Forest, owner and curator of the Madam C.J. Walker’s Museum, during a tour of Atlanta’s Sweet Auburn neighborhood. Ross Williams/Georgia Recorder

While in Atlanta, Pelosi took in a brief tour of some Sweet Auburn landmarks, including the Prince Hall Masonic Grand Lodge, which once held the offices of Martin Luther King Jr.’s Southern Christian Leadership Conference, and Madam C.J. Walker’s Museum and WERD Radio, featuring an eclectic collection of artifacts dedicated to Walker, a Black Atlanta businesswoman described as America’s first self-made female millionaire, and the nation’s first Black-operated radio station.

Speaking to reporters outside Big Bethel Church, Pelosi said the provisions in the Inflation Reduction Act will be a boon for Democrats in November’s election and expressed confidence in her party’s chances.

“We have never, ever thought that the Democrats would not hold the House,” she said. “We have been working on this since the last election, owning the ground and mobilization on a grassroots level, owning the ground, getting out that vote.”

“Given how much money Stacey Abrams and Raphael Warnock have raised from California donors, it’s not surprising that the Queen of California radicals Nancy Pelosi would make an appearance in the Peach State,” said Republican National Committee Spokesperson Garrison Douglas. “Unfortunately for Pelosi, Georgia is over California-backed Democrats that align themselves with Joe Biden.”

5 things we learned about Jan. 6 and Trump from the first hearing