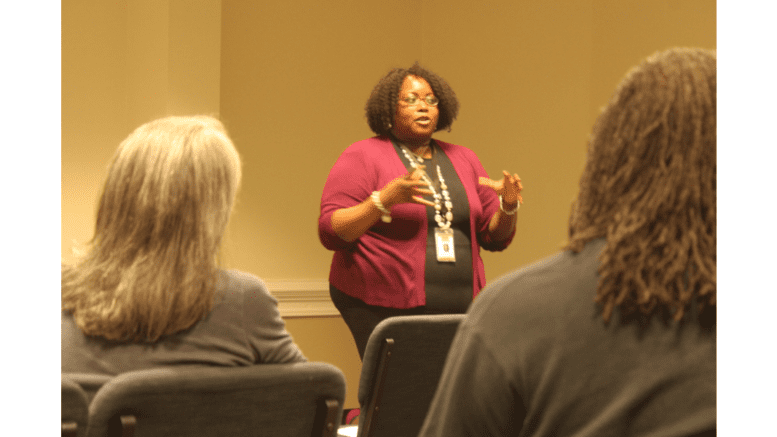 Tuesday evening inside Smyrna Community Center’s Jonquil Room, the city’s newest councilmember hosted her first town hall. Latonia Hines discussed her background, took an opportunity to meet and greet residents, and talked about issues of importance to her.

“This is my opportunity to get to know you and find out what I can do to be impactful,” Hines said. “I like checking things off a list, so I want to know that we have some goals. I’d like to measure those goals and be able to check off that we got something done and if we didn’t then it goes back on the list.”

The Ward 2 councilmember was sworn-in in July.

“My top one is always going to be public safety,” Hines, an executive ADA for the Cobb District Attorney, said. “Public safety comes in so many different ways for me.”

Hines has experience working for the Cobb Solicitor General’s Office. She works in traffic court handling misdemeanors and code violations. She deals with policy, safety, and traffic issues at the Braves Stadium and The Battery.

Public safety in part means regulating traffic to Hines. She is a large proponent of flock cameras, which read license plates, track direction travel, and send information to police.

“I’ve seen a lot of that [flock cameras] in my own work as a prosecutor helping out,” Hines said. “Especially a couple years ago in our East Cobb area, we had a lot of issues of people stealing things out of the mailboxes and things like that, and those cameras really, really helped.”

Lt. Louis Defense of the Smyrna Police Department provided a brief presentation on public safety to residents who attended the town hall.

Defense said crime in Ward 2 was light and the several crimes that do happen in areas like Countryside are not sounding off alarms about a crime spree in the area. He said police will be more vigilant where there is crime.

Defense also said about 25 communities in Smyrna have flock cameras and that most give him access to them. He said the system is very robust and that Smyrna PD has access to Cobb and Fulton County’s systems.

Hines said an event she is considering having for her ward is taking a tour of the new Police Training Center in Ward 7.

She said she is excited about The Quad, Smyrna’s new open-container restaurant greenspace being built in the ward. She said she is concerned about what the city is doing with regard to traffic for the new development.

Hines said she has talked a bit with city engineers about the light timing at Spring Road and also would support more walkable areas in the city.

Community Development Director Russell Martin also presented on upcoming developments in Ward 2 and the overall city, which Hines said she was enthusiastic about.

In addition to The Quad, new developments include but are not limited to:

Hines also said she is coming up with a newsletter hopefully by the end of the month and a calendar to provide updates on events and projects occurring in the city.

The councilwoman said she plans to create an inner committee of citizens within the ward who can update and assist her on events.

“The city has different boards and things like that that you can get appointees to sit on,” Hines said. “But for me, I want to be able to have people within my ward who can tell me what’s going on, who are right there and might be able to get to things that I’m not able to get to. And then we get together and have some meetings and talk about what you learn, what you’ve done, and things like that.”

She wants to create what she called “neighborhood leadership,” in which representatives from different neighborhoods in Ward 2 can notify others about things happening in the neighborhood.

She said it can be a way for neighborhoods to support and be in conversation with one another.

“The other thing that I found to be very disturbing and also at the same time inspires you to do more is when the schools are shut down and you realize that if a child’s not at school, they may not be getting food. And you realize how many food pantries and things that go on that actually helps support the family as well. So those are going to be some of the things I want to kind of encourage us to do, I’m going to try to set up some of those things in our area,” Hines said.

“I’m just here as your security detail,” the mayor quipped, but then became serious. “I’m thrilled that Latonia is in the seat that she’s in. She’s going to represent y’all well, she’s got a servant’s heart and a lot of energy and a lot of new ideas, and that’s what makes this thing go and makes our city so great. I’m just proud that you’re here and glad that you’re having this so early on.”

After the meeting ended, Hines said she was happy about the event.

Even though it was small, she said the conversation with constituents was what mattered most. She said constituents had been emailing her and it was nice to put a name to a few faces.

When asked what being a new city councilmember was like so far, she said:

“It’s been really exciting. I’m going to be really honest, I’ve been very happy — staff here is amazing, they know everything, so it’s been great learning.”

Hines said that although she has worked in government for about 20 years, she has worked for the county and not the city, and she is now more aware of the intricacies that go into running a city.

“There’s always going to be challenges because you have to always measure people’s expectations and you may not be able to fix what everybody wants fixed,” Hines said. “And the things that they might want fixed might be things that really for the overall good of the city are necessary.”

In addition to a calendar, Hines said she is also working on revamping her website.

She will also be having a joint town hall October 4 with Councilmembers Glenn Pickens and Travis Lindley about redistricting and what that will look like for each ward represented there.

As she continues on in her position, Hines said she is looking forward to seeing the impact of her actions.